Who has the biggest holes in their swings?

All players have some hole in their swing. A fun example of this was Pedro Cerrano of the 1989 comedy Major League, who couldn't hit the curveball. Which players today are most susceptible to certain pitches?

Share All sharing options for: Who has the biggest holes in their swings?

In 1989, the American public was introduced to the Cleveland Indians. Those Indians had an offense led by Jake Taylor, Roger Dorn and Willie Mays Hayes, and a rotation with Ed Harris and Rick Vaughn. Despite starting the year slowly, the scrappy team came back midseason to overtake the Yankees and win the division title in a one-game playoff. And to make things even better, their games were announced by the inimitable Harry Doyle.

But back to the fictional Indians. One of the fun players on that Indians team was their voodoo-practicing Cuban right fielder Pedro Cerrano. While a prodigious power hitter, Cerrano had one slight batting flaw: He couldn't hit a curveball to save his life. 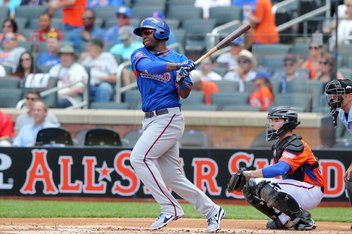 Andrew Ball takes a look at what alumni from previous Futures Games have done in the majors, and discusses what we should expect in general from the current crop.

While Cerrano is a slight exaggeration, there is a point. Specifically, all batters have holes in their swings. Some holes aren't that important, like, say, not being able to hit the knuckleball. Others are a bit more concerning, such as Cerrano's case. So, what players manage to be the ``Heirs to Pedro Cerrano?" Or, in other words, which batters are particularly susceptible to certain pitches?

Two things go into making this team. First of all, the batter has to be particularly bad at hitting a certain pitch. Secondly, pitchers have to realize this. The batter has to see a higher percentage of the particular pitch that he cannot hit. So, we'll look at the seven most common pitches as classified by Brooks Baseball: Four-seam Fastball, Sinker, Curveball, Changeup, Cutter, Slider, and Splitter.

In order to evaluate this, we need some number for this. Again, it needs to account for both the batter's ineptness and the pitcher's recognition of the ineptitude. We'll call this the Cerrano Factor, or CF. The Cerrano Factor is calculated for each individual pitch, and can be calculated as follows.

Now, I realize that 1) not all situations/pitch sequences are the same, 2) not every batter faces the same pitchers, and 3) not every batter faces pitches in the same location. However, for the purposes of this exercise we'll assume that these things reasonably average out over the long run. These factors may bed looked into further at a later date.

Believe it or not, some batters can't hit the four-seam fastball, the main pitch in the pitcher's arsenal. It results in 32.38% of all ABs so far this year, and has a batting average against of .284 league-wide. Now, we'll see that the Cerrano Factors for four-seam fastballs aren't as large as the other pitches, but there are still a few guys that hit below average on the four-seam fastballs, and receive a steadier diet of them than normal.

Reynolds definitely deserves the Cerrano-type moniker for fourseam fastballs, as he strikes out on a whopping 45.1% of four-seam at bats. Some of the other guys are a bit surprising, especially the presence of Ichiro.

Now we'll see some high CFs, especially since the league average against sinkers is so high. The sinker saw 22.35% of the at bats and had a batting average against of .315, by far the highest of the seven pitches.

The changeup generates some high Cerrano Factors, but not as many positive ones as the fourseam or the sinker. The changeup gets 10.76% of the at bats for a .257 batting average against.

And Victor Martinez makes the Cerrano list for a second pitch. He has trouble hitting the pitches that comprise approximately 52.7% of his at bats.

The slider generates some of the lowest batting averages against, so a batter has to be pretty bad against the slider to get a high Cerrano Factor. Yet, there are a few that manage to do so.

We've now reached the true heirs of Pedro, the guys who can't hit the curve. The cruveball gets 9.73% of at bats and batters have a .235 batting average against it.

There are some rough strikeout totals here, including Michael Bourn's 23 strikouts in 45 at bats. The curveball, like the slider, also generates some pretty low ISOs, as both have several members of the bottom fives with ISOs at .000.

As these two pitches combined make up less than 10% of the top seven pitches, I'm not going to go into as much detail. Specifically, I'm only going to mention the two Cerrano Factor leaders for these pitches.

When it comes to the cutter, Mark Reynolds leads his second category. At 11.8% of his at bats and a .158 batting average against, he does much worse than the league averages of 6.97% at .262 BAA. His Cerrano Factor for the cutter comes in at 1.621. Also included in the top five is Evan Longoria.

So, let's combine all the Cerrano Factors to see who has the largest overall Cerrano Factor. To do this, we weight each individual Cerrano Factor by it's percentage of at bats, and then sum them all up. In the end, we see several names from the individual top fives making the overall list.

It's also worth noting the players on the opposite end of the scale, the guys who either don't have holes in their swing, or who don't have it attacked all that often. There are 14 guys with an overall Cerrano Factor of 0, and it's a mixture of guys. There are guys who are considered some of the best hitters this year — Miguel Cabrera, Mike Trout, Paul Goldschmidt — guys who are on the breakout — Matt Carpenter, Carlos Gomez, Michael Cuddyer — and guys who are just lucky not to have their weaknesses attacked — Norichika Aoki, Kyle Seager, and Alexei Ramirez.

To finish things out, I include the full list of players with their Cerrano Factors for each individual pitch and overall. So, to restate the obvious, almost all players have holes in their swings when it comes to certain pitches.

All statistics courtesy of Brooks Baseball.