Second basemen prove quite valuable as they play a premium position, and in recent years have shown more offensive capabilities than in previous decades. It might be time for us to include another name amongst the list of best second basemen in baseball, and his name is Jason Kipnis.

When it comes to top tier American League second basemen, the discussion usually begins with either the Yankees Robinson Cano or the Red Sox Dustin Pedroia, followed by the Rays Ben Zobrist and Angels' second baseman Howie Kendrick. One name that has often been left out is Indians infielder Jason Kipnis. Kipnis plays in Cleveland, which doesn't compare market-wise to Boston, New York, or Los Angeles, and given that Ben Zobrist's calling card is his utility ability, Kipnis ends up as the best 2nd baseman rarely spoken about in the AL.

So, who is Jason Kipnis, and why should we pay more attention to him that the other more widely known names that top the AL 2nd basemen list. 2013 marks Kipnis'3rd overall and 2nd full season in the Majors. Kipnis provides his team with a number of viable tools at the MLB level, combining an ability to hit for average, reach base frequently, steal bases, and some ability to hit for power. He The Indians selected Kipnis with in the 2nd round of the 2009 MLB draft out of Arizona State University, and after 2 years of Minor League playing time, the Indians called Jason up to the big league club in 2011. Since his call up, Kipnis has maintained a stranglehold on 2nd base in the Indians lineup, playing in 152 out of 162 games in 2012 and 76 of the Indians games thus far in 2013.

In 2012, Kipnis did not jump out as a top tier 2nd base candidate, but he put together a solid enough performance, 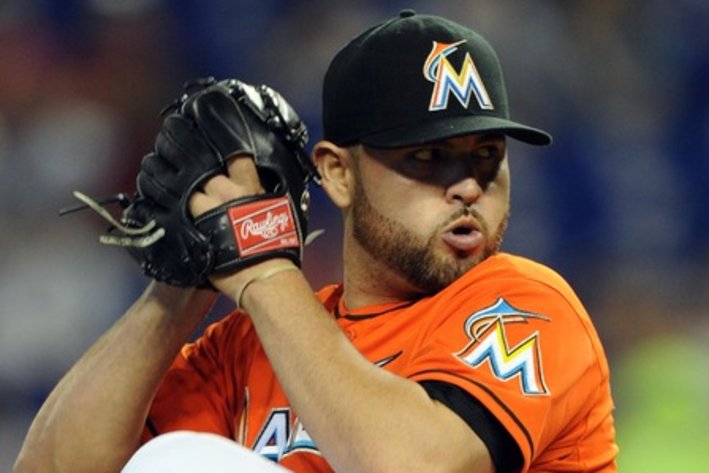 The Dodgers have made a move for Marlins righty Ricky Nolasco, read some more about Nolasco here.

laying the groundwork for his advancement so far in 2013. In 2012 Kipnis put up a 101 wRC+, a .264 TAv, and slashed .257/.335/.531. Kipnis produced for a team that lacked in overall offensive capabilities. He scored 86 runs and stole 31 bases, putting up a 2.6 wSB, and overall average UBR. Defensively, Kipnis also proved worthy, putting up positive UZR and DRS numbers. BP's Fielding Runs Above Average disliked his abilities at second base, which most likely shows that while he performed admirably, Kipnis does not constitute the 2nd base equivalent of Brendan Ryan. Kipnis finished 2012 having provided solid value to his club, posting a 3.1 fWAR, 1.5 WARP, and 4.0 rWAR.

Not all baseball players step into the Major Leagues and immediately produce gaudy numbers. Oftentimes as fans we become spoiled by the likes of Bryce Harper, Mike Trout, and Yasiel Puig inappropriately forgetting that talented players like them who can burst onto the scene already in star-mode are not the norm. Even the mighty Miguel Cabrera didn't put up at least 5 WAR in a season until his 2nd full season in the Majors and 3rd season overall. Kipnis falls into the larger part of that distribution. His 2012 season may not have been of the highest caliber, but it laid the foundation for his budding career, and in 2013 Kipnis has begun to make a name for himself.

At the midway point of 2013, Kipnis looks like a much-improved player. He's slashed .300/.385/.531, smacking 87 hits, 13 home runs, which has led to a .391 wOBA and 153 wRC+. Kipnis is on pace to not only improve in some of the lesser areas of his game, but to improve his game in every aspect. Kipnis put up a 47% ground ball percentage in 2012, but has decreased the number of balls hit on the ground, instead utilizing his strength, squaring the ball up more to the tune of a 24.8% line drive rate and 34.6% fly ball rate. Both of those latter figures denote improvements over 2012 as Kipnis has begun to lift the ball more often, leading to more opportunities for hits. This difference shows up immediately in his results, as Kipnis has improved his ISO from .122 in 2012 to .231 in 2013. He's on pace to hit about 27 home runs, while posting a 12.1% walk rate which ranks 2nd among all MLB second basemen behind only Dan Uggla. Kipnis provides the two main essentials when it comes to hitting, the ability to get on base and the ability to hit for power. Add in his 19 stolen bases, and you begin to see how valuable an offensive weapon Kipnis has become for the Indians lineup.

In 2012, Kipnis ranked 10th out of 22 second basement in MLB that qualified with enough plate appearances in wRC+. Add in his better than average fielding and base running numbers and his fWAR ranked him 8th out of 22. Thus far in 2013 everything has changed; Kipnis has the top wRC+ amongst second basemen in Major League Baseball, he's tied for 1st amongst 2nd basemen in stolen bases, has the 3rd highest fWAR, WARP, and rWAR. Only Robinson Cano, Dustin Pedrioa, and Matt Carpenter place above him on those various value-based leaderboards, but Kipnis stands out in another way. Kipnis' fWAR makes up 23.5% of the Indians' overall fWAR, showing not only his comparative positional value, but the impressive value he provides to his team. Of all of the awesome statistics associated with Jason Kipnis in 2013, the most impressive one has to be his annual salary. Kipnis' 2013 salary is just over $500,000 dollars, meaning that at the midway part of the season he's been worth about $74,000 per fWIN, while Robinson Cano has been worth about $2.7 million per fWIN, and while those figures could change in the 2nd half of the season, they remain astounding at the present time.

In a short piece for ESPN Stats & Info department, Jason Starrett, mentions Kipnis and his improvement not only from 2012 to 2013 but from April of 2013 to the present time as an important cog in the 2013 Indians lineup. Cleveland faces a difficult task in upending the Detroit Tigers from winning the AL Central, but other than the Tigers, the Indians constitute the only other AL Central team with a winning record. Given the relative strength of the AL West and AL East, the wild card spots seem unlikely final destinations for the tribe, but if players like Jason Kipnis can keep their stellar play from the first half in the second half of the season, the Indians might just surprise Jim Leyland's Tigers.

Although Kipnis hadn't received very much recognition up to this point in his career, or even in the 2013 season, his peers rightfully acknowledged his success by naming him as a reserve to the American League All-Star team. The Beyond the Box Score squad named Kipnis to the same distinction, voting for him as a reserve behind Dustin Pedroia for our more objectively derived All-Star team. This may be Kipnis' first All-Star appearance, but it most likely won't be his last. At 25 years old, Kipnis has just entered his the prime part of his career, and given his contract status and ability to improve from season to season, he could very well become permanent member of the top tier of AL and MLB second basemen for years to come.

Thanks to Fangraphs, Baseball Prospectus, and Baseball-Reference for statistics as well as contract information used in this piece.