Dodgers face tough decision with Crawford and Ethier in outfield

Decisions, decisions. With the return of Carl Crawford from the disabled list, the Dodgers now have four outfielders, all of whom make significant amounts of money -- and one of whom has underperformed all season. Is this the time to trade Andre Ethier, or should the Dodgers keep him as a fourth outfielder?

Share All sharing options for: Dodgers face tough decision with Crawford and Ethier in outfield

In each of the last two months, the National League has had a young talented outfielder burst onto the scene, showing off their baseball prowess, and taking home some mantelpiece hardware with them. In May, Phillies left fielder Domonic Brown did his best "August 2006 Ryan Howard" impression, smacking 12 home runs while putting up a 171 wRC+. In June the focus switched coasts, heading west to Chavez Ravine where Dodgers right fielder Yasiel Puig has dazzled L.A. and MLB fans alike with his cannon of an arm in right field, and his great combination of power at the plate and speed on the basepaths. 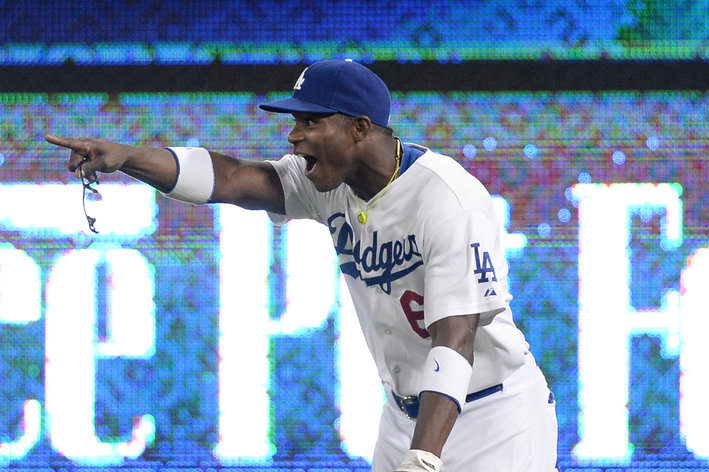 For more information on the Dodgers and rookie phenom Yasiel Puig, take a look at Max's piece which simulates Puig's rookie season, placing it in more context.

Puig's June has almost certainly cemented his spot in the Dodgers already crowded lineup, unless his performance takes a dramatic turn for the worse. In that case, the Dodgers would let him finish 2013 in Triple-A before almost certainly bringing him back up to the majors in 2014. That possibility seems quite distant, but it doesn't detract from LA's current roster situation. Puig got the call up from Dodgers General Manager Ned Colletti when Colletti placed Carl Crawford and then Matt Kemp on the disabled list with hamstring injuries.

Crawford has been resting and rehabbing his strained hamstring for a month now, but his DL stint has come to a conclusion. Until once again incurring the wrath of the injury gods, Crawford had played like a top outfielder. He posted a 1.9 fWAR through 200+ plate appearances, with nine stolen bases, five home runs, a 7.0% BB%, and 13.4% K%. With a healthy elbow, Crawford's hitting mechanics became more comfortable, repeatable, looking more similar to his swing during his tenure in Tampa Bay. Crawford's line drive percentage skyrocketed to 24.2%, the highest of his career. In the past, Crawford has proven that he has the muscle to smack the ball to all fields, then using his speed after the fact to turn singles into doubles, and doubles into triples. Surges in his LD% and FB% are markers of success.

Prior to visiting the disabled list Crawford had also excelled defensively, as well as on the bases. His 14.3 UZR/150 and 4.9 FRAA show at the very least that Crawford had not been a liability in the outfield, and more likely indicate that he was closer to above average in left field. Apart from his nine stolen bases, Crawford's overall contributions on the bases had been positive. He posted a 2.0 UBR and 1.1 BRR prior to hitting the disabled list, performing about as well as a team would expect from the leadoff hitter in the lineup.

With Crawford finally returning from the disabled list, the Dodgers now have four outfielders for three spots. Since returning from his own stint on the DL, Matt Kemp has looked much better than earlier in the season, posting a 123 wRC+ since his return. He's hit two home runs and stolen two bases in the eight games in which he's played, and has looked like his normal self in center field. Given Kemp's improving performance of late and Puig's play, the numbers suggest that Don Mattingly should sit Andre Ethier for the foreseeable future.

Ethier is thus far experiencing his worst MLB season at the plate. His 100 wRC+ constitutes the lowest of his career, and sits well below the 128 wRC+ he averaged from 2008 to 2012. Ethier's BB% has risen a bit and his K% has slimmed down, but this trend shows that Ethier has become more tentative at the plate. His Zone% has gone up from ~ 47% to ~ 49% for 2013, and his tendency to swing at pitches not in the strike zone has dropped from 33.4% to 29.1% from 2012 to 2013. These changes in plate discipline suggest a hitter who lacks confidence at the plate who gets down in the count early. He isn't capitalizing on pitchers' mistakes, as seen from his 5.6% HR/FB percentage and measly five home runs on the season.

Ethier has barely held his own at the plate, and "barely held his own" applies to his defense as well. Andre's 0.5 UZR/150, 3 DRS, and 0 FRAA all show an average outfielder who probably makes just as many mistakes as above average plays. Currently Ethier posts a negative UBR, wSB, and BRR, which means he isn't even contributing anything positive on the bases those few times he manages to get on base.

Given Crawford's return from the DL and Puig's MLB breakout, Ethier's name has come up in numerous trade rumors. This would seem like the logical step for the Dodgers, except that Ethier has become very untradeable. The Dodgers inked the outfielder to a 6-year, $96 million contract that began this season. Ethier will make $15.5 million in 2014, after which his annual salary will rise to $18 million for 2015 and 2016, ending in 2017 with an annual salary of $17.5 million. Given Ethier's age of 31, his recent decline in performance and his newly minted and bloated contract, few teams will be willing to pony up anything to gain Ethier's services for the next half a decade.

Despite the apparent difficulties involved in moving Ethier, Mark Saxon of ESPNLosAngeles.com makes the case that an Ethier trade is more likely than most think.

"At the end of this season, Ethier will have four years and $71.5 million left on his contract. Nick Swisher signed a four-year deal with the Cleveland Indians for $56 million, plus a fifth, vesting year that could bring the total value of his deal up to around $70 million. They're not identical players, but they're certainly similar players. So, while people have speculated the Dodgers could have to swallow as much as half of Ethier's contract to move him, that seems like an overshot."

Saxon makes a good point in that if the Dodgers are willing to pay at least 30% of Ethier's remaining contract, some teams will show interest, and one might even pull the trigger on a trade. In a piece on Mike Scioscia's Tragic Illness, Mike Petriello makes the case that due to the obstacles involved in trading Ethier and the obvious injury risks involved in playing Carl Crawford everyday, the Dodgers might be better off biting the bullet and keeping Ethier as a fourth outfielder and first in line to replace one of the starters if and or when one gets injured. Petriello titled his piece, "Unpopular Opinion: The Dodgers Shouldn't Trade Andre Ethier." In the article, Petriello says this:

"Again, if there's somehow a good deal to be made for Ethier, I'm fine with that. I just don't think there really is, at least not in the way that casual fans won't think the Dodgers have been completely ripped off...We know a lot more about each of those guys now, and after months of seeing far too many starts from Hairston & Schumaker & Van Slyke, too much talent is preferable to too little talent - no matter what the paychecks read."

With less than a month remaining until the trade deadline, the Dodgers can sit tight while watching to see if Crawford stays healthy and productive, all the while hoping that a contending team's key outfielder goes down with an injury and goes searching for his replacement via a trade. Teams rumored to be involved include the Mariners, Royals, Mets and Rangers -- but barring any major disruptions in the status quo, none of those teams would answer Ned Colletti's phone calls concerning Ethier without the assurance that the Dodger's would pick up a hefty piece of the outfielder's contract. It's quite possible that 2013 constitutes an aberration -- it's just one season of paltry play amidst numerous productive ones. Yet, the question that currently looms over Ethier is whether his future will be spent wearing a Dodger's uniform or that of a different team.

Thanks to Fangraphs, Baseball-Reference, and Baseball Prospectus for statistics used in this piece.