The Marlins righty looks to be on the move, perhaps in the next few days. Where is going, and what should the return be for Miami's ace?

With the Orioles' acquisition of Scott Feldman yesterday afternoon, the trade season has officially begun in Major League Baseball. Every year the most sought-after asset in the month of July is starting pitching, as many contenders look to bolster their rotation. Typically we have seen some real front of the rotation pitchers moved near the deadline, with aces like C.C. Sabathia, Randy Johnson, and Curt Schilling just a few of the names that have been traded in the month of July. So who's the best pitcher we can expect to be on the move this year? Well unless the Phillies get a real ransom for Cliff Lee, it may be Ricky Nolasco of the Miami Marlins.

Disappointment aside, Nolasco can certainly help a number of contending teams down the stretch and in the playoffs. Who are these teams and what should they be willing to give up for Nolasco? Let's dive in to find out.

The Marlins' decision to trade Ricky Nolasco was made way back in November, right around the same time that they sent the majority of their Major League roster to the Toronto Blue Jays. To be fair, the decision doesn't have much to do with performance - rather it has to do with the fact that Nolasco is taking up approximately 23% of Miami's 2013 payroll, and he's a free agent to be that has little interest in re-signing with the team this offseason. In that case it makes perfect sense for the Fish to cut bait (bad pun not intended).

On to the most important question: how good is Ricky Nolasco? If you're reading Beyond the Box Score, and you subscribe even partially to DIPS Theory, then you know that this is a difficult question to answer. Below you can the top-10 differences in ERA and FIP since 2006 among pitchers with at least 1,000 innings.

Over a season or even two the difference is understandable, but this is over 1218.2 innings, a considerable sample size. And it's not just FIP that shows a large difference as his xFIP (3.78), SIERA (3.82), and tERA (4.30) are all significantly lower than his ERA (4.45) over the same time frame. To put it all in perspective, over the same time Nolasco's ERA- of 108 matches Joe Blanton and Barry Zito, while his FIP- of 92 is in line with that of Royals' ace James Shields. At this point, I think Nolasco needs to be judged more on the ERA, but it's still interesting to note the stark difference, one that's probably worth more discussion in another article. 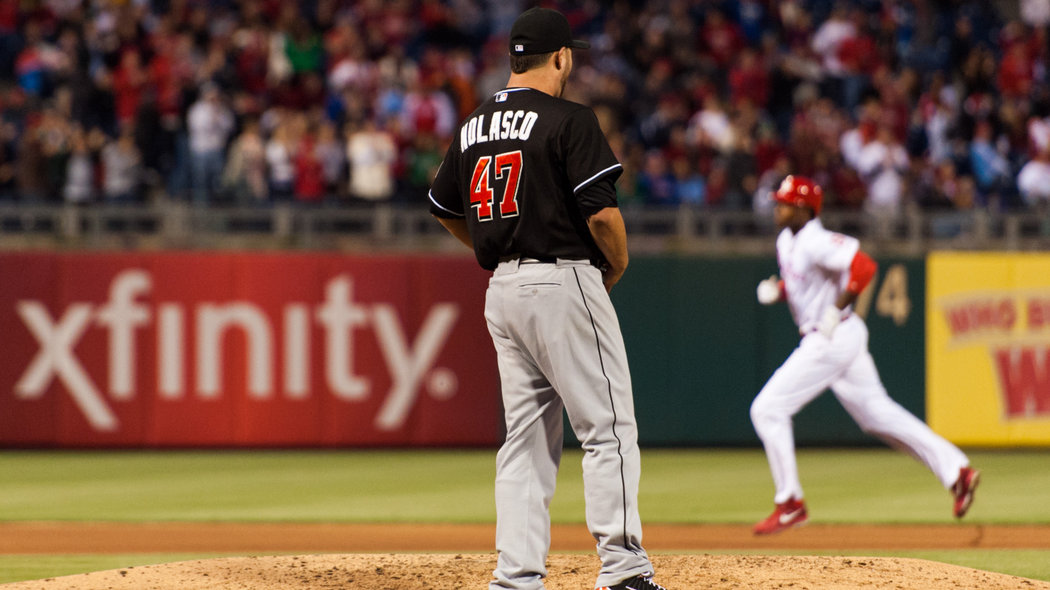 Want to follow the rumors on Nolasco and all of the Marlins that may be on the Move? Fish Stripes has you covered.

Back to the point -- Nolasco's competence as a starting pitcher in 2013. After striking out nearly a quarter of the batters he faced in 2009, Nolasco has seen his strikeout rate fall all the way to 15% last season, while his walks slowly ticked up towards 6%. A simultaneous drop in strikeouts and increase in walks is never a recipe for success, and his 1.5 fWAR in 191.0 innings was easily his worst mark as a professional. Somehow though, possibly motivated by his impending free-agency, Nolasco has regained some of what made him a quality mid-rotation starter. He is missing bats at his best rate since 2010, largely impart to generate more swings in misses on pitches in the strike zone. Pitch selection wise, and velocity wise, he looks very much the same pitcher as the last two years, but he is make more quality pitches and getting results. Once again his FIP is better than his ERA, but even judging by ERA Nolasco has been right around league average and the numbers look sustainable.

Some may cite durability as a concern for Nolasco, but I think we can firmly push those worries aside. Despite missing a start here and there, Nolasco has started at least 31 games four of the last five seasons and he has thrown 397 innings over the past two seasons, which is much more than can be said for some of the other pitching on the market this year.

Speaking of the starting pitching market, what's it like this year? Let's take a look. 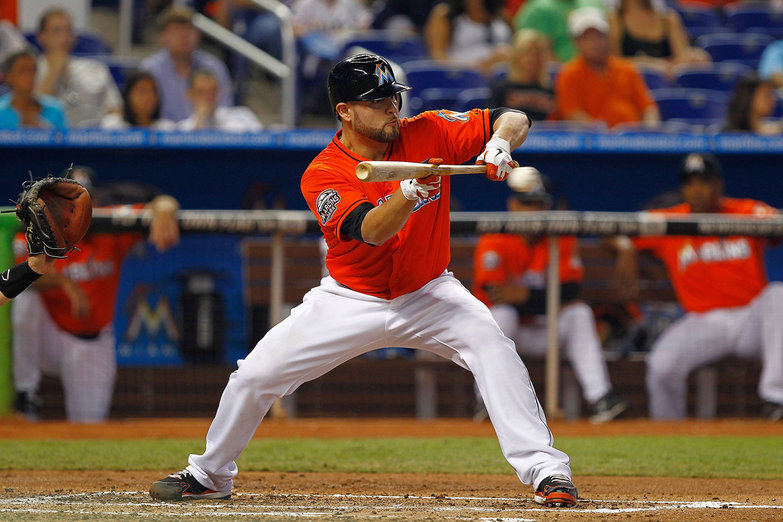 In addition to Miami, there are a few teams that will definitely not be looking to acquire anything this July. Seattle, Houston, Milwaukee, Chicago (NL), Chicago (AL), Minnesota, New York (NL), and Los Angeles (AL), and Philadelphia all appear poised to rebuild. You could make a case for another team or two, but let's stick to this list for now.

Among the 45 starting pitchers on those teams, you would think there would be more pitching to be had for contenders. However, Nolasco looks mighty intriguing when you see that other names available include Matt Garza (a bigger injury risk), Jake Peavy (a bigger bigger injury risk), Yovani Gallardo (absolutely terrible lately, and this year in general), and Jason Vargas.

There are a lot of contending teams that could use rotation upgrades. Actually of contending teams, maybe only Detroit, Tampa Bay, Boston, and Atlanta aren't actively pursuing some sort of pitching help. With that in mind, let's focus on the three teams that have the most traction, the Dodgers, the Rockies, and the Rangers.

If you hadn't noticed in the offseason, the Dodgers really want to win this year. They spent a good amount of money to make themselves contenders, and in spite of the injuries and poor performances they've had to this point, they still are in a position to win the National League West. To do so, though, they need to upgrade a rotation that will be without Josh Bekett and Chad Billinglsey for the rest of 2013. Nolasco would slide right into the fourth spot, moving either Stephen Fife or Chris Capuano to the bullpen and giving them a solid rotation.

It's apparent that the Ned Colletti and the Dodgers agree with this assessment too, because a Miami-Los Angeles swap has been rumored for weeks now. The sticking point seems to be that Miami wants to shed the entire$5.75 million left on Nolasco's contract plus get a quality prospect or two, while the Dodgers seem more inclined to simply take the salary without giving up much prospect-wise. I understand not wanting to give up Corey Seager, Zach Lee or some of the other top prospects, but I think a B-level arm like Chris Withrow, Matt McGill, or Ross Stripling shouldn't hold the Dodgers back from doing acquiring Nolasco. Especially considering I give them a better than 50-50 shot at resigning him this offseason, if they so desire.

With Coors Field taking much of the blame, the Rockies have always been a team built on offense that struggles to find even league average pitching. This year, however, Jhoulys Chacin (83 ERA-), Jorge De La Rosa (72 ERA-), and Tyler Chatwood (50 ERA-) are really the driving force behind the club's success. Still adding Nolasco in place of Roy Oswalt or Drew Pomeranz would make a huge difference in the composition of this club.

Yet, I just don't see this deal happening. Oswalt and Pomeranz, while not great options, are both decent Major League pitchers and neither is suited to pitch out of relief. The organization also has Juan Nicasio and Jeff Francis in Triple-A, so I think they may stand pat or look at one of the lesser starting pitching options available.

If they did decide to make a move, I think the package would have to be similar with maybe an expendable Corey Dickerson plus the full salary, or Drew Pomeranz and part of the salary a strong enough package to entice the Fish.

Starting pitching is supposed to be a strength to the Rangers, but significant injuries to Neftali Feliz, Colby Lewis, Alexi Ogando, and Matt Harrison over the past two years has changed that. Nolasco would immediately slot in behind Yu Darvish and Derek Holland, but I have my doubts on well he would succeed. Pitching his whole career in a quality pitcher's park in the National League, Nolasco has been about a league average pitcher in terms of ERA. Move him to Arlington to and the American League and we can expect some numbers to look worse, I'm sure. If I was Texas I may opt to pursue a riskier pitcher in Peavy or Garza, both of whom have at least proven they can succeed in the American League.

Again if they want to make a deal, Texas could trade almost any one of their 9,000 high ceiling prospects and no salary relief, or a Justin Grimm/CJ Edwards type along with taking on Nolasco's remaining salary.

The Dark Horse -- The Baltimore Orioles

Yes this contradicts everything I just said about Nolasco moving to the American League, but considering Baltimore's pitching I would take the risk. Currently the Orioles' 4.41 staff ERA is the second-worst in the big leagues, only ahead of the Astros. Even with the newly acquired Scott Feldman to pair with Chris Tillman, Baltimore doesn't have the pitching to compete with the other contending teams in the AL in a playoff series, a real shame because the Chris Davis led offense is good enough to bring home a championship. If they do decide to get involved I would think Zach Britton, or Nolan Reimold could headline the deal to work something out for both teams.

Is Ricky Nolasco going to be a difference maker for any time? No, I can't say that he will be. Still, while Nolasco may only be a solid No. 3 starter, he's one of the best pitchers on the market and he can definitely improve the playoff chances for a team that does acquire him.

All data was pulled from FanGraphs and Baseball Reference.