The Beyond the Box Score staff has voted, and now we're presenting this year's NL All-Star Game reserves!

Over the last two weeks, the staff at Beyond the Box Score has been crunching the numbers, watching the tape, and submitting our votes for the players deserving of All-Star consideration. After announcing our AL and NL starters last week, and our AL reserves on Monday, it's time to announce the rest of the Senior Circuit All-Star squad.

While this team doesn't have the raw Davis / Cabrera / Trout firepower of the AL starters, it's a solid, deep squad that's also very strong defensively. Plus three Cardinals!

To recap, here's our process for deciding on the reserves: 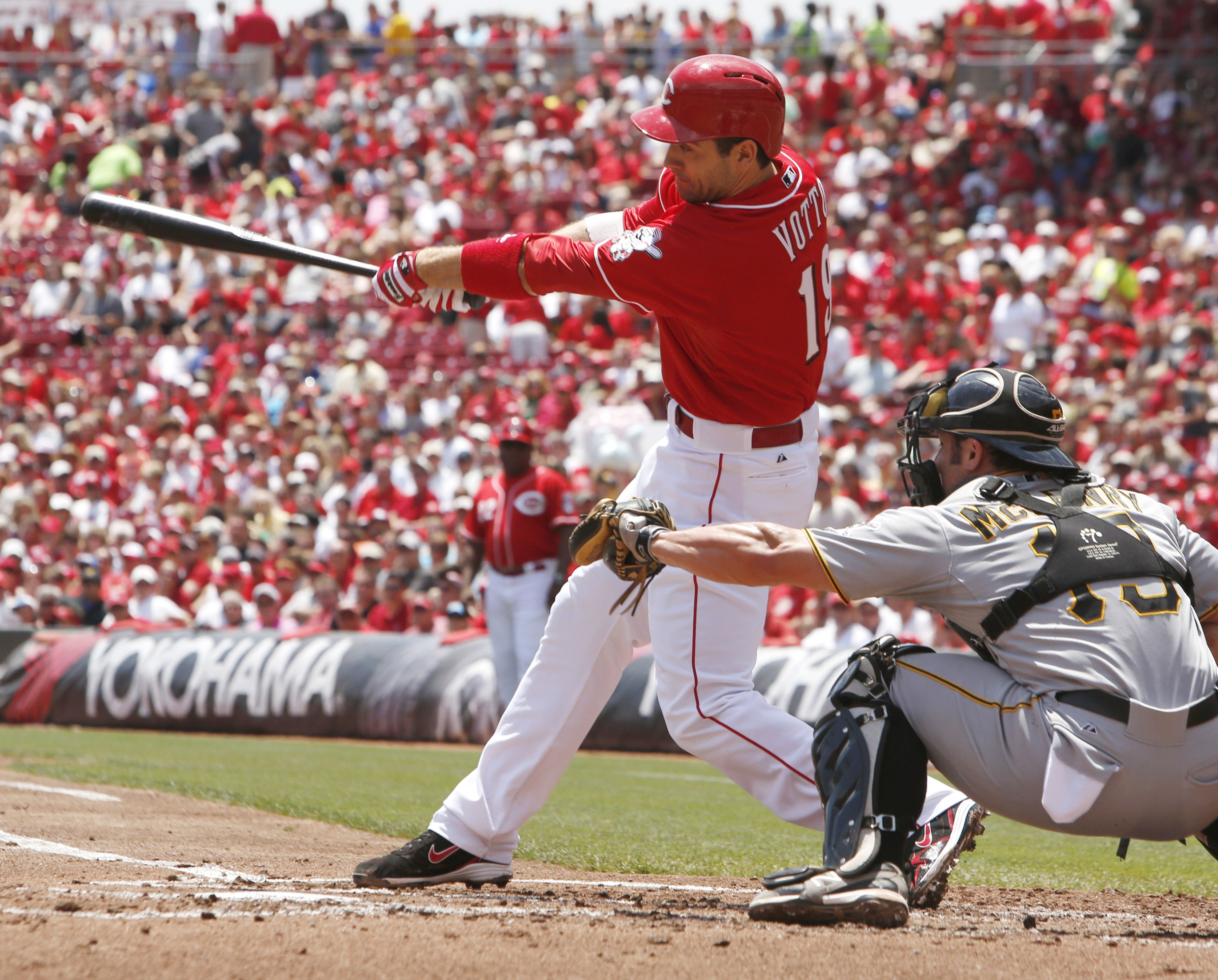 How was the voting for the BtBS NL All-Star starters?

Not too tough to follow, right? Let's have it -- our National League position player All-Star reserves!

Here's a rundown on each of the players who've made the team.

He's just the reigning MVP, a dominant offensive force who happens to play the most demanding position on the field. And he's an underrated receiver, in my opinion, and according to Matt Klaassen's catcher defense metric. Is he the best catcher in baseball? Maybe. Definitely in the top-3.

As I mentioned on the most recent BtBS Podcast, I think that Martin is fully deserving of his spot on the NL All-Star roster. This is a guy who's hitting above league average (wRC+ of 118) for any position, let alone catcher. He's a great pitch framer, he's gotten good reviews as a game-caller, and is a solid receiver. That's an All-Star.

Scutaro has really shone since coming over to the Giants in the middle of 2012. As long as his batting average on balls in play is high, then he's a solid offensive weapon for his position who can cover the plate and get on base. He's been doing that well in the City by the Bay.

Frazier was a bit of a point of contention as the backup 3B for our squad. Votes were split between Frazier's power and OBP (and that's it), Pedro Alvarez's power (and that's it), Ryan Zimmerman's on-again-off-again David Wright impersonation, and Chase Headley's down-but-not-out season in San Diego. In the end, Frazier might be the best hitter of the bunch when you look at both 2013 and the second half of 2012.

I guess you could consider Segura the centerpiece of the Zack Greinke-to-Los Angeles of Anaheim, and he's been wicked useful to the Brew Crew this season. While many talent evaluators saw Segura as a low-ceiling type of prospect, Segura crashed through the ceiling this year, posting a 3.4 fWAR and flashing surprising power with 11 homers to complement his 24 steals.

Then again, if stolen bases are what you're after, Everth Cabrera is the shortstop for you. Cabrera's been about as good as Segura this season, just in a slightly different way. Cabrera is a slick fielder who's already stolen 31 bases and racked up half a win of value on the basepaths. Cabrera's our token Padre, and the voting wasn't particularly close.

Marte has emerged this season as a do-it-all type of left fielder ... something very similar to his outfield cohort Andrew McCutchen, albeit with a little less power. He's been a plus-plus baserunner (23 stolen bases), a solid defensive fielder (7.6 UZR), and a .349 wOBA.

There's room for the original five-tool Pirates outfielder on our All-Star team as well -- McCutchen isn't having a near-MVP season like he did in 2012, but he's producing. You can basically take Marte's stat line, boost the offense a slight bit (up to a .354 wOBA) and move his position from corner outfield to center. And you wonder why the Pirates are winning?

So, maybe he's not much of a center fielder, but what Choo can do is hit. His 147 wRC+ is impressive, but that .420 on-base percentage is a real eye-opener. The only players getting on base at a better clip than Choo are Miguel Cabrera and teammate Joey Votto.

After two seasons posting about two and a half wins, Dexter already has two and a half wins with half the season over. He's already got as many stolen bases as he did last year, and nearly as many home runs -- 10 compared to 13 in 2012. At 27, he's just hitting his stride.

If you ask me, there are two other outfielders doing phenomenal things in small(er) samples who deserve consideration here: Bryce Harper and Yasiel Puig. Both of these phenomenal young hitters would certainly have earned more votes had they been playing a full season.

On to the pitchers!

Matt Harvey has pitched 176 and one-third innings in the major leagues, or a little bit under a full season's worth of innings. He's posted a 2.25 ERA and a 2.44 FIP with 202 strikeouts. That's a unanimous All-Star.

Kershaw has only posted a 1.93 ERA in 130+ innings this season, and that's coming off two years of Cy Young or near-Cy production. I'm not sure any team would fail to trade their best pitcher, straight up, for Clayton Kershaw. He's another no-brainer All-Star.

Lee has been one of few bright spots for the Phillies this year, holding down a disappointing Philadelphia rotation. He could be the national Minister of Command, as he continues to walk virtually no one (4.3% walk rate) and is perhaps having the best season of a great career.

I'm not sure anyone expected Miller to be quite so effective in his first full season, despite his impressive prospect pedigree. Instead, he's become part of a wicked one-two punch with our All-Star starter Adam Wainwright. Like the four starters above, there was virtually no question about his place among the top NL starters this season.

Stephen Strasburg may get the best press, and Gio Gonzalez may rack up more strikeouts, but Jordan Z has been the best starter on the Nationals this season. He might never be an elite strikeout pitcher, but his walk rate bests even Cliff Lee's (3.6%) en route to a 65 ERA-.

Sure, The Shark is the token Cub on this team -- but he had a great case to make the team in spite of team requirements. The ace of the Cubs staff has actually improved on his breakout 2013, making him one of the few quick relief-to-starting transitions that have worked out even better than his team could have thought.

Another "token" selection, this time for the woeful Miami Marlins, Fernandez was a shocking addition to the Marlins rotation, jumping straight from Single-A to the bigs at 20 years old. To be posting a 2.72 ERA with a 25.1% strikeout rate at that age might even warm the heart of the most jaded Marlins fan.

So here's the story -- in our Wild Card voting three players tied with the same number of votes: Homer Bailey, Patrick Corbin, and Michael Cuddyer. Up until July 3, I was going to give the tiebreaker to Cuddyer to have the same number of position players as the AL squad. Then Homer Bailey threw his second no-hitter in less than one calendar year and, guess what? That's the tiebreaker right there. Welcome to the All-Star game, Homer.

From being a minor-league pickup by the Phillies to revitalizing his career and striking out over a dozen players per nine innings (actually 41.9% of batters faced) for the Pirates, Grilli has been a great story. His 1.72 ERA and 0.85 FIP make him just about the best closer in the game right now.

While the Pirates may have thought they were downgrading from Joel Hanrahan to Melancon during the offseason, the reality is that they have done anything but. There is an argument to be made that Melancon has actually been better than bullpen-mate Grilli, posting a 0.89 ERA in a little over 40 innings.

While this isn't a team that needs another Cardinal on it, Rosenthal's been pretty sharp in his time in the 'pen. The hard-throwing righty has cooled a bit as the season has gone on, but his triple-digit heater and surprising control has led him to be an elite arm in the bullpen -- at least for now.

Last year's definite No. 1 reliever has been simply great, rather than legendary this season. After two seasons of three-win production, Kimbrel -- the token Atlanta Brave on our team -- has seen his strikeout rate slip all the way to 36.1%, which is still good enough to make him a top closer.

All of our ballots through both phases of the voting can be found in a Google Doc here.

Did we do alright? In the comments below, we want to hear from our readers. Who is the biggest omission on our NL team? Would you have voted the same way as any of our contributors? Leave us a comment below, or hit us up on Twitter, and we'll be happy to respond.