Each season we are treated to an exhibition made of the best prospects in baseball known as the Futures Game. What should we really expect for the players that play in the game?

As a prospect enthusiast, one of my favorite events of every baseball season is the Futures Game. How can you not love it? There's just no other game that offers the same collection of Minor League talent and overall prospect goodness on one field at the same time.

But for those that don't enjoy watching the game quite as much as I do, maybe it's because they're unsure of what exactly they're watching. Because while the game is called the "Futures" game, it's rather ambiguous just what the future is for these players. Luckily, using WAR we can look back at the past to determine just what the future may hold for the participants of my favorite exhibition game.

But before we get into some more detailed analysis, let's first answer a very basic question: How often do the participants at least become future big leaguers? From 1999-2011, 554 different players were selected for the game, and of those, 479 have reached the big leagues. That means 86.5% of the rosters from the first 13 Futures Games have some sort of service time, and that number will continue to increase a bit over the next few seasons as even more players get the call. Below you can see the percentages by year: 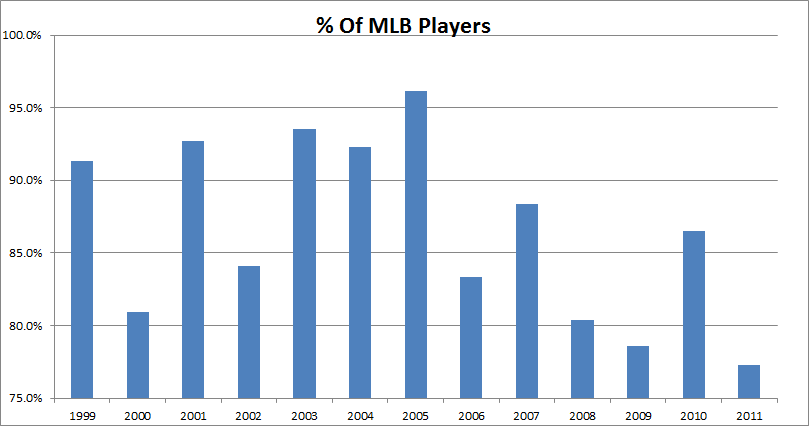 Now that we've established that the vast majority of these players become Major Leaguers, we're going to focus on that segment for the rest of the analysis, ignoring the small fraction that has been derailed by injuries or poor performance before reaching baseball's highest level.

With that in mind, let's talk time frame. Sure, these players may play in the big leagues, but how long will we have to wait to see them debut? Considering the same 1999-2011 time frame, the average time it takes them to debut is less than one season, 0.818 seasons to be exact. Here you can see the breakdown of how fast players reach the big leagues: 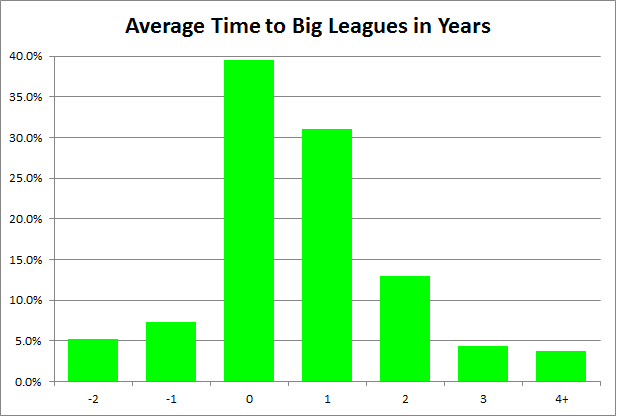 As shown in the graph, the largest percentage of players debuted either in the same season or the year after appearing in the Futures Game. Intuitively, that makes sense since most of these players will either become a post-super 2 promotion, a September callup, or an opening day starter to begin their careers. Two other points about time frame:

The other great thing about the Futures Game? PITCHf/x data for prospects! Using this data, Jared Cross projects the best pitchers in this year's game.

Now we know two things: FG players typically reach the big leagues, and they usually don't waste much time getting there after being selected for the (prospect) midsummer classic. But that's not what we're really interested in, is it? We want to know how good these players will be at their peak and for their career.

Unfortunately, we have somewhat limited data since many of these players are still in the first stages of their careers, but we still can gather a basic overview on the types of players selected for the game. Since we have a better grasp on single season numbers than career totals, we'll start with the peak WAR season. I found the top fWAR season for each of the 479 players, broken down into the buckets that we get from the FanGraphs Glossary on WAR. In an attempt to make this slightly more accurate and useful, I used the updated ZiPS projections for some of the players (17 in total) that are clearly having their best season this year. 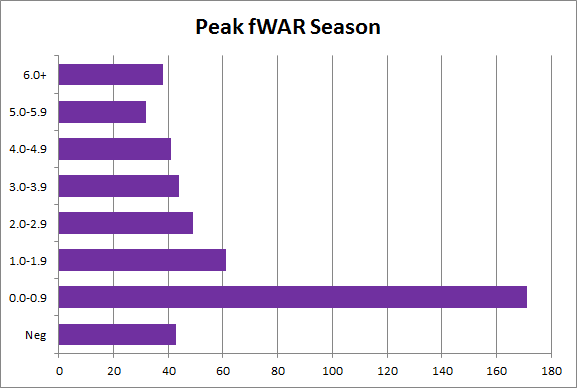 While we should expect good results since we're using a peak season, our FG participants look to turn out quite well as compared to the general baseball population. Almost 40 different players have had one or more MVP-type seasons and the 23% of these players have had at least one All-Star level year. From Justin Bopp's 2010 article, we see that only 6% of players that season were above the 4.0 fWAR threshold. Basically these players can, and frequently turn into some of the top players in the game in a given season.

For our last measurement, we will look at career fWAR, noting that this is even more limited than our peak data because almost all of the best players from the sample are still active. 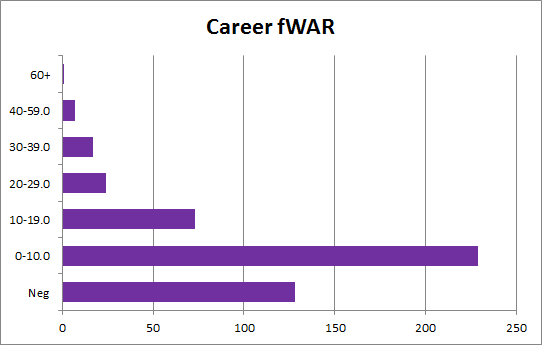 While the data is a bit limited to draw a ton of conclusions, it appears that the future for participants of the Futures Game is rather bright. Many turn into solid big league players, and over 20% of them turn into upper-echelon contributors. So next year when the All-Star break rolls around yet again, be sure not to skip the Futures Game. Because truthfully it's just like watching the actual All-Star Game, just a few years early.