Francisco Liriano is good again ... for the third time. Very few have been able to rebound with such resiliency.

Share All sharing options for: Francisco Liriano and the Rare "Third Peak"

If you’ve used the internet to read about baseball lately, you are likely aware that Francisco Liriano has been amazing this season, helping to anchor a Pittsburgh Pirates rotation that appears playoff bound.

Liriano’s numbers are absurd: 2.16 ERA, 2.65 FIP, 11-4 record, over a strikeout per inning and a groundball rate above 50 percent. It’s a story worth writing about, and one that many have tackled already.

First, BtBS’ own Alex Kienholz wondered if he could maintain his hot start:

While regression is almost expected, Liriano has shown in the past that he can be a dominant pitcher…if he can finish the year with 3-3.5 fWAR the Pirates should be extremely pleased.

Well, here we are at the onset of August and Liriano is at 2.2 fWAR (Fangraphs Wins Above Replacement), on pace for roughly 3.8 by season’s end when you account for his lost April.

That continued production inspired SI’s Jon Tayler to dive into the resurgence:

That’s something that Bryan and I noticed on the BtBS Podcast a few weeks back as well, when we pointed out that in Liriano’s "good" years, his fastball usage has been much lower than in his "bad" years. Coincidence or not, he’s also had a significantly higher groundball rate in those seasons.

But those 250 words of preamble aren’t really what I’m interested in today. A lot of people have opined about Liriano’s improvements and whether or not they’re sustainable. Personally, I’m still taken aback by how a pitcher can yo-yo from being so good and so bad, seemingly over and over again. He's like Rocky Balboa on the mound, getting knocked around in an unholy fashion only to keep fighting back.

As a refresher, look at Liriano’s ERA, FIP and fWAR year by year:

Some ERA fluctuation can be explained by a lot of things – the reason we use defense-independent stats is because a lot of a pitcher’s end result is beyond his control or due to random variance. But FIP, which is meant to dig beneath the surface and suss out how a pitcher is performing independent of his teammates, shouldn’t fluctuate that wildly.

In fact, rarely do pitchers ever show that kind of FIP variance over their careers.

I pulled all pitcher seasons since 1994 (a 20-year sample) in which a starter threw at least 75 innings and sequenced their FIPs over time. I threw out anyone who hadn’t thrown at least five seasons in the span so we could see larger patterns, and then found the standard deviation of pitcher FIPs. (Note: I realize standard deviation isn’t the best measure since a straight mean of unequally weighted events isn’t a true mean, but it’s still going to get us to the same ending for this story.)

But I couldn’t just post the leaders here and call it a day. There are names who struggled and then "found it" and became very good. There are names like Pedro Martinez who had years of elite production and then a couple average years as they wrapped up their career. While those paths create large standard deviations, I’m much more interested in pitchers who fluctuated year-to-year rather than those who had a noticeable change or clear path.

Unfortunately, I don’t quite have the math chops to figure out how to quantify this, so I started perusing the list manually and cutting out pitchers who either started slowly or tailed off during the sample. Basically, I eyeballed for pitchers who were up and down by a significant margin (e.g. not like recent-years Cliff Lee, who went up and down but by fractions of an FIP point). Basically I was looking for multiple peaks and multiple valleys.

And it turns out that Liriano, as you may have expected, is a pretty unique case. The table below shows the examples I identified (minimum FIP standard deviation of 0.75) who had similar up-and-down paths. None are really that close, though, and the fact that Liriano has had three "peaks" remains rare. Chan Ho Park and Javier Vazquez might be comparable, though their peaks and valleys were noticeably longer. 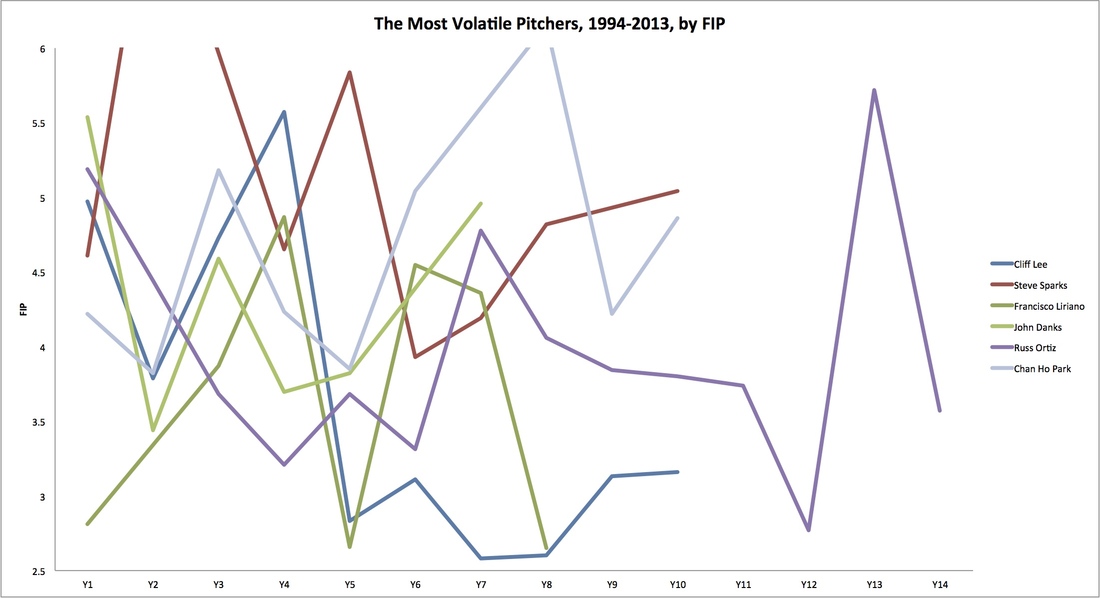 It’s my hope that someone, either via the comments or email, will point me in the direction of a means of quantifying this up-and-down nature. For now, rest assured Liriano’s third career "resurgence" is something most pitchers don’t get around to, due to attrition or an inability to make adjustments or just aging. Of course, you have to be bad at times to qualify here, so Liriano’s somewhat historic position is a pyrrhic victory.

Blake Murphy is a writer at Beyond The Box Score. You can follow him on Twitter at @Blake MurphyODC.

More on Pitching from Beyond the Box Score: