Brandon Beachy, fresh off of Tommy John surgery that kept him out for 13 months, coughed up seven earned runs in less than four innings yesterday. How worried should Beachy and the Braves be?

"I’m not even going to evaluate it. His first outing, it’s (like) coming out of spring training for him, maybe even worse – Tommy John – so we’ll see how he feels tomorrow, throw him a side and go get ‘em in five days."

"I feel good physically, I just need to refine the offspeed, especially. ... It's just something I'll work on in my bullpen -- get some of those breaking balls a little sharper down in the zone when it matters."

According to the webcomic XKCD, the neuromuscular coordination required to throw a ball through the strike zone is akin to dropping a drumstick from 10 stories and having it hit a drum on the correct beat. Brandon Beachy, it seems, needs to kick off a little rust before he can discover that timing again. But in the context of a 17.18 ERA and 8.22 FIP from last night's outing against Colorado, getting the feel of his timing is probably the only thing left for Beachy in his recovery from Tommy John Surgery 13 months ago.

Beachy's velocity last night was back to where it was last season. In his last start before the injury that sent him down, Beachy's four-seam fastball averaged 91.7 mph. Against Colorado, Beachy averaged 91.9 mph. His changeup was even harder than usual (which might be something to keep an eye on down the line). And when he was able to locate his pitches, he got swinging strikeouts. He got Troy Tulowitzki on a slider and Todd Helton on a changeup that were located down and away. He also got 12 swinging strikes overall on the day, so his "stuff" hasn't evaporated.

But too often, Beachy was a hair early on his release and left the ball up over the plate. Here's one example, a high fastball to Michael Cuddyer that was supposed to be knee-high on the outside corner. Cuddyer lined this pitch to center field for a triple. 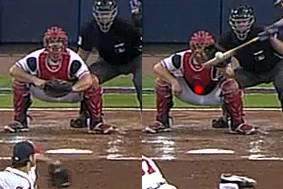 And here's a map of all eight of the Rockies' hits last night: 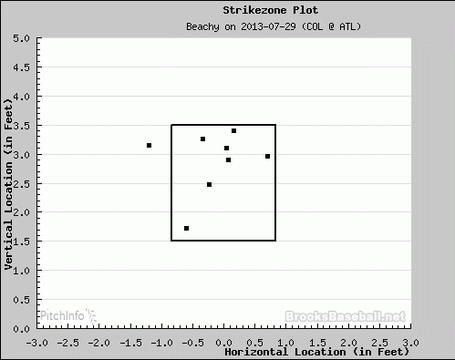 Four of those pitches were fastballs, three were sliders, and one was a changeup.

I didn't notice anything different about Beachy's mechanics. Compare his posture at release point from the game when he injured his arm and from yesterday. 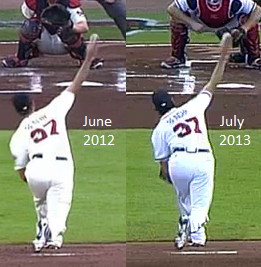 If Beachy's velocity and mechanics are the same, but he's leaving the ball up in the zone after missing a year in the majors, this probably is just a sign that he needs more in-game reps to get his timing back. He also made progressively more of his timing mistakes as the game wore on, suggesting he still needs to build up a little endurance before he's back to his old self. I don't have much doubt at this stage that will happen, though.