David Price stifled the Red Sox for the second time in five days and Jason Giambi is still playing baseball and smashing dingers somehow. Four of the nine games on Monday were decided by a walk-off hit. Recount yesterday's great night of baseball with leverage and win probability statistics!

Yesterday was quite the night for baseball. Fernando Rodney pitched in the most intense situation of the day while Chris Denorfia provided the most win probability in a pinch-hitting appearance against Aroldis Chapman. Monday provided a couple division lead match-ups such as the Red Sox/Rays and Pirates/Cardinals but perhaps the most exciting games involved come from behind wins and clutch walk-off hits. 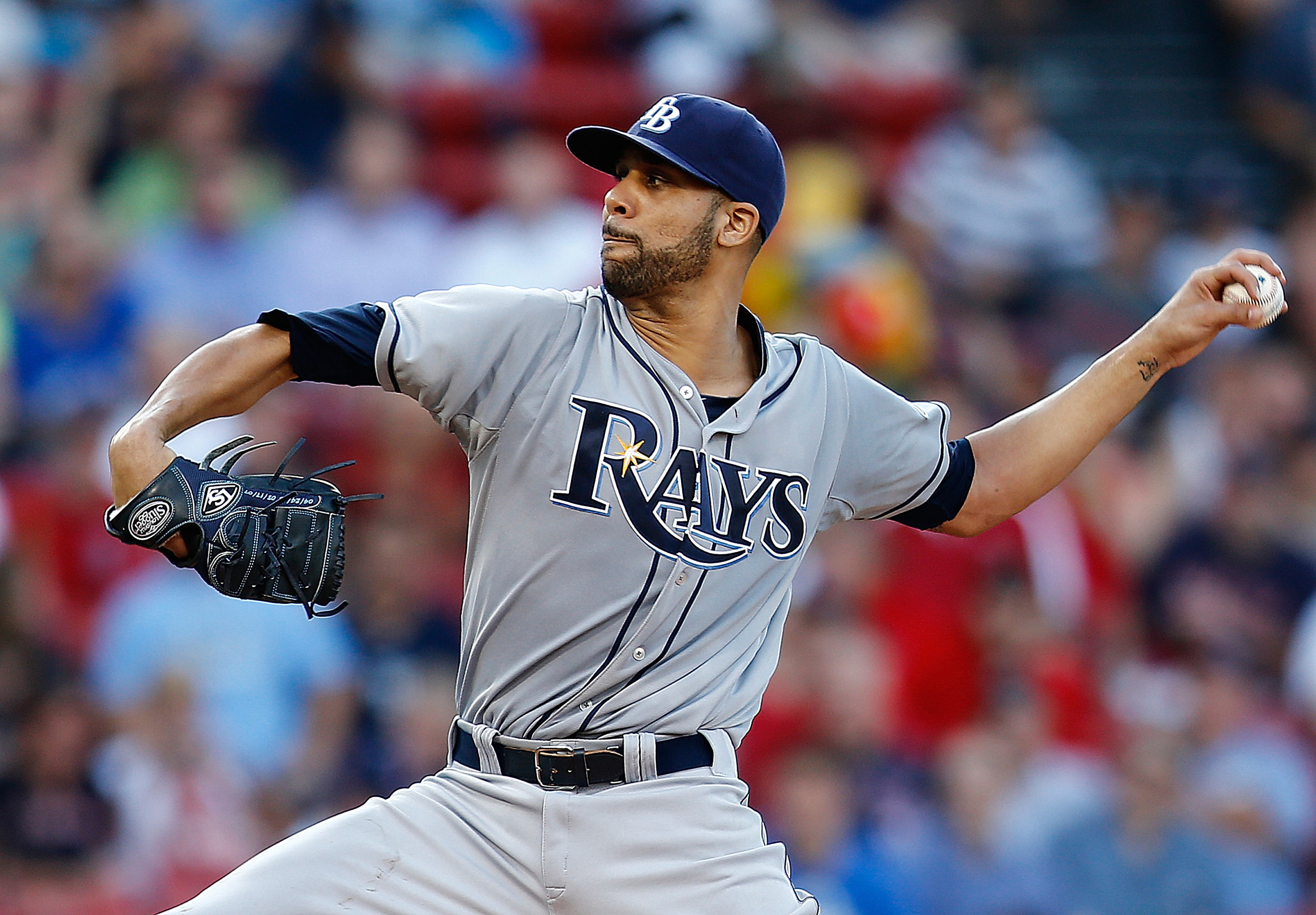 David Price continued the Rays' incredible hot streak throughout the month of July with over seven innings of two-hit, one-run ball. With a 40 minute rain delay, Joe Maddon had a decision to make. Price had just thrown 82 pitches in seven innings. After running the count to 3-0 but coming back to strikeout Jonny Gomes, Maddon pulled the hook on Price and went to the bullpen. Joel Peralta came into the game and gave up two hits but the game was saved by an excellent throw from web-gem extraordinaire, Sam Fuld, who gunned down Daniel Nava at home plate. Fernando Rodney pitched the ninth in the highest leverage situation of the day (5.63 pLI).

Felix Doubront was a bit mroe hittable than usual, allowing eight hits and three walks in just five innings. Boston just couldn't string any hits together against the surging Rays.

Texas had gone 26 straight innings until they scored a run in the sixth inning of yesterday's game against the Angels. Heading into the ninth down 3-2 with Ernesto Frieri coming into the game, the Rangers had a win expectancy of 22.4%. Then, A.J. Pierzynski led off with a solo homer that shot their chances of winning to 65.2%. Nelson Cruz singled but was erased from basepaths due to David Murphy grounding into a double play. With two outs in the ninth of a tie ball game, Geovany Soto smashed a walk-off homerun to win the game (.439 WPA). It's a pretty amazing feat to have two catchers hit a homerun in the same game, let alone the same inning.

Jered Weaver, diminished velocity and all, was able to stifle the Rangers lineup for seven innings, only allowing one run on five hits and six strikeouts. Mike Trout got on base in all four of his plate appearances but the Angels were only able to bring him across home plate once. Matt Garza gave up three runs on five hits in seven innings. On the year, opposing batters are only averaging .220 against the righthander but much can be contributed to his career low .259 BABIP. FIP, xFIP and SIERA all envision some regression coming Garza's way but Texas can only hope that he can continue to outlast the projection of his underlying peripherals.

More on the Angels at: Halos Heaven More on the Rangers at: Lone Star Ball

Another walk-off!! Jason Giambi, 42 years old and somehow still playing baseball, let alone in the major leagues, came off the bench as a pinch hitter and crushed a homerun off of Ramon Troncoso. In just one plate appearance, Giambi added the most winning probability of Cleveland's lineup (.366 WPA) and played in the highest leverage situation (2.24 pLI). Fun fact: Carlton Fisk actually leads in the most number of games over forty years old while contributing over .300 WPA with 18. Barry Bonds was fourth with 12.

Zach McAllister continued his breakout season, hurling seven innings with five hits and two runs. Only managing two strikeouts, McAllister has been far too hittable to have such a low ERA. With a low groundball rate of 37.9% and a meager swinging strike percentage of 6.8%, FIP, xFIP and SIERA all suggest a regression is looming over the Indians' starter. Since we only have two partial MLB seasons as background, it's hard to figure out if McAllister is just better at preventing homeruns. After posting a 12.1% HR/FB rate last year, in 2013 it's down to 6.9%. Only the Steamer projection thinks he'll finish the season with an ERA under four.

More on the White Sox at: South Side Sox More on the Indians at: Let's Go Tribe

Pedro Alvarez hit a three run homer in the bottom of the first and that's all the Pirates really needed to beat the Cardinals. In this battle for first place in the NL Central, Francisco Liriano has officially regained his absolutely dominant 2006 form. With a 2.16 ERA and a FIP of just 2.65, Liriano has been a pivotal asset to Pittsburgh's division race and likely will continue to be. At this point, the Pirates are a shoe-in for the playoffs as Baseball Prospectus projects that they have a 97% of playing meaningful baseball in October.

Jake Westbrook's regression continued yesterday as he allowed four runs on three walks and four hits in just five innings. With a 2013 HR/FB rate (5.8%) just under half of his career average (11.4%) and the lowest strikeout rate of his career (8.5%), all signs point towards Westbrook having an underwhelming second half (4.72 xFIP). Perhaps John Mozeliak and the St. Louis front office are aware of this and that's why we're seeing their name thrown around in Jake Peavy and other starting pitching rumors. As the Reds and Pirates are both proving to be viable contenders this year, St. Louis isn't really a guarantee to win the division.

More on the Cardinals at: Viva El Birdos More on the Pirates at: Bucs Dugout 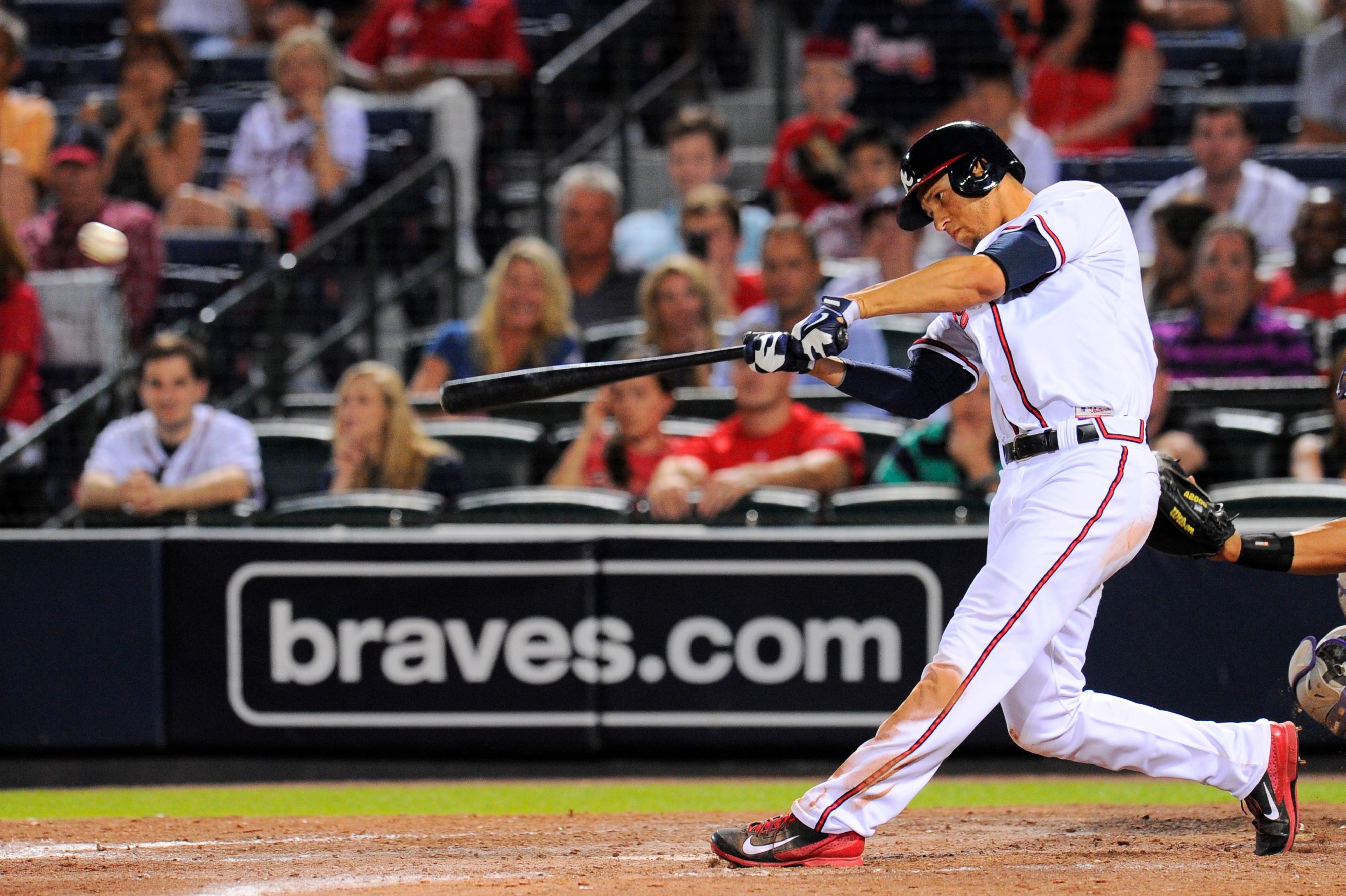 Carlos Gonzalez went five-for-five and tied the game with a single that scored Dexter Fowler in the eighth inning. After Charlie Blackmon led off the bottom of the eighth with a strikeout and the Braves leading 8-7, it surely looked like Atlanta was going to win (91.6% win expectancy). Jordan Walden walked the tying run with Fowler and then gave up two hits to DJ LeMahieu and CarGo, plummeting their win expectancy to 41.8%.

Scott Downs was just traded from the Angels to the Braves and landed in Colorado just to be thrown into one of the highest leverage situations of the day (4.04 pLI), where he excelled, only allowing a hit in 1.1 innings. Dan Uggla led off with a walk in the 10th inning and Andrelton Simmons (.404 WPA) continued his power burst with another clutch hit, this time a triple for a walk-off win.

More on the Rockies at: Purple Row More on the Braves at: Talking Chop

This was another back-and-forth game. The Marlins had an 86.8% win expectancy in the middle of the sixth inning only to see it fall to 34.6% by the bottom of the seventh. Jeremy Hefner struggled with control, walking five and allowing three runs on four hits in under six innings. Jacob Turner got an additional three outs but posted a similar line of five hits, three walks and five runs. Striking out two around a hit and a walk in the ninth inning, Bobby Parnell continued to be excellent in high leverage situations (4.62 pLI last night).

Yesterday's game was quite the pitchers due between Kyle Lohse and Jeff Samardzija. Lohse (.350 WPA) was great in six shutout innings, walking three and allowing five hits but struck out six. Meanwhile, Shark was even better (.436 WPA), only allowing three hits and two walks with seven strikeouts in seven innings. Then the game went to the Cubs bullpen and all hell broke loose. Pedro Strop, believed to be the heir to the closer role if Kevin Gregg were to be traded, allowed five runs in one-third of an innings thanks to a walk and three hits. Only Ernestro Frieri (-.776 WPA) hurt his team's chances of winning more than Strop (-.481).

More on the Brewers at: Brew Crew Ball More on the Cubs at: Bleed Cubbie Blue

The Athletics are 20 games over .500 in late July. Moneyball wins!! Esmil Rogers was run out of the game after four and a third unimpressive innings where he gave up six earned runs on nine hits and three walks. A.J. Griffin stumbled throughout his seven innings but the Blue Jays never really threatened to make this a competitive game after Yoenis Cespedes tripled in the first. In fact, at the end of the first inning, Oakland had an 87% win expectancy.

Yes, another walk-off! Mike Leake and JJ Hoover had completely silenced the Padres for eight innings but somehow Aroldis Chapman and his 100+ MPH fastball couldn't close the door. Heading into the ninth inning, the Reds had an 82.3% win expectancy. Once Yonder Alonso led off the inning with a walk against the Cuban flamethrower, it dropped to 69.1%. Still, when you have as dominant of a reliever as Chapman pitching in the ninth, it's not necessary to get too worried. Until Chris Denorfia crushed a fastball for the longest walk-off homerun in the history of Petco Park. Pinch hitting for Will Venable, Denorfia was thrown into the highest leverage at-bat of the day (5.41 pLI) and amassed a .691 WPA in just one plate appearance.

More on the Reds at: Red Reporter More on the Padres at: Gaslamp ball