Jeff Francoeur was just designated for assignment by the Royals, prompting Grant Brisbee to reflect on his performance and hype back in 2005. Fast forward to the present, and Puig-mania is officially out of control. Is a comparison with Francoeur fair?

Grant Brisbee looked back when Jeff Francoeur was known as "The Natural," famously gracing the cover of Sports Illustrated as a rookie. Brisbee provides a side-by-side comparison of his performance in 2005 and Yasiel Puig's current run, and the numbers are remarkably similar. Francoeur had the bat, the arm, the smile and a similar "electricity" that has some folks clamoring for Puig's presence at the All-Star Game. But Francoeur's lack of plate discipline caught up with him in the following years, despite his self-awareness and desire to improve upon it. From Brisbee:

I remember another quote -- possibly apocryphal, because I can't find it now -- that described Francoeur as teary-eyed when it came to the subject of his poor plate discipline. He wanted to hit .350 with a .450 OBP. He wanted to hit .450 with an .850 OBP.

Sometimes we confuse plate discipline to simply be an approach or choice, not a skill. But the ability to swing at strikes and lay off balls is very much a skill, and an extremely difficult one to master if not innate:

Jeff Francoeur doesn't, and, as Brisbee goes on to explain, it only gets worse with age.

Going back to Puig, every staggering performance by new players these days is met with a sense of skepticism, until we check the "sample size" box. For Puig, the cautionary note has been his aggressive approach, resembling that of Francoeur. I've heard many arguments challenging the fairness of that comparison, most notably that Francoeur had a much longer minor league track record of not dominating. Frenchy also never had the success Puig had at AA, but to that I would say it was merely 167 plate appearances, not to mention he was a year older (22 vs. 21).

Clearly, we can't answer this question today, or tomorrow, or in September. But we can look back on what we've seen to date, and Brisbee watched every Puig hit so far, and came up with five thoughts.

The quick summary is Puig has indeed been an aggressive hitter, but he collects most of his hits on strikes. He also can cover outside pitches, while still turning around inside pitches due his distant positioning from the plate. And yes, he's had some help from the BABIP gods.

Dave Schoenfield from ESPN also examined Puig's hits, and notes that his success was in spite of a .188 "well-hit" average. Like Brisbee, Schoenfield mentions Puig's stance well off the plate, suggesting perhaps off-speed stuff away may be his one hole. But this was hardly an adamant declaration, as Schoenfield agrees that we need more data.

Regardless, right now no one is saying that Puig's aggressiveness will assuredly doom him, much like people saw the glass at half-full with respect to Francoeur in 2005. Their approaches as rookies, much like their results, are very similar, with Puig swinging at more pitches outside the zone.

Many have pointed to Puig's opposite field ability as a sign that he will be less likely to slump, and he has in fact been very adept at going to right field with line drives: 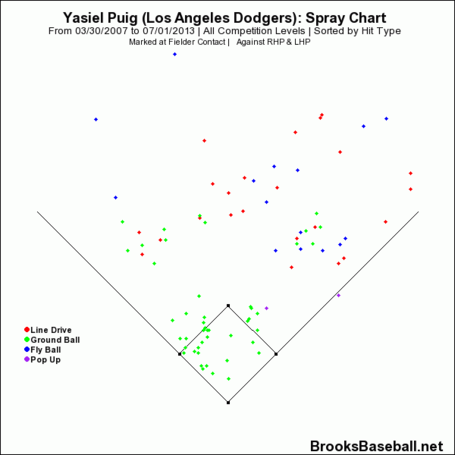 However, over Francoeur's career, he has not showed pull-happy tendencies, with a relatively balanced spray chart. Note that this chart only goes back to 2007, so actually precludes Francoeur's most productive years. But that only reinforces the point. 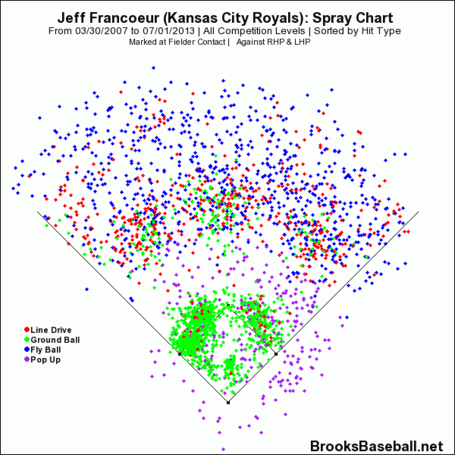 The ability to go the other way is not a be all end all. We know that Puig will have to adjust. Even back in 2006, a conservative article from The Hardball Times portended that Francoeur's walk rate would improve, and the player he was most similar to was Juan Encarnacion. Just last week, Eno Sarris from FanGraphs highlighted Encarnacion as Puig's doppelganger (albeit with a fantasy bent).

The timing of Puig's breakout and Francoeur's release is poetic indeed, though that's far to say that being released as a 29-year-old is Yasiel's fate. But it would almost be irresponsible to not consider Frenchy's career path when attempting to project Puig's future.

All charts courtesy of Brooks Baseball, and statistics from FanGraphs.