Using what we know about Puig Mania, we simulate 1,000 seasons worth of his rookie season. Where will Puig end up if he is really this talented? Will he have a better rookie season than Trout or Harper in minimum time?

Mr. Puig needs no introduction, he seized the opportunity to play ball in America and has become an overnight phenomenon. By finishing up June 2013 with forty-four hits, he arguably had the best debut month since Joe DiMaggio. The only shame in this fairytale story, so far, is that Puig was called up in June rather than starting the season in the majors.

Well, sadly we can't go back in time to convince (beg) Colletti and Kasten for Puig to make the team out of spring training. What's done is done. We can only look ahead.

So, what we can do is simulate what Puig really can do for the rest of the season. What kind of godly numbers is he capable of putting up in his first full half season in the Majors? 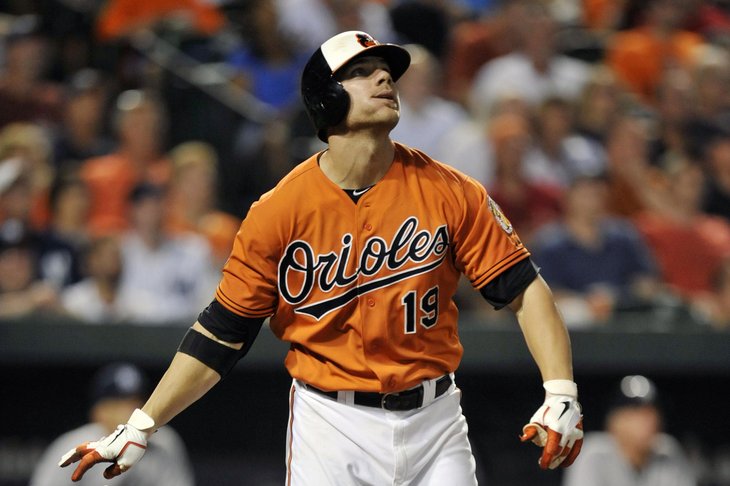 See our similar simulation performed on the 2013 season of Chris Davis.

To simulate the rest of the season for Puig, we will create a matrix of Puig's 2013 data and his ZiPS data, and will let ZiPS assume that he has 293 PA remaining for the rest of the season. In doing so we will simulate 1000 seasons worth of PA, AB, HR, 1B, 2B, 3B, BB, IBB, SF -- all wOBA inputs. Using this simulated data, we can assess the possible seasonal outcomes for each simulated half-season and calculate the corresponding wOBA, ISO, OPS, fWAR and AVG/SLG/OBP. We will take the simulated data, add it upon the already accumulated totals for 2013, and evaluate the possible outcomes for Puig when 2013 ends.

Puig's 2013 data is essentially double weighted over the ZiPS data because it exists in the sample and is also the constant added to the simulated data.

To date, Puig has already accumulated 1.8 fWAR and 2.1 bWAR. Below is the simulated distribution of outcomes for Puig's WAR.

The WAR was calculated by converting the wOBA total into wRAA, then a positional adjustment was added as well as replacement level. The RoS ZiPS UBR and UZR were added to the total, then the entire sum was converted into wins -- 10 runs being one win. We will call this WAR, but note it closely mirrors Fangraphs method of calculating fWAR:

Note: [RoS UBR and UZR will be assumed for the WAR calculations] 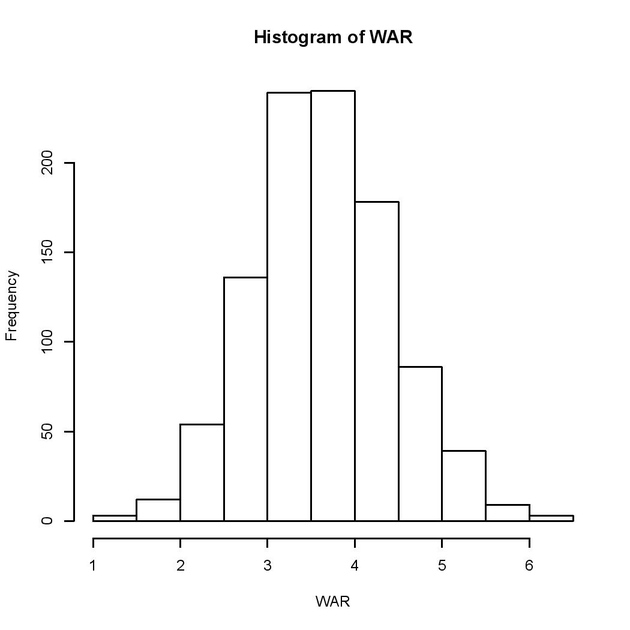 ZiPS had Puig coming into the season projected to be worth 0.8 WAR, and now updated ZiPS has him with the 2.5 WAR. The simulation left Puig with 75% of the seasons with over 3.1 WAR. More than half the simulations had a corresponding WAR totals over 3.6 and a quarter with a WAR above 4.2 WAR. The best WAR in the simulation was 6.44, which occurred once in 1000 simulations.

Puig coming into today, has a wOBA of 0.503. While his full-season wOBA would not be any where near the 0.500's, the simulation came up with impressive totals 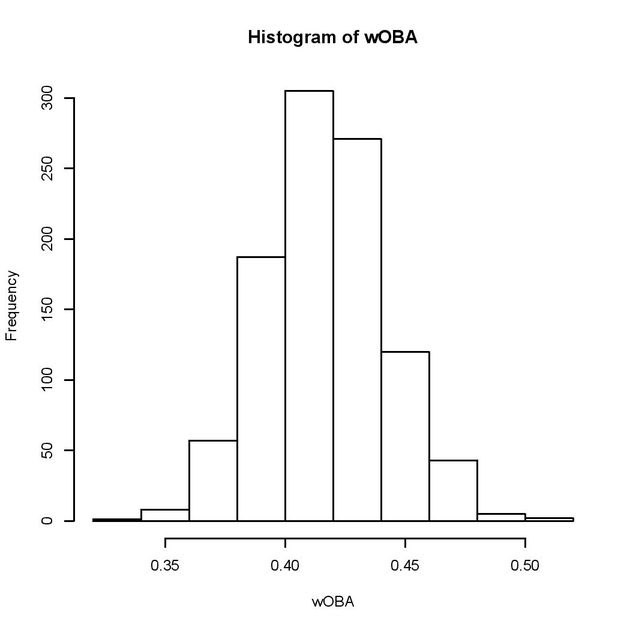 These numbers are ridiculous. I mean, when the simulation 75% of the time has a player with a wOBA over 0.400 you certainly can't complain. Right now that 0.500 wOBA seems unrealistic, but Dodger fans would not complain with Puig sporting an wOBA over 0.400 for the rest of the season.

Let's see what the simulation thinks:

Below is the distribution of the simulated home run totals: 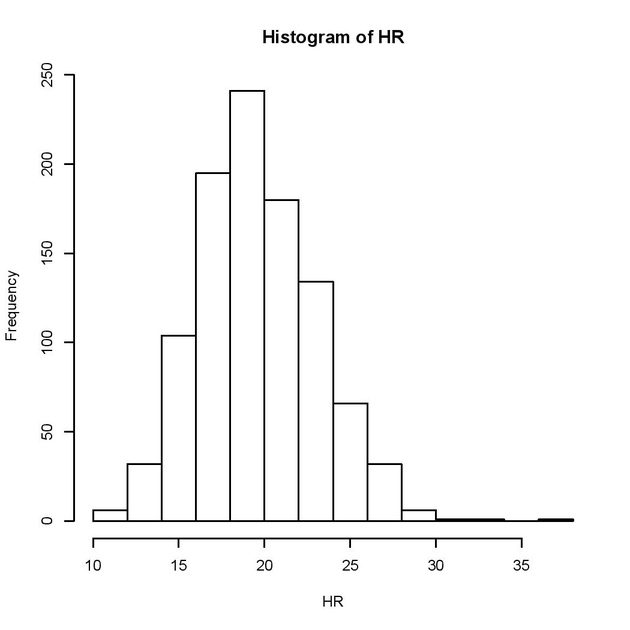 If you look at the histogram above, Puig is likely to hit over twenty home runs with 53% of the simulated seasons having reached that plateau.

Let's put all of this together. Using the quantiles of the WAR, we take each representative season and show you the entire picture of what that season would look like.

Below are the best and worst case scenarios for Puig's rookie season according to our simulation:

So, there it is -- the possible outcomes for Yasiel Puig's rookie season. While these simulated totals are not Trout-esque, these numbers are good enough to make his rookie season one of the best ever given his expected limited play time. The best case scenario has Puig in Mike Trout territory had he been given a full season worth of PA's. Just looking at the projected WAR/650 makes you wonder what Puig could have done given a full season to work with.

Right now, Puig is on a fast track to stardom. While he is bound to slow down, as the simulation suggests, Puig is a refreshing talent that is a welcome addition to the baseball's next class of stars.

Whatever comes, watching the evolution of Puig over the rest of the season will be more than exciting.

Max Weinstein is a staff writer for Beyond the Box Score.
You can follow him on Twitter @MaxWeinstein21.