The Next Cub To Go

Nate Schierholtz has been waiting in the wings for weeks wondering where he might end up after the July 31st trade deadline. Logically, he is the next Cub to be traded, but to whom, and when?

Share All sharing options for: The Next Cub To Go

The Chicago Cubs haven't been cagy in the slightest. Theo Epstein, Jed Hoyer, and company made it clear, and rightfully so, that when it came to the trade deadline, the Cubbies would prefer to sell. So far the Cubs have traded starters Scott Feldman and Matt Garza, and recently moved outfielder Alfonso Soriano back to his original nesting place in the Bronx. The Cubs made several moves in the offseason that may have seemed odd to some onlookers, but were in fact strategic signings that only now have come to fruition. Signing Feldman, Carlos Villanueva, Nate Schierholtz, and not trading Matt Garza during the most recent offseason were moves not designed to help the Cubs win more games in the 2013 season, but instead to dangle as trade bait in exchange for legitimate building blocks for the Cubs' future.

Now that we can see the exit for the 2013 trade deadline on the interstate highway that is the MLB season, the Cubs have gone from 4th to 5th gear, ready to move their presently unneeded veterans for prospects and cash. With Feldman, Garza, and now Soriano all wearing new uniforms, the next logical player to leave the north side of Chicago for different pastures is outfielder Nate Schierholtz. In an article from June, Fangraphs' Dave Cameron wrote about his penchant for Schierholtz and how numerous teams could benefit from his services.

"He's not any kind of star, but there's real value in a league average hitter who plays pretty decent defense, and unlike most other players traded in the next month, Schierholtz won't be a rental."

So far this season Schierholtz has played in 83 games for the Cubs, racking up 298 plate appearances and has been worth almost 2 wins (1.9 fWAR). At the plate, Schierholtz has put up a 131 wRC+, .300 TAv, and has hit a career high 13 home runs. Not surprisingly, the reason Schierholtz has coasted under the radar throughout his career thus far has been a lack of an opportunity. The last time he racked up this many plate appearances came in 2011 with the Giants, a season in which he was worth 1.3 fWAR and put up a modest 112 wRC+. The most captivating aspect of Schierholtz's hitting is his ability to crush right-handed pitching. He has barely hit at all in 2013 against lefties, but it almost bares little importance as his 141 wRC+ and .273 ISO against right-handed pitchers tells the story of Schierholtz at the plate. 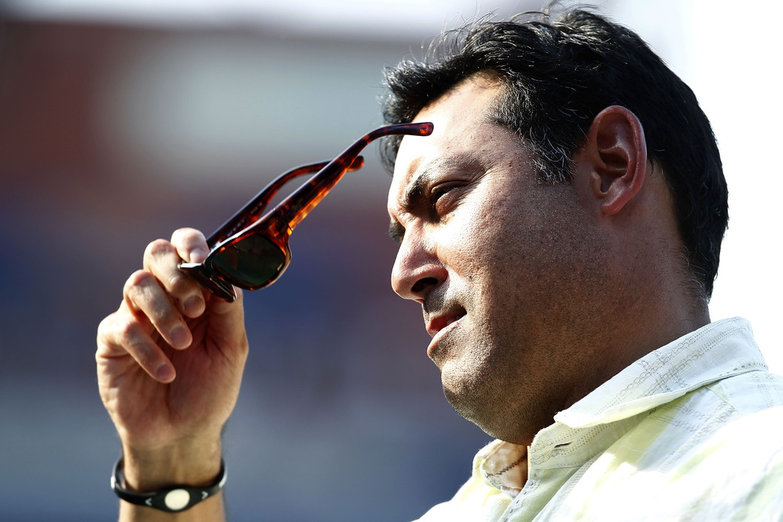 With GM's a main topic of focus, Andrew takes a look at a maybe buyer or maybe seller in Ruben Amaro Jr.

Defensively Schierholtz has never been a stellar defender according to the metrics available, but he is no statue in right field. Over the course of his career he has a positive FRAA (0.4), DRS (10), and UZR/150 (7.3). He flashes an above average arm, and has decent speed, giving him range with his legs and the threat of a fielder able to throw out a base runner attempting to move up. Speaking of speed, Schierholtz also runs the bases well. So far in 2013 he's posted a 0.3 UBR, but in the past he's outdone those figures, posting UBRs in the 1-3 range. Essentially, while Schierholtz is no speed demon, he won't lose his team value on the bases by making stupid plays or not taking extra bases.

Cameron went on to mention another fascinating aspect to Schierholtz:

"While he only signed a one year deal with the Cubs, he's going to fall shy of the six years of service time needed to qualify as a free agent, so any team acquiring Schierholtz from Chicago will control his rights through next year as well. Certainly, his strong performance this year will earn him a raise in arbitration, but his modest career numbers and the fact that he's been strictly platooned will keep his earnings down, as he won't have gaudy counting stats and won't be able to argue that he's comparable to everyday players."

Essentially, this flexibility allows for more suitors, in that a team that desires Schierholtz's services does not have to be a contender in 2013. A team that has 2014 playoff aspirations, and could use an upgrade in the outfield, especially when it comes to hitting right-handed pitching, might look to add Schierholtz knowing he will remain under contract at a fairly affordable price for 2014. Take the 2012 Pirates as an example of a team that may have dreamt of making the playoffs, but made moves at the deadline both to further that dream as well as put them in a better position to win the following season.

So, which teams could use Schierholtz the most, and more importantly, which teams should seriously consider making a move for the outfielder. In Cameron's piece written in June the two teams that he mentioned were the Pirates and the Royals, but he also thought that those would not constitute the only teams with something to gain by acquiring Schierholtz from the Cubs. Schierholtz main strength is his ability to mash right-handed pitching while remaining serviceable as a defensive outfielder. Looking through the list of teams' outfielders versus right-handed pitching, and most of the possible contenders have faired well. The A's, Yankees, Braves, and Rangers could all use upgrades in this area, but the Rangers seem set riding David Murphy and Leonys Martin vs. RHP, the Yankees recently traded for a different Cubs outfielder, the Braves need help in all areas involving pitching, and the A's have a full outfield that includes left-handed batter Josh Reddick who has somehow hit better this season against LHP.

Apart from these teams, the only fringe members of the "need Nate Schierholtz club" include the Pirates, Nationals, and Indians and Tigers. The Pirates have Garrett Jones as a platoon left-handed hitter, and adding Schierholtz would only bolster their outfield defensively when facing right-handed pitchers, as Schierholtz constitutes a huge upgrade over Jones. The Tigers have seem content to go along with Andy Dirks and Don Kelly as their left-handed outfield options and would rather add a bullpen pitcher. The Nationals would make some sense but all three of their starting outfielders fair well against right-handed pitching, with only their bench players causing their overall average to fell out of the top third of teams. The Indians have plenty of outfielders, and more importantly need assistance in the pitching department in order to make a serious playoff push against the division leading Tigers.

Now that we've knocked off teams that could utilize Schierholtz predominantly for this season, what about looking towards 2014. While perusing current team roster's as well as the list of 2014 free agents, two teams stuck out as possibilities for Schierholtz's services. First the Texas Rangers makes some sense. The Rangers recently made a deal with the Cubs, so this might be pure folly on my part, but with David Murphy and Nelson Cruz set to become free agents at season's end, the Rangers may be in the market for some outfield help. Adding Schierholtz would provide the club with a fairly cheap, non-committal, left-handed option to the lineup. Despite the recent move for Garza that flushed some prospects out of the Rangers' system, their Minor League roster's remain bountiful, and striking a deal would most leave both sides fulfilled.

The other team that might make sense is the Arizona Diamondbacks. The D-Backs have a number of outfield options, but Jason Kubel, their primary left-handed outfield platoon player has a team option for 2014 with a minimal buyout of $1 million. Kubel, when healthy has been dreadful at the plate this season, not performing well against lefties or righties. With left-handed pitcher hitting machine Cody Ross under contract for a year or two more, the Diamondbacks might like a platoon counterpart for cheap to go along with Ross. The Diamondbacks have a fairly stocked farm system that could easily get the job done in a deal for Schierholtz, and Diamondbacks GM Kevin Towers knows Theo Epstein well from the time Epstein spent with the Padres where Towers spent much of his MLB front office career.

Nate Schierholtz looks like the next Cub to have a different home, but the possibility remains that the Cubs could hold onto Schierholtz and trade him in the offseason, but he carries greater value for any team right now. Schierholtz has a number of quality baseball traits that he has shown off quite well so far this season, and no one can say for certain that he won't be moved before the deadline, he should be next in line.

Thanks to Fangraphs, Baseball-Reference, Baseball Prospectus, and MLBTradeRumors.com for information and statistics used in this piece.