A pair of Boston lefties have found great success against opposing hitters with their changeups.

Share All sharing options for: Felix Doubront and Jon Lester embrace the changeup

After being bounced from the team’s starting rotation following a rough April, Felix Doubront’s days with the Red Sox looked, if not numbered, tenuous at best. The left-hander had come into the season with high hopes, as many observers pointed to Doubront’s 23.6% strikeout rate during his rookie campaign as a sign for cautious optimism. But despite such promise, Doubront’s April (in which he failed to finish the seventh inning even once after doing so only three times in 29 starts in 2012) showcased the many reasons to be worried about the Venezuelan’s long-term prospects.

Nevertheless, since returning to Boston’s rotation on May 16, Doubront has pitched with the consistency of a steady veteran. Since that start in May, Doubront has allowed three earned runs or less in all 12 of his starts, holding opponents to a .645 OPS against during that span. For the season, the lefty’s FIP now stands at 3.50, which is a far cry from the inconsistent, unpredictable pitcher he appeared to be back in April.

A closer glance at Doubront’s numbers reveals something slightly unusual: The southpaw has posted a reverse platoon split this season, holding righties to a .235/.321/.369 line, which is noticeably better than the .277/.344/.391 mark he has against lefties.

There could be many reasons for these numbers, but the one that stands out the most is the development of Doubront’s changeup in his second big-league season. The 25-year-old is throwing his changeup 16.2% of the time in 2013 (nearly 2% more than last year), and 17.7% of the time against right-handed hitters, which ranks as the second-most frequent offering behind his fastball.

The success Doubront has had with his changeup is even more noticeable, as the pitch has produced the highest whiff percentage (14.9%) and whiff/swing percentage (27.5%) of his five different offerings, according to Brooks Baseball. Against righties, the changeup’s effectiveness has been even more apparent, with right-handed opponents posting a .264 slugging percentage and .060 ISO against the pitch.

For Doubront, the changeup has been made even more effective due to its similarity in location and movement to his fastball. As the zone chart below shows, he keeps the offering down in the zone, and most often away, to right-handed hitters, much like the way in which he attacks these same batters with his fastball. 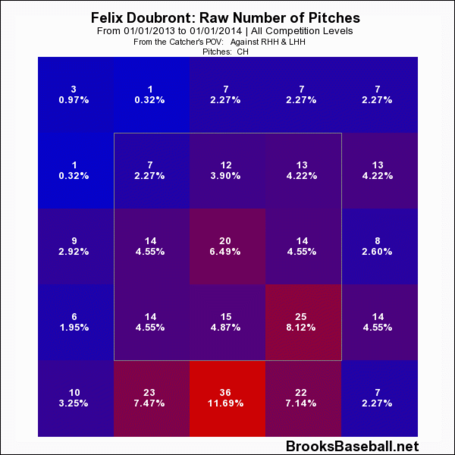 This approach has led to a bunch of flailing swings and opponents who are well ahead of Doubront’s offspeed offering, which, on average, comes in just under eight miles per hour slower than the left-hander’s fastball. In the video below, during a July 10th start against the Seattle Mariners, Doubront picks up two of his five strikeouts (including the first) on changeups to righties on the outer part of the zone. His fifth strikeout comes on a 90-mph fastball in which Seattle’s Nick Franklin is way late on the pitch, as if he is having trouble picking up just what exactly is coming out of Doubront’s hand.

Doubront’s success with his changeup mirrors that of another Boston left-hander, Jon Lester, who has shown a remarkable increase in changeup usage dating back to his big-league debut in 2007. During his rookie season, Lester threw the pitch only 4.7% of the time, a number that increased to 11.4% in 2010 and now sits at 13.7% in 2013. Like his fellow rotation-mate, Lester has also demonstrated a reverse platoon split this year, holding righties to a .724 OPS and lefties to an .861 OPS.

Though the results for Lester have been subpar again this season, his changeup has been highly effective, with the offering yielding a .188 batting average against and .094 ISO in 2013.

It would be hard to say that this emphasis on changeups between Boston’s two left-handed starters is a direct result of the organization’s new coaching staff, led, of course, by manager John Farrell and pitching coach Juan Nieves. Nevertheless, the changeup has clearly been an effective weapon for both Doubront and Lester this season, though the two starters stand at different points on their career path.

This reality only demonstrates how tricky an offering the changeup can be, often dependent more on feel and deception than anything else. Doubront was able to develop and fine-tune the pitch very early in his career, while for Lester, such success only came after many years in the majors, as he likely toyed with and perfected the offering between starts before he truly began to rely on the pitch in game situations.

Either way, both pitchers have put the changeup to good use in 2013, and in the case of Doubront especially, the Red Sox are reaping the benefits.