The Red Sox have reportedly agreed to an extension with franchise second baseman Dustin Pedroia. While the timing of this deal is perplexing for both sides, it is quite possible that the Red Sox have stabilized the future of their franchise by extending the face.

In recent history, extensions have been a key cog in the machine for organizations as they grow and develop. It is commonly accepted that extensions help franchises save money over the alternative that is free agency. More specifically, teams tend to extend young players with bright futures to low-cost deals in order to create more flexibility in constructing their rosters. However, with recent deals such as extensions to Matt Cain, Evan Longoria, Felix Hernandez, and Justin Verlander--and, if you fancy going back later, Joe Mauer--teams are valuing the cores of their franchises very highly, and they are making big commitments to them.

The Face of the Franchise

The Dustin Pedroia extension falls in line with those deals, yet it is quite different. First off, it's a heck of a lot smaller than other deals. Here is a table with some notable recent extensions for players that I classify as "franchise faces":

Now, the term "franchise face" is subjective and is up for argument, but at the time of signing, these players were among the best on their respective teams. One could argue a Miguel Cabrera for the Tigers or Clayton Kershaw for the Dodgers, but those aren't the players we see marketed on national television and in advertisements. We see Mauer, Kemp, and Verlander on a near daily basis. There are common traits for these players: they are highly established, they are amazingly talented, and they tend to be in their primes at the time of agreeing to extension. 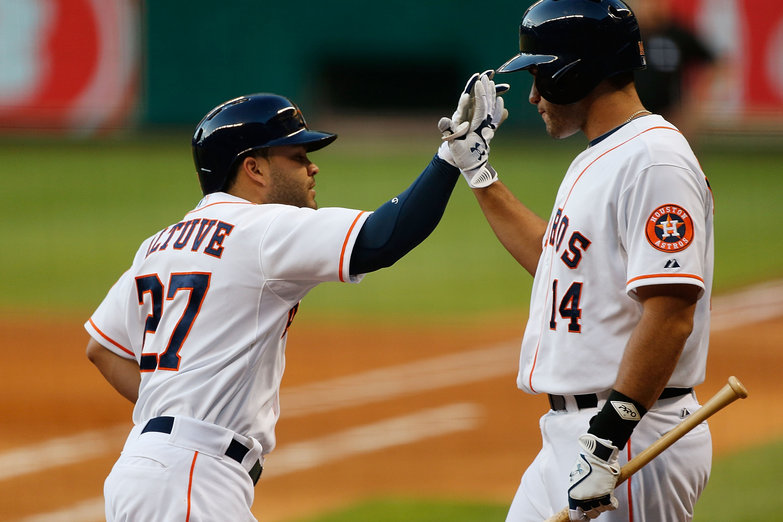 The Astros extended their franchise player in a much different way than other teams.

There is also one trend within these extensions that appears to fight against common philosophies in sabermetrics: these extensions don't start until guys are getting ready to exit their primes, and most of the years occur post-prime. Another rather concerning trend is that the AAV (average annual value) of these contracts is nearly 21 million dollars.

That being said, there is a key difference between franchise players and other talented players: marketability. It is a fact that players are not just paid for on-field performance, and that is evident within these extensions. These extensions serve as more than a commitment from an owner to a player. They serve as commitments from the owners to the team and fan base as well.

Dustin Pedroia's "franchise extension" carries a bit of interesting twists. Firstly, he'll be 31 at the beginning of the contract. Secondly, Dustin Pedroia was not set to hit the free agent market until after the 2015 season. These two facts lead me to question why the Red Sox would approach Pedroia with an extension now. When seeking answers, look no further than his counterpart on Boston's biggest rival: Robinson Cano. If and when Cano hits the free agent market this winter, he will be one of the single biggest prizes in recent free agent history, so it's easy to guess that the Red Sox wanted the deal done before Cano's new deal could become a factor.

With that in mind, the Red Sox also are taking on a lot of risk in the deal. First, here is the breakdown courtesy of MLB Trade Rumors:

The deal will occur between the ages of 31 and 37 for Pedroia, and the first year of the deal is essentially just turning his 2015 team option into a guaranteed year. In essence, this deal adds six years of control to one of the best individual players in the game.

Dustin Pedroia's profile as a player is a sabermetrician's dream. He draws tons of walks, doesn't strike out, hits for power, runs the bases with great intelligence, and is a master in the field. These skills have all held pretty steady over the past several years as well:

It's nearly impossible to not fall in love with this kind of player profile, especially from a second baseman. While he may not have anything that sticks out as remarkable--other than his plate discipline--he does everything well. However, that doesn't mean that Pedroia comes without concern. The dip in ISO in 2013 is not ideal, but it isn't necessarily concerning, either. After all, a 5.9% HR/FB ratio with half of his games at Fenway sits at its lowest point since his rookie season.

At the same time, Pedroia does everything so well that he's still on pace for 5.5 fWAR and 7.29 rWAR. No matter which you prefer, he's on pace to be in the same breath as Robinson Cano when people ask, "Who is the best second baseman in baseball?" With this in mind, we have to consider how Pedroia will age.

A while ago, Bill Petti took a look at how players age in plate discipline. What he found was that most plate discipline metrics are incredibly stable over time. What this means is that the bulk of Pedroia's plate discipline numbers should be stable as he ages. There was one exception within Bill's study, however, and that is O-Contact%. Bill found that O-Contact% decreases significantly--nearly 5% between ages 21 and 40--over time.

Unfortunately for Dustin Pedroia, this is one of his greatest skills as a player. Of players with at least 1500 PA over the stretch between 2009 and the present day, Pedroia ranks 8th in the majors in O-Contact% at 82.8%. The skill has already begun to decrease for Pedroia as well: 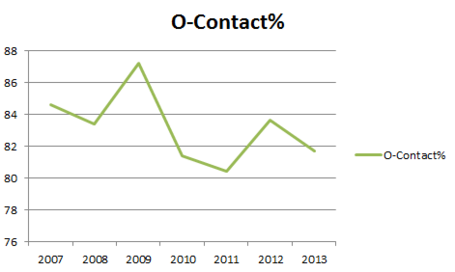 Over the last few years, it appears that Pedroia's ability to hit the ball outside of the zone has stabilized in the neighborhood of 82% of the time. As for what this means for Pedroia, it hints to an increased strikeout rate in the future with fewer balls put into play. If the study is correct and O-Swing% is one of the skills that remains stable over time, then a decrease in contact on those balls means a higher SwStr%. This will decrease Pedroia's ability to utilize his fantastic hit tool.

As far as Pedroia's total value, it's important to go back to Jeff Zimmerman's player age curve study. Rather than focus on Pedroia as an offensive player, let's look at a very important factor in his value: his defense. According to the study, fielding ability peaks around age 26 and declines rather steadily from that point forward. When this extension begins, Pedroia will be 31--at this point, players are generally two runs worse defensively than they were at their primes. By the end of the deal, Pedroia will be 37 and roughly six runs worse than at his peak if he ages like a typical fielder.

In terms of batting runs, the typical player is ten runs worse than his prime at age 31, and he is roughly 28 runs worse than his prime at age 37. If Pedroia follows a typical aging process--and there isn't a ton of difference in how different players age according to Jeff's curves--he will lose about 3.5 wins from his value between fielding and defense between his age 27 and 37 seasons.

In his age 27 season, Pedroia was a 7.6 fWAR and 7.9 rWAR player. For the sake of simplicity, we'll split the difference and call it a 7.75 win season. If Pedroia loses value at the typical aging pace, he will be a 4.25 win player in the last year of the contract. However, this might not be a fair valuation of Pedroia. After all, his best season is a full 1.1 fWAR better than his second best season, and he is on pace for 5.5 fWAR this year--as mentioned earlier. Therfore, let's break things down from 2013 going forward.

Between the ages of 29 and 37, players will see a loss of roughly 27 batting runs and four fielding runs, so the decline from here on out would be roughly three wins. This makes Pedroia a 2.75 fWAR player at 37 rather than 4.25, which seems just a bit more realistic.

At the current exchange rate of five million dollars per win, Pedroia would be worth 13.75 million dollars in his age 37 season if he follows the aforementioned age curve, and his contract AAV just so happens to be 14 million dollars. While the no-trade clause appears to be a big deal, Pedroia would have received ten-and-five no-trade rights shortly after the deal began, so it is a pretty meaningless addition to the deal as it only covers a couple years.

This contract serves as a symbol for the Boston Red Sox. Along with signing their franchise player, they are making their first major post-Theo commitment. The Ben Cherington era in Boston may have started when Theo Epstein left, but it will likely be defined by this contract extension. Ultimately it's hard to see where anyone can be faulted within this contract. While Dustin Pedroia could possibly have left a lot of money on the table, he guaranteed himself 100 million dollars more than he had before. While this contract has odd timing and the Red Sox took on a great deal of risk, the deal has the potential to change how organizations extend their franchise players. It also essentially makes Pedroia a member of the Red Sox for life.

Big thanks to FanGraphs, Baseball Reference, and MLB Trade Rumors for the data and information that went into the piece.

Ken Woolums is a writer for Beyond the Box Score and Off Topic. You can follow him on twitter @Wooly9109.