The aging, yet productive right fielder has his eyes on a few more seasons. What can we expect, and will it resemble the more recent past, or the days of yore?

From the time the 2013 season began, until the day the Mets officially called up Zack Wheeler to the big leagues, Wheeler's name produced a significant amount of speculation given the pitcher's elite prospect status. Since his callup, Wheeler has performed well, and fellow young phenom pitcher Matt Harvey has taken some of the weight off of the back of Wheeler -- especially given the colossal New York market in which the team hurlers play.

When the Mets officially called up Wheeler, many began to revisit the trade that brought Zack Wheeler to the Mets organization. On July 28th, 2011, the Mets traded outfielder Carlos Beltran to the San Francisco Giants for Zack Wheeler. It's almost two years later, and Beltran wears neither a Mets nor a Giants jersey. Beltran, now a St. Louis Cardinal, has occupied right field for the Redbirds since signing with the team in the offseason between the 2011 and 2012 seasons.

Since joining the Cardinals, Beltran has performed quite well. He signed a moderate but fair (like most recent contracts given out by the Cardinals franchise) contract with the Cardinals at two years, $26 million. That contract is set to expire at the end of the 2013 season. Unlike 2011, this July Beltran has few worries about trades on his mind -- he's firmly entrenched in the St. Louis outfield for the duration of the season. The 2013 version of Carlos Beltran has been hitting the cover off the ball, posting a 146 wRC+ in 84 games, 19 home runs, and a .224 ISO. From a value standpoint, Beltran has almost earned his annual salary in 2013, and he's done so while changing his strategy at the plate.

Beltran posted a career BB% of 10.5%, but thus far this season he's posted only a 5.1% BB%. Accompanying this attrition in free passes is Beltran's K%, which has dropped from last season, although it remains just above his career average. Beltran looks to be taking more first pitch strikes, but swinging at about the same percentage of pitches as in the past. Some decrease in bat speed might lead Beltran to be a bit more selective, which leads him to some worse hitter's counts, and thus a lower walk rate. Still, his overall hitting number are great, and he's doing it all at age 36. 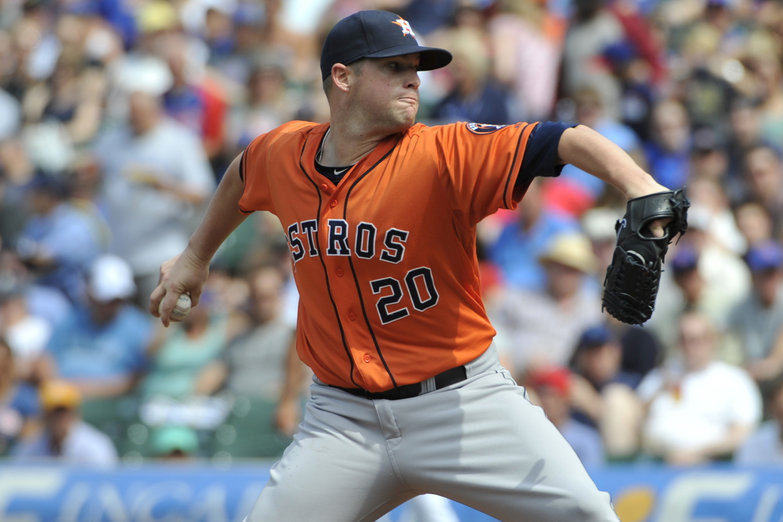 Trades are the talk of the business right now, so Mike takes a look at a probable deadline candidate from Houston.

Beltran has more recently become an interesting figure in that his career, more specifically the future of his career, has become a topic of interest. Beltran's contract with the Cardinals runs out at the end of this season, but with his recent and past successes, Beltran could become a quite valuable 36-year-old free agent this coming offseason. Beltran's fWAR/game over the last four and a half seasons has been lower than his career fWAR/game (.025 compared to .032), but given his age and availability this offseason, a year or two of Beltran -- even at age-37 and age-38 -- might prove quite fruitful.

This potential prospect recently gained more momentum when Beltran made public his desire and hope to play for about three more seasons.

"I would say three more years, just to say a number," Beltran told the Post-Dispatch. "This is my 15th [season]. If I could do [three more], that would be a good career for me."

The topic of his future in the league came about more in reference to his possible Hall of Fame status, but it also proves intriguing as far as player movement goes. The Cardinals currently stand in a place of power and leverage. The team currently has left fielder Matt Holiday under contract until at the very least 2016, center fielder Jon Jay is a cheap and solid option in the outfield until he becomes a free agent in 2017, and one of the top prospects in the minors, Oscar Taveras, waits for his chance to shine in the majors, leaving little room for Beltran.

None of this is to say that Beltran won't return to the Cardinals, but for the most part, the Cardinals do a very nice job of finding the best deal at the best value, and Beltran's future may lie elsewhere. Carlos has some leverage as well given his recent production, but he's not getting any younger, and the best place for him might be an AL team that could play him at both outfield and designated hitter. He's hit quite well for his age the last two seasons, he switch hits, and despite a career full of injuries, Beltran has remained quite healthy since 2010. Overall, he might not constitute the most appealing of choices as a free agent outfielder, but MLB Trade Rumors currently has him ranked seventh among all potential free agents this coming offseason.

Last season Beltran out-produced his salary, and he's on pace to do the same in 2013, a sign that the key to any free agent deal with the outfielder must focus more on the years involved than the AAV. Not knowing what Beltran might seek given his age, injury history, potential suitors, and recent production, we can only speculate as to a contract he might sign this offseason. Nonetheless, Beltran, were he to play for three more seasons would end his career at the age of 39, having played 19 seasons in the big leagues, which is in itself an accomplishment. If Beltran continues to average about the same number of wins above replacement for three more seasons, he'll finish within the top 30 of MLB outfielders in fWAR all-time. In addition, if Carlos and his agent can receive at least $10 million per season over those three years, Beltran could end his career having made just over $200 million

Whether Carlos Beltran ends up in the Hall of Fame, or becomes another player with HOF credentials to never make it in, cannot take away his great career, which has thus far been filled with great hitting, fielding, and base running numbers, longevity despite injuries, and even some postseason flare. Beltran looks to be a possible steal or overpay for this coming free agency period, but given his lack of a World Series ring, you can bet Beltran will look for a winning franchise that will pay him a higher AAV in exchange for multiple years given his age. Sometimes greatness comes when we aren't looking, and no matter how we look at Carlos Beltran, he seems to exude greatness.

Thanks to Fangraphs, Baseball-Reference, and Baseball Prospectus for statistics and information used in this piece.

Ben Horrow is a writer for Beyond the Box Score, That Ball's Outta Here, and Summerpastime.