Taking a look at potential MVP candidates for the American League.

Share All sharing options for: American League Most Valuable Player: The Great Debate

As the first half of the season winds down, it's time to reflect on some of the great performances, and in turn look at some of the potential most valuable player candidates. The general consensus is that Miguel Cabrera, Mike Trout, and Chris Davis make up the top three AL MVP candidates. Those three players are having nice seasons and all, but two of them don't appear in my top three.

A common debate among fans is that so and so should be most valuable player, because if you took that player off of the team that team would not be where they are. That's a fairly weak argument, however, because in my opinion that can work for the first 10 or even 15 guys among the WAR leaderboards. Because of that, I will only consider individual performance.

Coming in at number three when it comes to my MVP ballot is a young third baseman by the name of Manny Machado. This might surprise you, but in all honestly, it really shouldn't. Machado is off to a heck a year, and he's only 20 years old! As of July 1st, Machado has a .321/.350/.489 triple slash line. 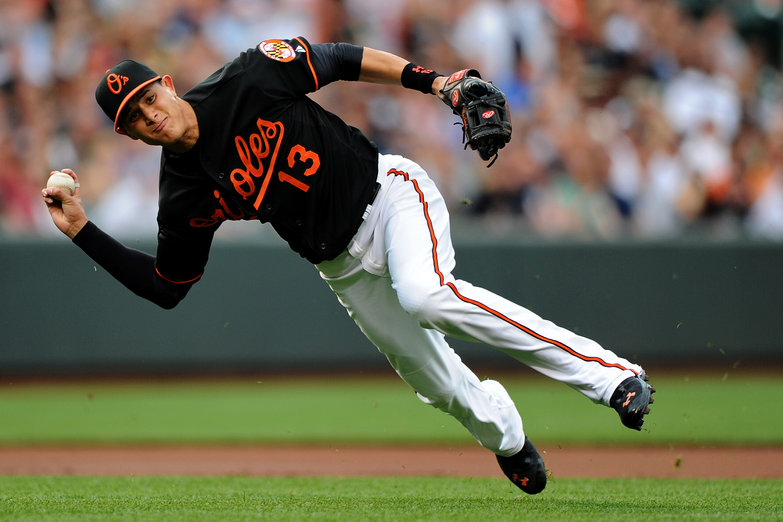 Now I know batting average isn't exactly the best statistic out there, but this does a nice job of giving a quick grasp of how he's doing so far. He's not hitting for a ton of power in the traditional sense (home runs), but he does have an above average ISO, and he's hitting doubles like crazy, not like that should determine if he's MVP or not though.

Machado's done an excellent job at providing offensive production, while also flashing gold glove caliber defense at the hot corner. His 127 wRC+ might not strike you as MVP caliber, but take a minute and realize that he's only a 20 year old. Since 1970 only 4 other 20 year olds have posted a higher wRC+ than he has. They are Ken Griffey Jr. (131), Jason Heyward (134), Alex Rodriguez (161), and Mike Trout (166).

I know RE24 is a statistic that has gained a lot of popularity around Beyond the Box Score, and Machado only ranks 19th in the American League with a 12.45 mark, but after talking with a colleague on Twitter, I've become less of a fan of the metric. It still measures players contextually, and when we want to compare players with each other we want to eliminate any type of context. In short, RE24 relies on events that your teammates took place in. That's for another day though...

Now it's time to look at defense. I know UZR has its flaws, I really do. That doesn't take away from the fact that Machado has had one hell of a season on defense. He currently has a 15 UZR and 27 UZR/150, and while he's highly unlikely to maintain that in the second half it's not unreasonable to think that he could have an 8 UZR during the second half of the season.

He's been slightly hurt on the base paths, but other than that Machado has been fantastic in nearly every aspect of the game, coming in with 4.2 fWAR.

At second is a left fielder/center fielder for the Los Angeles Angels by the name of Mike Trout. 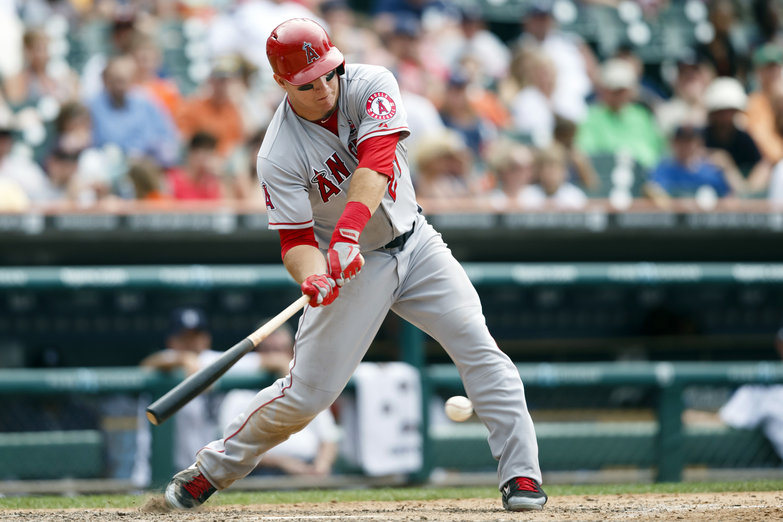 Trout is generally first or second when it comes to the MVP race, and it's definitely deserved. When Trout didn't win MVP last season a ton of people were up in arms, and rightly so, because Trout was phenomenal. While Trout hasn't been as good (and really, that's no knock because he had 10 fWAR last season), he's still had a fantastic season to date.

People were worried when Trout came into spring training, because he came into camp with an extra 20 pounds. Turns out there was no cause for concern, because Trout's .315/..392/.545 line is nearly as good as last season. His 159 wRC+ would be tied for the second best of all-time for a 21 year old since 1970, only behind Cesar Cedeno's 163 mark. 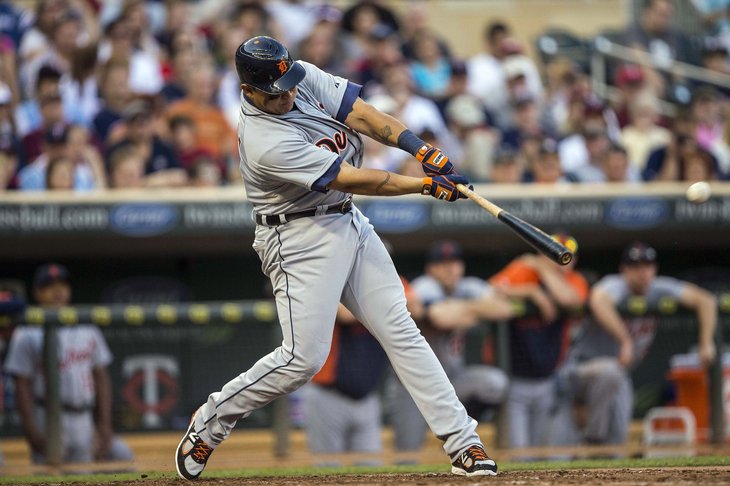 Ben looks at which players add the most value to their team.

Trout also improved his plate discipline from a year ago, specifically in the strikeout department. Last season Trout struck out 21% of the time, while this season he's currently striking out only 16% of the time. He's also walked more, but only a modest one percent more. The decrease in strikeouts can be linked to increase in contact inside the zone, as well as an overall increase in his contact percentage.

Last season Trout got over a win from his defense, posting a 13 UZR, while this season he only has a .4 UZR while playing left field, as well as center field. He's actually been better in left field this season, but that could be a case of small sample size, since he's played just under 300 innings there in 2013.

Trout wasn't number one on my MVP ballot, because currently, in my opinion, that belongs to Evan Longoria, third baseman for the Tampa Bay Rays. 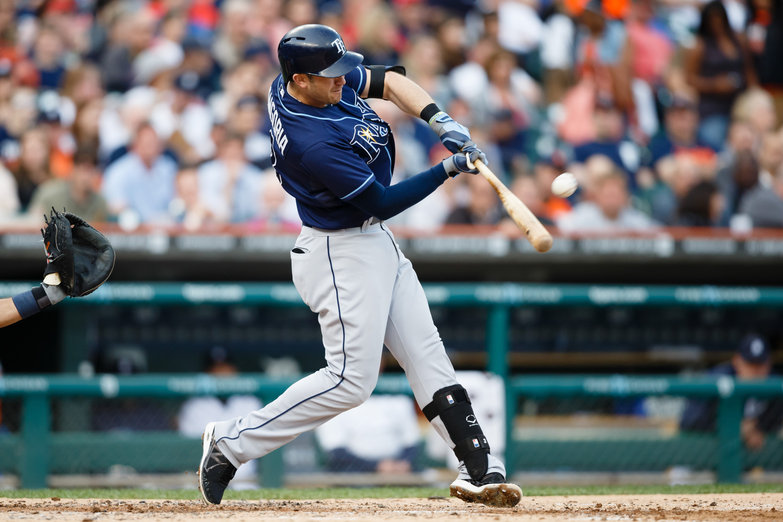 I know, I know you're probably thinking that I'm insane because I didn't include Miguel Cabrera or Chris Davis in my top three, but Longoria has been really good in 2013. Longoria flies under the radar, and playing for the Rays probably doesn't help, but that doesn't dismiss the fact that he's an extremely talented baseball player.

Longoria suffered from a hamstring injury last season, and only played in 74 games, but this season he looks like the Longoria we all love. He's currently sporting a .298/.367/.550 line, and his 152 wRC+ isn't far from Mike Trout's. Evan is an all around talent in every sense of the word. He can hit for power, and this year is no exception based on his .252 ISO this season.

In terms of his aforementioned 152 wRC+, this would be the greatest offensive season of his career, and if he keeps up his current pace it would be his best season in terms of overall wins above replacement.

Longoria has always been one of the best defensive players in the game, and this season is no exception. He's currently saved 10 runs with his glove, and while unlikely, it's not unreasonable to think that he could finish the season with a 15-20 UZR. His UZR/150 is also right behind Manny Machado, and going forward it should go right down to the wire to see who's the better of the two. It does take more than one season before we can get any worthwhile data from UZR in terms of true talent, but we do know Longoria is one of the best defensive players in the game.

On the base paths he's been slightly below average, but with the combination of his offensive production, and his top tier defense it isn't that outrageous to consider him the MVP of the American League. Currently he has 4.5 fWAR.

Miguel Cabrera and Chris Davis have had phenomenal seasons, but in my opinion it isn't outrageous to compare players with a 1 WAR difference, or even a 1.5 WAR difference when it comes to the MVP award. In terms of Davis' WAR he only has .1-.4 more WAR than Machado and Longoria, a mark that is essentially negligible. There are tons of good choices for MVP, but when it comes down to it Evan Longoria has been my most valuable player.

*Just a quick note when it comes to UZR: I realize all of these guys will face some type of regression as the season goes on, whether it be positive or negative. We can also at least get an idea of the type of pace these guys are on, i.e. it isn't outrageous to think that Machado could finish with an added 7-8 UZR. Anyway, feel free to debate in the comments.