After compiling a 5.26 ERA over 375 innings pitched in his first two seasons in Boston, John Lackey looked to be irredeemable in the eyes of Red Sox fans. The right-hander, signed to a lucrative, five-year contract prior to the 2010 season, quickly became a punching bag for fan frustration, and following Tommy John surgery that sidelined him for all of 2012, many observers had all but given up on Lackey as a reliable starting pitcher moving forward.

But, as often happens in baseball, something surprising occurred in the first half of 2013: John Lackey became a good pitcher again. His numbers—2.78 ERA, 3.27 xFIP, 8.3 K/9 in 100.1 IP—corroborate this fact, as does his complete role reversal from untrustworthy villain to reliable performer in Boston.

If you have watched Lackey this year, perhaps you have noticed how many strikeouts he has piled up. The 34-year-old's 22.5 percent strikeout rate would represent the highest single-season mark of his career.

Furthermore, perhaps you have noticed just how Lackey has used his four-seam fastball, a pitch that, prior to Tommy John surgery, had been mediocre at best, but now represents one of the right-hander's most lethal offerings. In 2013, Lackey has generated his highest whiff percentage (8.9 percent) and whiff/swing percentage (20.7 percent) with his fastball in a single season since Brooks Baseball began compiling Pitch F/X data back in 2007. The pitch has become a weapon for Lackey and demonstrates just how aggressive he has been in attacking opposing hitters.

I could explain this trend in Lackey's fastball usage in words, though sometimes, visuals provide a better explanation: 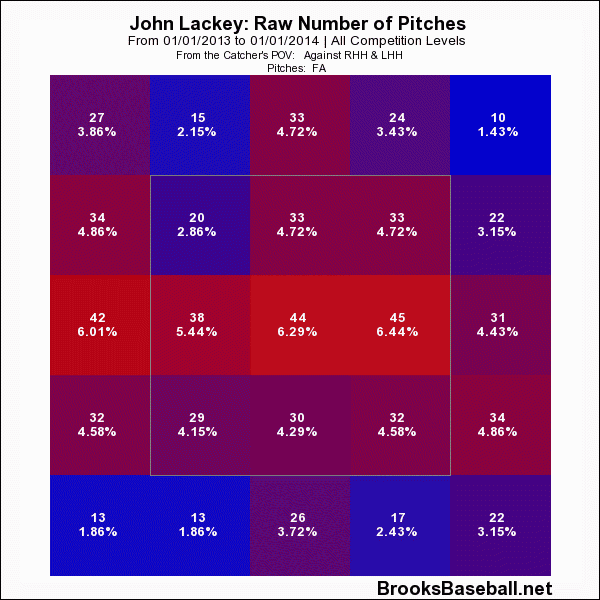 This zone chart shows where Lackey has located every one of his fastballs this season from the catcher's perspective. A surprising number are located in the middle and upper portions of the strike zone. Indeed, Lackey has been using elevated fastballs strategically, and often, they either lead to weak contact or swings and misses from an opposing batter.

Here is another chart that shows the amount of whiffs Lackey's fastball has produced in 2013 (red means more whiffs): 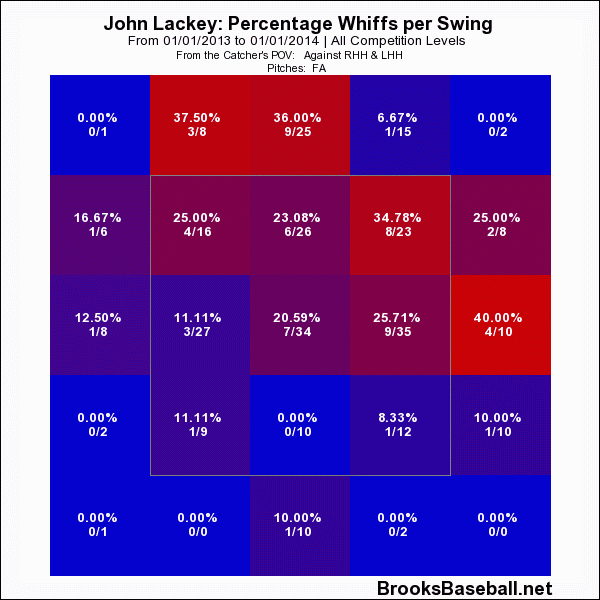 Again, there is that trend at the top of the strike zone.

To get a better sense of just how much Lackey is elevating his fastball compared to his other offerings, here is another chart that shows all the pitches Lackey threw in his last start before the All-Star Break against the Oakland A's: 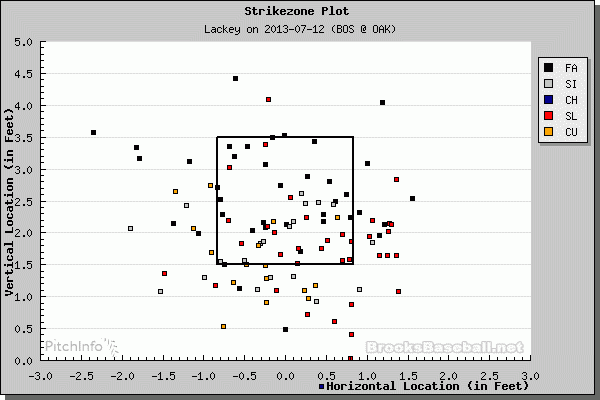 Sure, there are some sliders mixed in there, but the majority of Lackey's pitches located at or near the top of the strike zone are the black dots, which represent his four-seam fastball.

Finally, let's have a look at the Red Sox hurler's performance against the Colorado Rockies, in which he recorded 12 strikeouts over seven innings:

Eight of the right-hander's 12 strikeouts came on the fastball, with many of these being four-seamers in the upper levels of the strike zone.

The fact John Lackey has returned from Tommy John surgery with strong stuff shouldn't come as a huge shock. A number of pitchers have now bounced back from the operation, and considering Lackey sat out all of 2012 to rehab, the return of his previous fastball velocity isn't surprising.

The aggressive manner in which he is attacking hitters, however, is eye-opening. High fastballs aren't the only reason for his 2013 success (the devastating slider he has developed is another factor), but nevertheless, Lackey's ability to elevate his four-seam fastball and achieve positive results with the strategy is a large reason for his stellar performance so far this year.

All statistics courtesy of BaseballReference.com and FanGraphs.com unless otherwise noted.