Are Rookies Getting Better?

With the increased coverage of many great rookies, it almost seems that the rookies of today are better than in the past. But is that true?

Share All sharing options for: Are Rookies Getting Better?

Anyone getting tired of hearing that baseball is a young man's game? Well, you'll hear it again here. The onset of exciting players seems to have reiterated that. Just in the last two years, we've seen Mike Trout, Bryce Harper, Manny Machado, Matt Harvey, and Yasiel Puig light up the league with excitement. And what seems to be more astounding is that all these guys were all doing it as rookies, and all are still younger than me.

While not a rookie, Jose Altuve is another young player on the rise. Ken Woolums takes a thorough look at the Altuve's career and his recently-received extension.

Why does it seem that there is a new injection of youth into the majors? Surely there are reasons. Maybe teams are more impatient, rushing young potential stars to the MLB level. Of course, farm systems are a little less crazy than back in the day. As Jim Lefebvre—A former Rookie of the Year Award-winner who spent only 3 years in the minors—noted, "When I came up the Dodgers had 16 farm teams— 3 Triple-A teams..." Well, 8 teams is now a little closer to the norm, so maybe that allows the best to get up to the Majors faster.

So let's look at this, for both hitters and pitchers. The data for this was pulled from FanGraphs, and encompasses the years 1901 to 2012. Certain statistics, BABIP and K% for examples, are not available prior to 1913. Also, for pitchers, missing batted ball data takes xFIP and such statistics out of the equation for analysis. 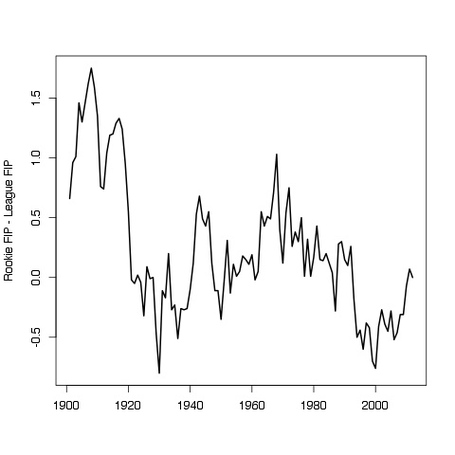 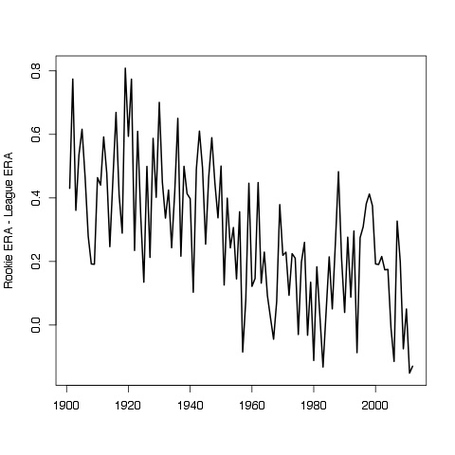 Maybe it's the influence of pitch/inning counts. Maybe it's because rookies are often called up midseason (Probably a big influence). But it's irrefutable that the average number of innings pitched for rookies has decreased by about 20 IP over the last 25 years. Note in the image below that the two low points of 1981 and 1994 are (of course) due to the player strikes in those years. 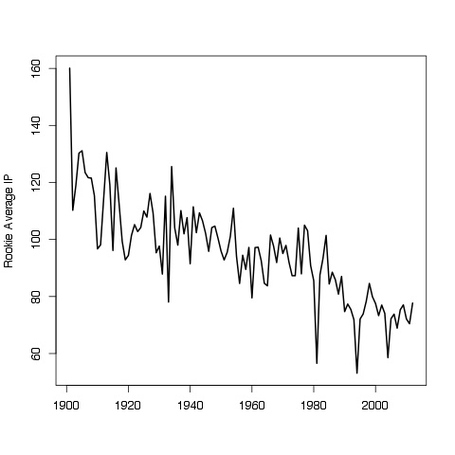 Really, rookie hitters haven't changed much over the years. Looking at batting average, OBP, SLG, ISO, wOBA, wRC+, and BB% haven't really changed much when compared to the league averages in each year. In general, on average rookie hitters are a little below average compared to the rest of the league, and this has been the same (When accounting for year-to-year variation) since the 20s.

The only place where things have changed a bit is in K%. In general, rookies are striking out more compared to the league average than in years past. Why this is, who knows? Without a doubt K% has been increasing recently, and of course rookies will not have seen better stuff than what they see in the majors. This probably explains a portion of it, but possibly not all of it. Theories are encouraged.

Where Does This Leave Us?

So, what are we left with? The average rookie really isn't that much different (When compared to the league averages) than 20, 40, or even 60 years ago. Also worth noting is that when looking at the upper quantiles of the data, it's not like the best rookies are systematically better than the past either.

So why does it seem that rookies are either getting better, or at least more coverage? I suppose that we could just blame it on the hype machine that is social media, and maybe it is that. But other than that, who knows. Feel free to offer your theory below.

Stephen Loftus is a writer for Beyond the Box Score.