Matt Garza appears the likely candidate to be 2013's "big-time starting pitcher on the move" in the yearly ritual of rebuilding teams cashing in on contender's lack of front-line pitching. How does he match up to the man who earned that title in 2012?

Matt Garza is on the verge of being moved somewhere. The Cubs are in total rebuild mode and he represents a prime trade chip. His performance as of late has been solid and he is clearly the #1 option available to teams looking to upgrade their rotation (unless Cliff Lee becomes more available).

While patrolling the wonderful repository of trade tidbits over at MLB Trade Rumors I came across a link to this article over at CSNChicago, and more specifically, this statement made by "a handful of Major League Executives":

"…Garza is not considered a No. 1 or 2 in a rotation, but is considered a very strong No. 3 and the price the Cubs front office is asking for is exceptionally high."

My perception of Garza was always that he represents a solid No. 2 starter and certainly better than just about every team’s #3 guy (Detroit’s Anibal Sanchez is potentially the only exception). As a trade chip, Garza is a high-performing pitcher with a couple durability concerns, but nothing major, and he has already bounced back this season after missing a few starts to post some solid first-half numbers.. He is on his last year of arbitration and will be a free-agent at the end of the 2013 season.

A fairly obvious comparison between Zack Greinke being dealt last year and the potential for Matt Garza to be dealt this year exists. The time frame being analyzed is the seven seasons leading up to their trade or potential trade. This is a lengthy track record and certainly enough to make a good determination of each guy’s talent level.

Both started their careers with an ERA in the high-5’s, took a big jump forward seven seasons ago and have slowly been chipping them down to the low-3’s ever since. At this point they are a near lock to have a sub-4 ERA every year they pitch. 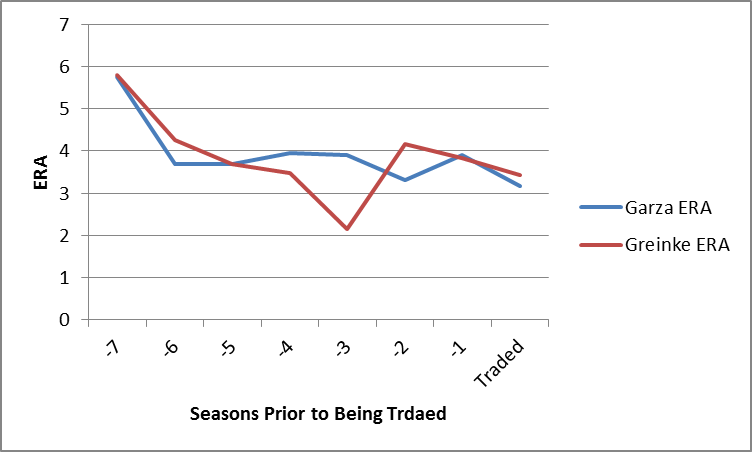 Though ERA’s is volatile and subject to some luck, it can generally be stated that Garza has been more consistent and Greinke has been more volatile. In fact, that volatility won him a Cy Young back in 2009 and most assuredly boosted his trade value (though likely had a larger impact on the deal to the Brewers than the Angels).

Taking a look at some numbers that filter out a little more of the noise is a good step to look at "true" performance levels. This is where Greinke starts to separate from Garza. Both have driven their peripheral statistics down over the years, but Greinke has done it at a greater clip. 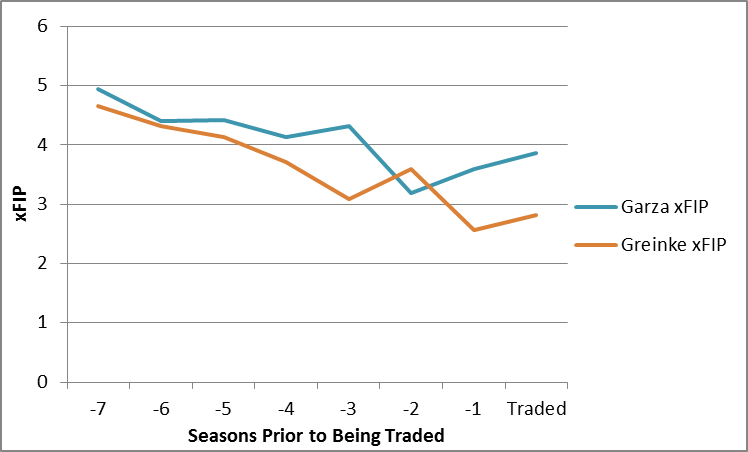 Using xFIP as a quick reference for performance isn't perfect, but it accurately quantifies a large part of what a pitcher can control and Greinke has been better at the those factors than Garza has over the past seven seasons.

Looking at the rate performances of these two pitchers, a pretty clear story is told: Zack Greinke is a slightly better pitcher than Matt Garza, though the two aren't in different stratospheres from each other if you look at them from a cold-hearted sabermetric view.

Though xFIP and ERA are good, they don’t give you a really great sense of how much these pitchers are helping their teams win ball games.

Pitchers can provide immensely different values with similar rate statistics, if they are used differently. Think back to C.C. Sabathia’s herculean effort for the Brewers. He was traded on July 7th, 2008 and Sabathia pitched 130 innings and won 11 games over the final 73 games of the season. Sabathia threw nearly 19.8% of the team’s total innings and amassed 4.3 fWAR during that time. Greinke, meanwhile, was traded to the Angels on July 28th, 2012 and pitched 89 1/3 innings, or 14.8% of his team’s total innings, while amassing only 1.2 fWAR.

Let’s take a look at the bottom-line and see how many extra wins these two pitchers are providing their teams so get a sense of what a potential buyer might be acquiring. 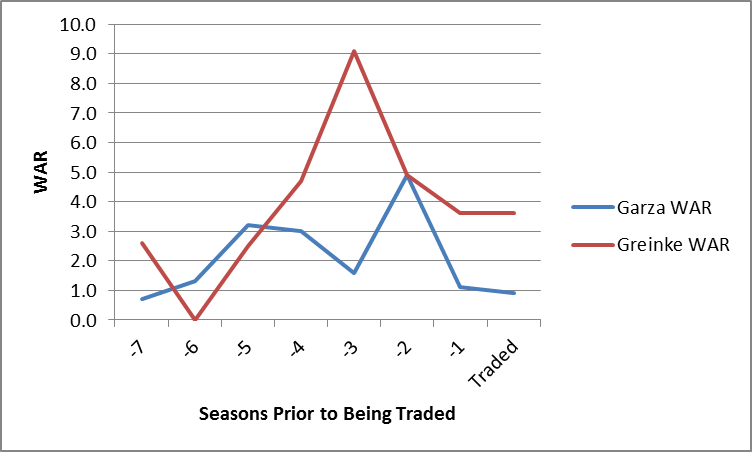 Clearly, Greinke is the runaway winner here. He has had a higher peak and he’s been as good as or better than Garza in the season leading up to his (eventual) trade. If you are a Garza-apologist, you may be saying: "Garza has had a few funky injuries and he hasn’t been able to amass the counting stats that Greinke has!"

To counter this point, I present to you their fWAR/9IP as a measure of how many wins they provide their team when they are on the field: 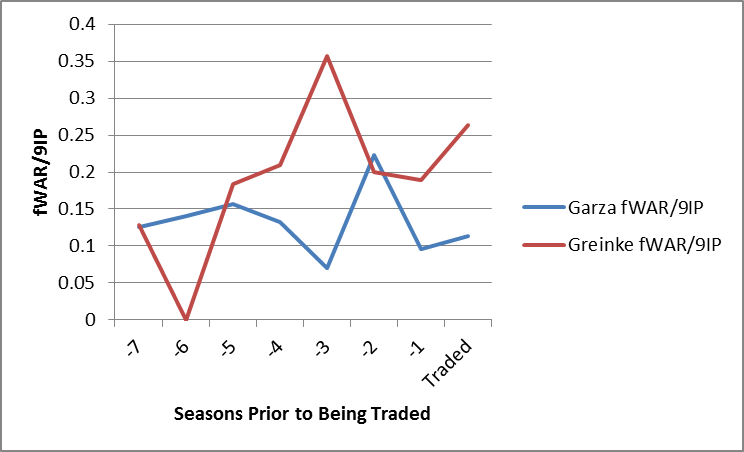 Greinke is better on a rate basis as well, and that has been the story for the five years leading up to a deal.

Though Greinke is no C.C. Sabathia (who is?), he is a durable guy himself. Over his career, he has been racking up more fWAR than Garza due almost entirely to the fact that he throws more innings and is slightly better in the innings he is out there.

When it’s all said and done, Garza just doesn't compare to Greinke. Greinke has been better over the years and more durable. The only thing working in Garza’s favor is that he is signed at $10.25M while Greinke was signed at $13.5M, representing around $1M in savings for the potential acquirer over the remainder of the respective seasons.

It will be interesting to see how it all plays out, but when prospects in the top-50 of various prospects lists are being thrown around, it seems a little rich for a guy who isn't as good or as durable. Greinke was traded, last year, for the #43 prospect in Baseball America’s 2012 prospect list and a pair of AA-pitchers.

Once more from Kaplan:

"A year ago, the Milwaukee Brewers traded Zack Greinke to the Angels and received three prospects including standout shortstop Jean Segura and two AA pitchers. Of the baseball personnel experts I spoke with, the consensus is the Cubs will probably not receive as much as the Brewers did but should come close."

I’m not sure if this scout looked at the career lines of these two pitchers, but they are very close, with Greinke coming out slightly ahead across the board. Maybe these folks who work in baseball know what they are talking about after all. In any event, some team will trade away a prospect, hoping that they didn't deal away the next Jean Segura, while hoping that they are bringing in the next C.C. Sabathia.