My picks for the "first half" AL and NL MVP.

Share All sharing options for: First Half MVP Awards

One of my favorite baseball activities is looking at leaderboards and determining who would be my MVP or Cy Young winner up to this point in the season. I do this all the time during the season, but since it's the All Star break, and since the All Star break is conventionally the "halfway" point, even though it's more than halfway, and since people like arguing about awards and value, I thought I'd take this opportunity to share my thoughts about the AL and NL MVP thus far.

I partially laid out my methodology for evaluating past performance for hitters a couple months ago, but I will recap it here.

The major difference in the way that I like to look at past performance in contrast to the various versions of WAR is that I consider context and timing. For hitters, this means that I use RE24 instead of wRAA. Some people are probably tired of hearing me talk about RE24, but until it's more widely understood and appreciated, I will continue to champion its cause.

For a great explanation of RE24, check out this post by Tom Tango on Fangraphs. 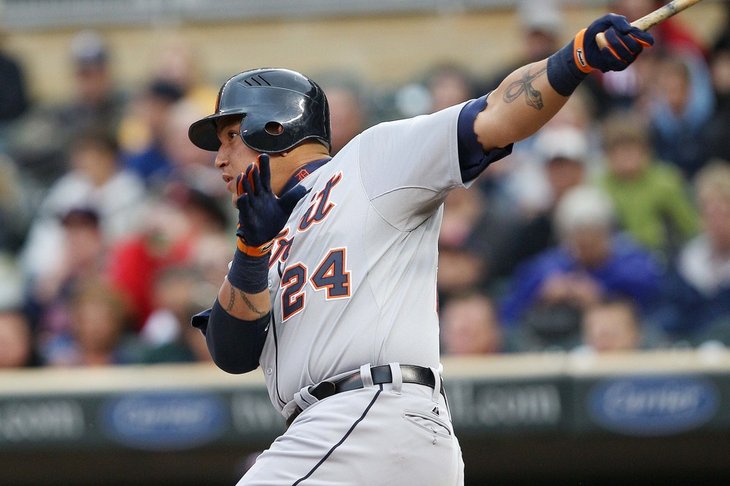 Check out my original methodology and reasons for using RE24 from a few months back.

To clarify, I absolutely do not believe that context-dependent statistics should be used to evaluate true talent or predict the future. However, for understanding how much a player contributed in the past, and for rewarding players for helping the team score runs, I believe that we are better off considering the context in which their hits, or lack thereof, came about.

Now RE24 is not without its faults. Players who come up in more men-on-base situations will have more opportunities to create runs; however, unlike statistics like the RBI, players are also rewarded for getting on base when no one is on, for creating runs rather than just driving them in.

The other issue with RE24 is that it rewards the batter for all extra base advancement that would otherwise be rewarded to the baserunner. Though I am currently working on solving this issue, for now, we will have to just ignore it, since the difference at this point in the season will be at most 4-5 runs. For close races, we can also look at the baserunning of the player(s) that usually bat ahead of the hitter in question as a tiebreaker.

Another adjustment I make to WAR is that I average the three major fielding metrics -- UZR, DRS, and FRAA -- so that we can somewhat account for the noise and variation inherent in these metrics individually. Keep in mind, this is not a perfect solution, nor is it necessarily the best one analytically, but it's a quick and easy way to get a good sense of a player's defense. Nevertheless, because these metrics are still noisy, I am not afraid to add some subjective judgment if the metrics don't align with intuition, and when in doubt, I will take the better hitter over the better fielder, all else being equal.

For everything else, I use the Fangraphs' WAR components: Replacement runs (Rep), Positional adjustment (Pos), and UBR (this is just the baserunning component of BsR, because RE24 includes stolen bases).

Finally, and this is a minor change, I prefer to measure value/contribution in runs, not wins. It's easier, in my opinion, to quantify what we're actually talking about, and it's more aesthetically pleasing, in my opinion, to compare 47 and 42 than 4.7 and 4.2.

(Yes, I used my initials in my version of WAR/RAR. Don't judge me.)

As you can see, Paul Goldschmidt is well ahead, and on first glance, it seems obvious that he would be the first-half winner by my methodology. However, two things make me hesistate: first, his fielding numbers are very high, high enough that I somewhat question their accuracy. Do I believe that he's a very good fielder? Of course. But 9.5 runs above average defensively for a first baseman after 94 games is extreme; I'd be more comfortable assuming a value closer to his UZR.

The second, more important, reason that I hesitate is the third name on that list: Yadier Molina. As you probably know, catcher defense is extremely difficult to measure, and Molina's defense, from all accounts, is elite. It's not just his arm, but his pitch framing, his game-calling, really any aspect of catcher defense you can think of. The question is, should we give him more than an extra 10 runs just for a perceived defensive value that can't be measured?

Yes, I believe we should. I'm not confident about this, and I believe that it's very close between Molina and Goldschmidt, but if I had to pick one, I would choose Molina.

What do you know, Miguel Cabrera and Mike Trout are the top two contenders. These two are insane, and it's absolutely crazy that Chris Davis, who is hitting over .300 with 37 home runs, is not in the top two.

While Cabrera is at the top of this list, I believe that Mike Trout takes the first-half crown. The reason comes from his defensive numbers. As you can see, somehow DRS, Baseball-Reference's defensive metric, says that Trout has been worth 11 runs below average in left field. That is absurd. Look, I'll admit to the possibility that he's only been average in left field, though my inclination is to say that he has been well above average. But -11 runs is too far outside the realm of possibility for me. In my opinion, it would be safe to say that Trout has been worth about 3-5 runs above average in left, which, given that he was worth 13 runs in center last year, is actually a fairly conservative estimate.

To get him to four runs above average defensively, we add about seven runs to his total, putting him about four runs ahead of Cabrera. That is well within the error range, so if I was being fair, I'd just call it a wash, and probably throw Davis in there too. But this is fun, not fair, so I have to choose one, and I'm choosing Trout. Is it crazy that I'm not choosing the player who is having one of the best offensive seasons of all time? Maybe. But if we're looking at actual contribution to the team, Trout's combination of great hitting, fielding, and baserunning, put him ahead.

What do you think? Is there something wrong with my methodology? Do you disagree with any of my choices? I'm honestly curious to hear your thoughts. Because what's more fun than arguing about the MVP?