David Laurila from FanGraphs conducts another excellent interview, this time with Red Sox catcher Jarrod Saltalamacchia. What do his insights suggest about the importance of pitch selection and sequencing?

Share All sharing options for: Jarrod Saltalamacchia and Calling Games

One of the main tenets of advanced statistics is assigning responsibility. More often than not, that is a fairly objective exercise. Home runs: good. Pitcher wins: not so good.

When the delineation of responsibility is not as clear, we rely on stats that do a better job of isolating what is in one player's control. With the way the game is structured, this is possible. There are no pick and rolls in baseball.

There is, however, one relationship which may not be quite as interactive as one between a point guard and center, but does require dependency on another player: the pitcher and catcher dynamic. We're inclined to say that the pitcher has much more responsibility, and that certainly seems correct. But reading David Laurila's interview with Jarrod Saltalamacchia might make you wonder just how much a catcher can help (or hurt) his pitcher's results.

Laurila rarely interjects himself, allowing Saltalamacchia to fully describe his cerebral thought process. Much of the interview is focused on studying and observing his opponents:

I go a lot off the hitter’s swing percentage. For instance, what does he do on 3-2 counts? If a guy is a 90 percent swinger on 3-2, I feel comfortable calling my pitcher’s second-best pitch, whether it‘s a slider, a changeup or whatever. If it’s something we can get the hitter to swing at — out of the zone — that’s better than giving in and throwing a fastball in the zone. You can go off a hitter’s tendencies.

And while Saltalamacchia clearly is a fan of data, he also realizes that the numbers can be aided or refuted by more qualitative observations:

When I was in , [Mike] Maddux would be, ‘Nick Swisher's hitting .130 on curveballs this year, so I’m like, ‘OK, curveballs.’ But Scott Feldman was on the mound for us, and when Scott threw his curveball, Swisher was crushing it. It was a different curveball than, for instance, Justin Verlander’s. That’s where I have to get on video and see what exactly he’s hitting. Or maybe someone has been hitting .200 on curveballs, but he’s been crushing them right at people.

All curveballs are not created equal, so there is no 'correct' answer just based off the data. He also reads how a hitter is swinging at or even taking certain pitches, and how that may help determine what pitch and location to call for next.

Of course, many pitchers have the mindset of wanting to stick to their strengths, over attacking hitters' weaknesses. So a catcher's knowledge of his staff is critical, and Saltalamacchia is not short on notes.

I don’t know if you can get late break on a breaking pitch, but you can get sharper break. Taz’s [Junichi Tazawa] curveball kind of tumbles in there, as opposed to Alex Wilson’s slider, which is sharper — he gets some good tilt. When Jonny Lester throws a good curveball, it’s got good tight spin and just kind of drops. It’s not late break so much as sharper break.

At risk of posting Laurila's entire interview here, just read it, if you haven't already- it's fantastic. It left me wondering if we can evaluate the impact catchers have with their pitch selection, an aspect that is notably unaccounted for. Results are typically attributed to either the pitcher (FIP or xFIP), or fielders (UZR, defensive WAR, etc.). Even catcher defense (pitch framing, stolen base prevention, blocking, etc.) has been quantified, but is different from selecting pitch type and location.

Let's say Saltalamacchia calls for a 3-2 slider, and it's out of the zone, but the batter swings and misses. Do we give Salty credit, because his thought process was sound, based on a batter's O-Swing percentage on full counts and contact rate against sliders? But what if the exact same slider was taken, and in spite of the thought process, the batter walks. That goes against a pitcher's FIP, but was it just a misguided request by the catcher?

Judging whether it was a 'good' call that didn't work or a 'bad' call that happened to work is fraught with subjectivity, and making me dizzy on Type I and Type II errors from chemistry class.

Read more on a potential Saltalamacchia extension at Over the Monster.


Obviously, the pitcher can shake off at any time. But these are nevertheless muddy waters. I suppose you can note how often a pitcher hits his catcher's target, and attempt to distinguish between a good plan and good execution, but that also doesn't speak to pitch type. And when a pitcher does hit the target, it's more reasonable to credit the pitcher's command first. 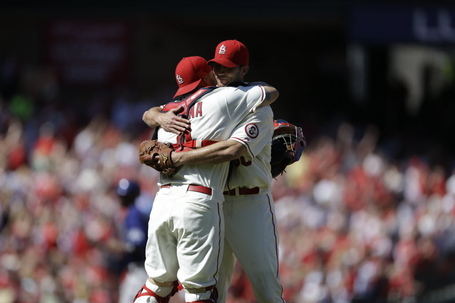 For all the advancements made on defensive metrics, I'm not smart enough to foresee how we'll eventually quantify methods like Saltalamacchia's, versus those of a by-the-book catcher, which employs putting one finger down in fastball counts and going off-speed with two strikes. Or which is even the better approach- maybe the conventional catcher has studied just as much as Salty, and concluded that is still the preferred plan.

Yadier Molina has developed a reputation for calling a great game, and helping turn seemingly every Cardinal pitcher into a productive one. But again, properly assigning credit is challenging- is it Molina, the St. Louis coaching, or did the pitchers just get better? Adam Wainwright's control has taken a huge leap this year, but is Molina helping by eschewing waste pitches?

If run prevention is divided into pitching and defense, surely a portion of pitching is not actually on the pitcher. We're well underway on assessing pitch framing, but pitch selection is harder to pinpoint. Maybe its impact is only 20 percent of overall pitching, or even 10 percent. But I have a hard time believing it's zero.

For a sport that allows us to turn basically anything into a number, I'm not sure we'll be able to place an accurate value on a catcher's game-calling any time soon.

There's just too much subjectivity, too many moving parts. And I'm OK with that.