We simulate a 1000 seasons for Chris Davis given what we know about his first half totals, to discover just how great of a season he is on pace for or likely to achieve. Is the single season ISO or home run record in sight?

Share All sharing options for: Chris Davis and the Quest for the Single Season Home Run Record

Chris Davis came into the season as a underrated guy coming off a overlooked season. After once being a top Texas Rangers prospect, Davis was considered a "throw in" for the 2011 Koji Uehara trade along with Tommy Hunter. In 2012, his first full season in a Baltimore Orioles uniform, he performed strikingly well for a first baseman in the AL -- finishing up with a wRC+ of 120 and an 0.231 ISO (AVG - SLG).

So this transformation was not quite like Brady Anderson or Jose Bautista, the power potential was there. But the sudden godly power comes as a surprise nonetheless.

Now the question is, how likely is Chris Davis to break Barry Bonds single season home-run record of 73 in 2001. In order to achieve this feat, he would need to hit over 40 in the second half. I, for one, am skeptical of what Chris Davis is capable of producing going forward -- but we can assess the posible outcomes for Chris Davis' second half totals. For the sake of science let's simulate! 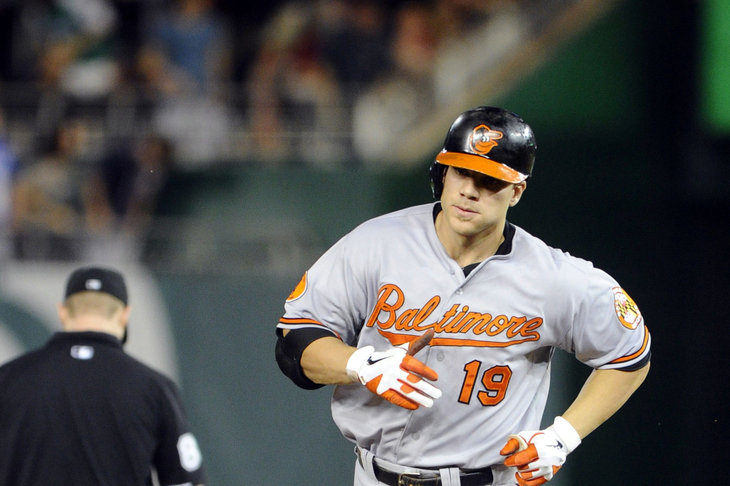 To simulate, we will use a method called Bootstrapping in R. Bootstrapping will resample the data into half-seasons and simulate them 1000 times. We will use the simulated counting stats from the simulated half-seasons and join it upon the already accumulated Chris Davis' stats today, in 2013. This will give us the projected end of the year statistics for Chris Davis.

To date Chris Davis sits at 4.6 WAR. So where should we expect him to end up? The answer is shocking to say the least.

The WAR was calculated by converting the wOBA total into wRAA, then a positional adjustment was added as well as replacement level. The RoS ZiPS UBR and UZR were added to the total. Then the entire sum was converted into wins -- 10 runs being one win. We will call this fWAR because it closely mirrors Fangraphs method of calculating WAR: 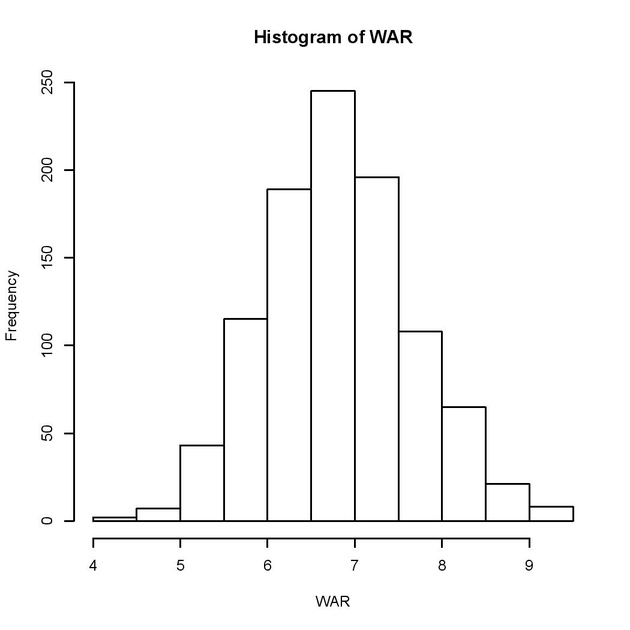 Coming into the season, many were not expecting Chris Davis to be a 7 or 8 fWAR player. Now given his impressive first half, there is a 45% chance he is at least a 7 fWAR player. In fact his original ZiPS projection was for 0.5 WAR. I think without projection or some simulation of sort, we can safely say that Davis will continue to blow that projection out of the water.

To date Chris Davis has a 0.466. Using the simulated counting statistics, we calculate wOBA of the simulated string of the projected totals. Given 1000 samples of wOBA, the simulation gave us these results: 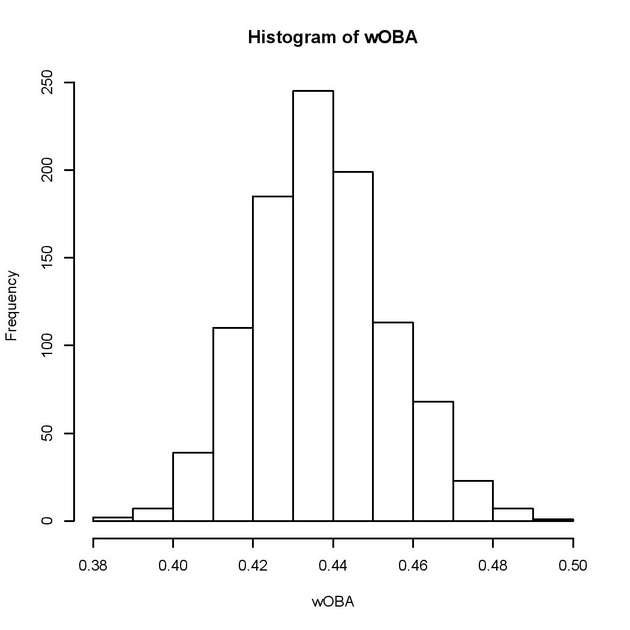 The distribution, gives us these probabilities:

Lastly, let's give you a look at Davis' projected end of the season HR totals. Will Davis have a chance at breaking Bonds' record? 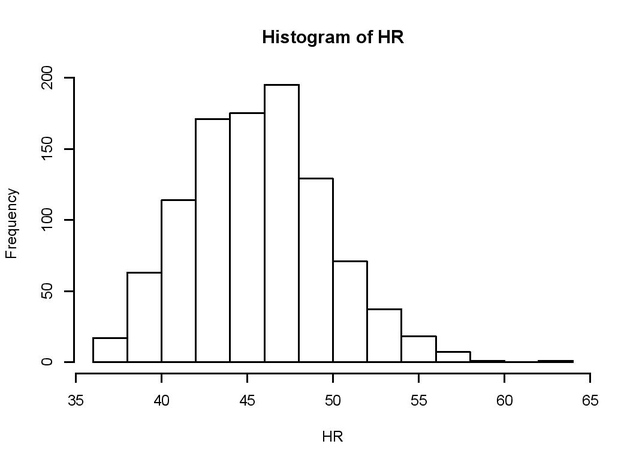 And that translates to the following distribution probability:

As you can see, given the past data, the simulation does not predict as many home runs in the second half. This is simply because the past three seasons do not show home run pedigree other than the 2012 season, which serves as 45% of the sample data. Given the 27% from the 2013 data, we have 72% of the entire sample coming from the last two seasons -- where Davis has shown his power. Still the other 28%, which outnumbers the 2013 sample, comes from a powerless 346 PA with 6 home runs over the 2010 and 2011 seasons, thus the simulation shows some power regression.

In the end, the simulation did not have one instance in which the HR total broke that of the single season home-run record, with the high being a 63 HR season. While this may be disappointing for some, a likely 50 homerun season in a post steroid era is a remarkable feat and 60 would be historical.

Now that we have found the simulator's predictions for what Chris Davis should end up with in wOBA, WAR, and HR, let's get a more full picture of what those seasons will look like:

Davis, as you can see here, is likely to have a season of sheer power that we have not seen since Bonds and A-Rod. When fans of the game or analysts look back 20 years from now and recollect on Davis' 2013 season, they will perhaps be more impressed with it than other great seasons from the early 90's.

The matter of the fact is that Chris Davis is (hopefully) genuinely hitting the ball out of the ball park, in an era in which the pitchers control the game. Watching along has been brilliant and awesome, knowing that there is no speculation of steroids. Now, we can just sit back and admire a truly great and historical season in the making.

If you are interested in the code used in R, that is located here.

The complete 1000 seasons for Chris Davis are located here.