The strike zone is called differently depending on the handedness of the hitter in the box. We examine the area furthest off the plate called regularly for strikes to see how left-handed hitters fare beyond the outside edge of the plate.

Share All sharing options for: Investigating the "Lefty Strike"

I still remember the first time that I read about the fact that the called strike zone for left-handed hitters was different than that called for right-handed hitters. While John Walsh had found similar results several years earlier regarding the called zone, it was in Mike Fast's work that I first learned about this phenomenon. I remember staring at the simplified formula for the dimensions of the strike zones by handedness described by Fast, first to convince myself that a difference is what he had actually found, then further to think about why this was the case.

To this day I do not know for certain the reason. As the catcher sets up behind the plate, the umpire invariably positions himself between the catcher and the hitter, which is to say toward the inside edge of the plate regardless of the batter handedness. From this perspective, the umpire would have a much better view of the inside corner than the far outside corner. The only consistent asymmetry that I can see is that all MLB catchers catch with their left hands, so perhaps there is something about the way they receive pitches relative to the umpire's vantage point that creates this imbalance. For instance, an outside pitch to a right-handed hitter would involve the catcher reaching his glove further across his body to receive it, while an outside pitch to a left-handed hitter would require just a slight movement of the left arm to the side. This is just conjecture - and while I would love to know the true reason, it is not critical for this investigation.

In terms of the horizontal extents of the zone, Fast reported from -1.03 feet from midline to +1.00 feet for right-handed hitters, but -1.20 feet to +0.81 feet for left-handed batters. Note that the total range is about the same size, but while the right-handed zone is roughly symmetric about the middle of the plate, the left-handed zone is shifted about two and a half inches away from the batter.

The official home plate rulebook definition specifies a width of 17 inches, and the diameter of a baseball is just under 3 inches wide. If we allow any pitch that grazes the outside edge of the plate to be considered a reasonable called strike, then we would expect horizontal strike zone extents of about -0.95 to +0.95. This is very close to what is called for right-handed batters.

In this article, I will focus on the region where the outside left-handed zone is extended beyond what right-handed batters have to deal with, namely the region within the top and bottom borders of the strike zone between -1.00 and -1.20 from the middle of the plate.

Certainly a difference has been confirmed here. While about 4 out of 5 pitches thrown this far outside are called balls with right-handed hitters at the plate, only about 4 out of 9 pitches are called balls in the case of left-handed batters. This seems like an interesting place to investigate for lefties, as it is squarely in the grey area where they could be playing with fire by taking the pitch.

Another relevant avenue of research that has been undertaken is that which found a different-sized called strike zone depending on the count. For the purposes of simplicity here, I broke down pitches in the region of interest for left-handed batters into pre-two strike counts and two strike counts. I believe this is likely the most important distinction that a hitter will make in choosing whether to swing at a borderline pitch in this region, so it is worth noting if there is any difference in the way these pitches are called in these situations.

There is an obvious difference here on the behavior of both the hitter and the umpire depending on the count. Umpires have been noticeably more apt to deem pitches in this region strikes when it will not directly lead to a strikeout. Left-handed batters are much more willing to let pitches in this area go by earlier in the count, yet swing at a much higher rate should a pitch arrive in this area when there are already two strikes.

We can also quickly check if there are any yearly trends in this "lefty strike" area. 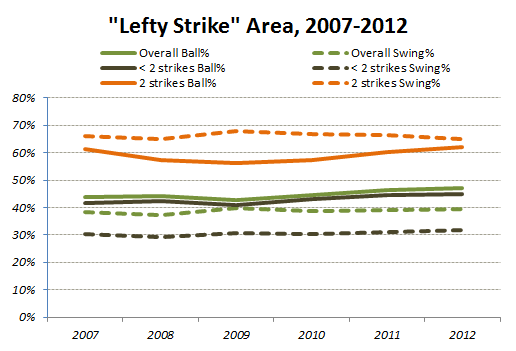 While at this scale there is nothing eye popping, there are signs that since 2009, when the rate of pitches called balls in this area was at a minimum, umpires have been more and more likely to calls these as balls over the past three full seasons. This is particularly visible in the rate of called third strikes in this area, which has dropped from its peak of 43.7% in 2009 down to 38.0% in 2012.

Now that we have seen the tendencies of both umpires and batters on pitches in this area, I wanted to investigate how hitters have performed on these pitches, to understand what the best course of action is to take in the general sense.

Again I will break this down by count into two groups, those with 0 or 1 strike and those with 2 strikes. With less than two strikes, when taken by the hitter the pitch has been called a strike about 57% of the time, after which the wOBA for the hitter has been .298. The other 43% of the time, the pitch has been called a ball, after which the wOBA for the batter has been a beautiful .397, which of course includes cases where this pitch itself was deemed to be ball four.

When the hitter has offered at this pitch with less than two strikes, if the pitch was swung through or fouled off, the wOBA after this occurrence has been .273. When the ball has been put in play, the wOBA has averaged .302.

Considering only counts with two strikes, when hitters let the pitch go by, these pitches were called for strike three 41% of the time, with of course a wOBA of 0. The other 59% of the time, when called balls, hitters managed a .333 wOBA after taking the pitch.

When the left-handed hitter has attempted to hit a two strike pitch in this region, he has performed to a .298 wOBA on balls put in play, a .274 wOBA after a foul ball to extend the plate appearance, and of course a big fat 0 when it became a swinging strike three.

The more summarized version of the results from the last six year period is shown below.

The results show that on average, the best strategy for left-handed hitters to employ on pitches in this area is to take the pitch in situations where there are less than two strikes, but swing the bat when faced with the possibility of the umpire calling the pitch strike three. This matches the swing rate pattern noted above that hitters have been employing. Ironically, in situations where hitters have been better off taking the pitch, umpires have been more likely to call the pitch a strike, and vice versa.

The results make sense to me. A pitch this far outside the zone is likely not one to expect hitters to drive very well in most cases, and the wOBA on contact made by hitters bears this out. For this reason, hitters are better off taking a pitch in this area earlier in the count, knowing that even if it is called a strike, they will have at least one more pitch to work with in the plate appearance that will hopefully be in a better area to hit. With two strikes, the equation changes, and hitters become more defensive, forced to swing at this sort of questionable pitch or risk being rung up.

With this understanding in place, we can take a cursory look at individual left-handed hitters over the seasons in question, to assess which hitters have been utilizing this theoretically better strategy and which have not. Here are the top and bottom ten hitters who faced at least 100 pitches in this area between 2007-2012, in 2 strike swing% minus 0 or 1 strike swing%.

The table shows how well hitters did at the combination of laying off these pitches earlier in counts but making an attempt to hit them when faced with two strike counts. Notice how far back from the pack super-phenom Bryce Harper was in his rookie season in 2012! Harper was in fact the only player who swung the bat more often at these borderline pitches early in the count than when up against it down two strikes.

Of course this is only part of the picture, as individual hitters will have their own performance level on hitting these pitches, but also certain hitters may have reputations for good eyes, or through some means see more pitches in this zone be called balls than the average hitter. Consider the following top and bottom ten of left-handed batters in terms of percentage of pitches in the "lefty strike" area called balls above average.

A couple of young hitters who have struggled mightily in 2013 top the list of hitters who perhaps through good fortune saw the highest percentage of pitches in this difficult to handle zone be called balls coming into the season. All-time great Ken Griffey Jr. is the only player to appear near the top of both lists, showing that he had good plate discipline in this area and that umpires may have given him the benefit of the doubt more frequently than other hitters. That A.J. Pierzynski makes this list may be due to the absolute shock that he let any pitch go by, catching the umpire off-guard such that no call is made.

Finally, one related current event (is it still current?) with respect to this "lefty strike" is the notion that the recently demoted Dustin Ackley was too passive and was never able to learn how to handle pitches in this area at the Major League level. While the belief likely stretches beyond this narrow band, we can at least say that Ackley did show a good approach within this band in the small sample size he was afforded prior to this season. He swung the bat just 16.9% of the time on pitches in this area with less than two strikes, then ramped his swing rate up to 71.1% with two strikes in the count.

Unfortunately for Ackley, while this analysis would suggest he was taking the best course of action in his plate discipline, his results were totally opposite of the league average.

No wonder Dustin Ackley was confused up there.

Credit and thanks to Baseball Heat Maps for PITCHf/x data upon which this analysis was based.