MLB and PED: A Black Eye That Just Won't Go Away

On Tuesday, ESPN's "Outside the Lines" reported that MLB was seeking to suspend multiple players--including Alex Rodriguez and Ryan Braun--for their involvement in the Biogenesis Clinic Scandal.

Share All sharing options for: MLB and PED: A Black Eye That Just Won't Go Away

This day in age, sometimes it feels like the acronyms "PED" and "MLB" cannot possibly be separated. Where one of them is used, the other one will shortly follow. Tuesday night's breaking news from ESPN's T.J. Quinn brought a relatively pleasant baseball season to a screeching halt:

Yet again, MLB has shown that it will go to no end to seek what it feels is justice for anyone who is even remotely linked to performance-enhancing substances. In a saga that started in January--see here for more details--it appears that the end game for MLB is to do whatever they have to to suspend players they think are involved.

"Whatever they have to" is not a phrase used in jest, either. In this article from the New York Daily News, it is noted that MLB filed a suit against Biogenesis ring leader Anthony Bosch and his band of associates. The suit was filed on grounds of contract interference and providing banned substances to active MLB players.

At this point, it would be euphemistic to say that (some) people are tired of hearing about PED use in professional sports. It's an old and tired topic that produces the same cycle of back-and-forth banter every time it appears on a Twitter feed, in a news article, or on a blog post. It's understood that baseball wants to protect the integrity of its institution, but one question needs to be asked: do the ends justify the means?

The answer to the question here is unknown, because it's really hard to gauge why MLB is pursuing this so strongly. Where is the benefit to an exhaustive search to find the cheaters? Sure, if Ryan Braun and Alex Rodriguez used PEDs, they should be punished. After all, they broke a rule. But what's the cost? Another public relations disaster that leads to more questions than it answers. Surely these investigations aren't cheap to operate, as MLB--noted in the articles above--has their own investigators and lawyers on the case. Do they think there is some sort of financial gain to be had from catching the bad guys?

Honestly, it's really hard to believe. In my humble opinion, the 1998 home run chase is still one of the greatest things to ever happen to this game we know and love. It created a sense of passion and excitement as Sammy Sosa and Mark McGwire went back and forth throughout the entire summer. Since this time, though, it seems that all MLB wants to do is back away from that great chase--almost acting as if it never happened.

MLB has always been clear on its message: catch the cheaters and punish them so. This time, however, it appears to be about more than just the cheating. Multiple sources have reported that MLB is seeking 100-game suspensions for Alex Rodriguez, Ryan Braun, and other players supposedly involved in the scandal. What is odd here is that 100 games is the punishment for a second-time PED offense. 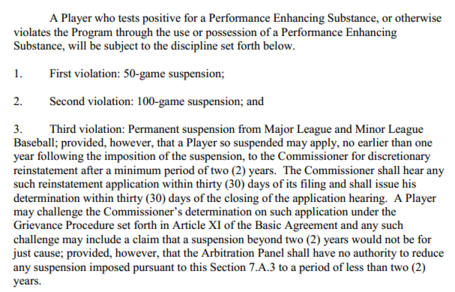 This is strictly about using substances. To this point, Ryan Braun and Alex Rodriguez have not been filed as first-time offenders of the Joint Drug Policy, so any suspension should be 50 games at a maximum. If this is the case, then why would MLB take it upon itself to go around the rules to seek more punishment than is required? Tough question.

The real issue here is that MLB is so focused on its search for guilty players that it has lost focus on what is important. Anthony Bosch isn't just some guy that advised a few players to use some drugs to get an edge on the competition. The man posed as a doctor and peddled substances known to be illegal in MLB. Matthew Pouliot of Hardball Talk points out here that MLB is willing to drop lawsuits, give protection, and even put in a good word with law enforcement for Bosch in exchange for information on Braun, A-Rod, and other players.

When you have a leak, you don't fix the problem by collecting the water in a bucket. As MLB should have figured out by now, the bucket constantly fills and eventually needs to be emptied or replaced. The only way to get at the core of the PED issue is to get at the source--this happens to the suppliers, not the consumers.

A-Rod and Braun are admittedly rather big gushes of water that the leaky PED pipe has produced, but they aren't the only ones who have or will ever be linked to PED. What MLB needs to do is prevent guys like Anthony Bosch from doing as he has supposedly done. Choosing to deal with water rather than fix the pipe is exactly what is wrong with MLB in its approach to the PED manhunt.

The PED issue is a black eye that has plagued MLB for years. With the current approach to investigation and prevention, there's nothing that's going to stop a player from using some sort of substance to gain an edge. For the players, the reward seemingly always outweighs the risks.

Perhaps the answer is for MLB to push for a zero tolerance policy. After all, it would help the league save face and would purify the union of wrong-doers. At the same time, it can also be argued that the league should drop the matter altogether. Baseball is in the entertainment business, and the end goal is to put on the best show to bring in the most money possible. Players that use PEDs are just doing what they feel they need to do to perform to the best of their abilities. If a substance existed that helped everyone in the world do their specific jobs more efficiently, it seems unlikely that society would frown upon the use of that substance.

For now, MLB has a serious problem on its hands and nobody but itself to blame.