Share All sharing options for: Can Francisco Liriano Maintain His Early Dominance?

As a Twins fan I love watching Francisco Liriano pitch. He can be the most frustrating pitcher to watch, but when he's on he can be one of the most exciting pitchers. When he got hurt during the summer of 2006 I was devastated, because I wasn't sure if he'd ever be the same pitcher again. In 2010 Liriano had his best season of his career, posting nearly 6 fWAR, while striking out 25% of batters faced. It appeared that Liriano was back to his days as a rookie, but I was still being cautiously optimistic.

As it turns out, 2010 appeared to be a fluke, because the next two seasons he only posted 2.4 fWAR, and a 4.43 FIP. The command issues returned, and things were not looking good. Liriano ended up being traded to the White Sox during the summer of 2012, ending his tenure as a Minnesota Twin.

The Pirates took a gamble on Liriano, giving him a two year-$12.75 million dollar contract but after Liriano broke his arm on Christmas day they went back to the negotiating table. Eventually they agreed to a one year-$1 million dollar deal, with a vesting option for 2014. Read more about his contract here.

After making a handful of starts in the minors, Liriano made his 2013 debut on May 11. In his first start he went 5.1 innings, striking out 9, walking 2, and only giving up 1 run. He was impressive, to say the least. That trend has continued, and in five starts he's gotten strikeouts 31.5% of the time, has walked just 7% of batters, and has yet to give up a homerun. All and all that equates to a 1.31 FIP. He's only pitched 29 innings, but among all starters that ranks as the best FIP in all of baseball.

Is Francisco Liriano Worth a Gamble? 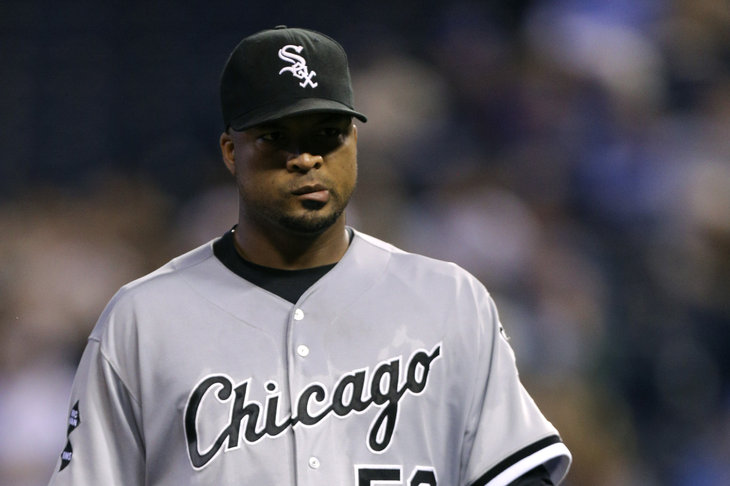 I looked at if Francisco Liriano was worth a gamble, earlier during the off-season.

What has been the secret behind his success this year? Let's take a look.

For those that don't know Liriano primarily throws a sinker, a changeup, a slider, and a fourseam fastball. With the first three being his main pitches in 2013. His slider has traditionally been his go to strikeout pitch, usually generating the largest amount of whiffs, and this year has been no different. When he's thrown it batters have been whiffing nearly 54% of the time, compared to 43% during 2011-2012 when he was struggling. He hasn't induced ground balls nearly as often, but that hasn't taken away the effectiveness of the pitch. According to FanGraphs, batters have only managed a .137 wOBA when the slider has been thrown, compared to his .237 career mark.

According to Brooks Baseball, Liriano's release point when throwing his slider has been fairly constant. He is getting a little more fade than the past years though, so it's possible that he's throwing it with more spin this year, or that he's cleaned up his mechanics a bit.

His changeup has also been extremely successful, getting batters to whiff 47% of the time, up from 43% during his last two seasons when he was struggling. His ground balls per balls in play is also down with his change, but again it hasn't mattered, because his changeup has been awesome. Batters have only managed a .228 wOBA when facing it. The movement hasn't changed, he's still getting good depth and fade, but he has been throwing it a full mile per hour faster, going from 85 to 86 MPH.

For those that like them, and who doesn't, here's a GIF of Liriano striking out Tigers outfielder Matt Tuiasosopo with the change. 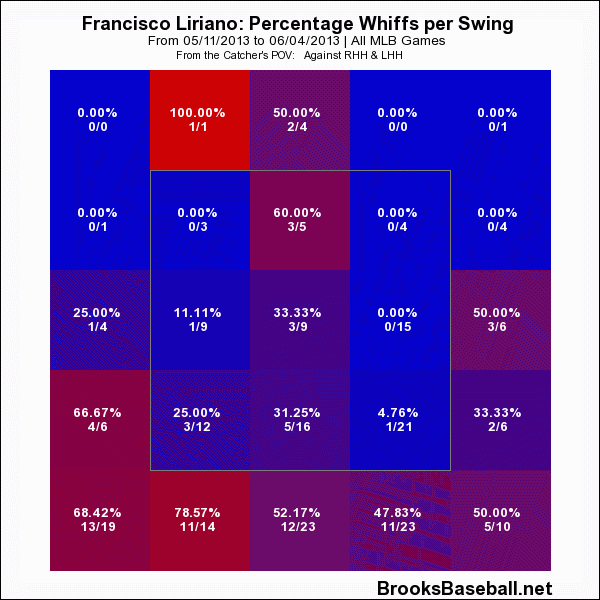 This is just a chart that shows where all of Liriano's whiff/swings have come from during his 2013 season. As you can see the majority comes from when he keeps the ball low, and away. He's done an exceptional job at pounding the corners, and to remain successful he'll have to keep doing that as the year goes on.

Liriano has been a huge part of the Pirates early season success. While regression is almost expected, Liriano has shown in the past that he can be a dominant pitcher. He currently has 1.2 fWAR, and if he can finish the year with 3-3.5 fWAR the Pirates should be extremely pleased.

All stats come from Brooks Baseball and FanGraphs