Cole Hamels and the Art of Discussing Progressive and Conventional Metrics

Cole Hamels hasn't performed as well in 2013 as he has throughout his career, but his difficulties are being portrayed as monumentally awful due to the overuse of conventional pitching statistics that distort the truth of the situation.

Share All sharing options for: Cole Hamels and the Art of Discussing Progressive and Conventional Metrics

Ever since Baseball Prospectus came out with "Baseball Between the Numbers" and gave those searching for baseball enlightenment a proper lesson in the importance of pitcher wins and losses.

"To many fans, then, the primary way to measure a starting pitcher's success is his won-loss record. Any pitcher worth his salt should win more than he loses, and a 20-win season is the hallmark of success."

The writers of that particular chapter ,Keith Woolner and Dayn Perry, go on to articulate that a win comes from an entire team effort, an offense scores runs after which a pitcher does his part in run prevention, and a defense that adds its support defensively as well. Add in some minor substitution manipulation by the manager and some positioning help from the coaching staff, and starting pitchers begin to accumulate wins. Fans understand won-loss records, it's simple, easy to gloss over and consume over morning coffee. Teams have won-lost records, and when a your team has wins your happy, so why shouldn't the same be true of pitchers?

If you read Beyond the Box Score or have somehow found your way here, there's a decent chance you've already 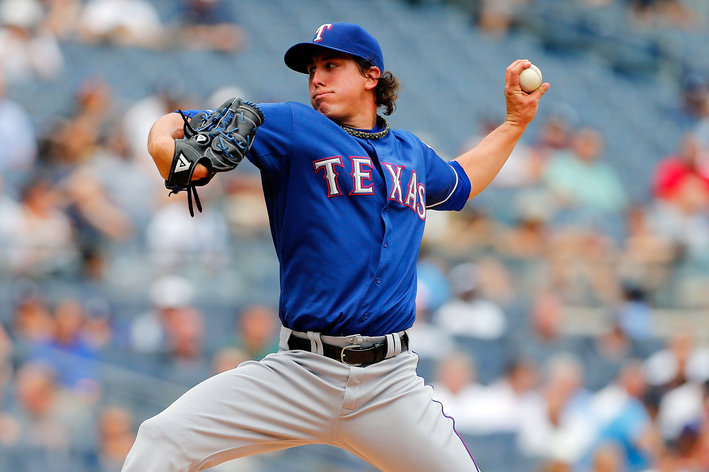 Mike takes a look at another southpaw who dominates the mound, Rangers lefty Derek Holland.

discarded any niceties towards pitcher's won-loss records, doing so for the best. The more mainstream baseball world continues to display and use such statistics in the common vernacular when performing analysis.

When it comes to websites and other such publications that consider themselves a bit more progressive in analytic nature, one would expect articles from said websites to be devoid of such unavailing measures of a pitcher's productivity as wins/losses and simple earned run average. Instead of doing away with these lackluster measuring sticks by educating and showing readers the inherent flaws associated with such statistics and then transitioning those readers to metrics that provide more truth in analysis.

Instead, publications write articles, like this piece written by Jerry Crasnick of ESPN, that center around these antique metrics, not in discussing the pros and cons associated with them, but instead to use them as tools of interest to entice readers to read but remain unenlightened. In discussing Cole Hamels' less-than appealing won-loss record, Crasnick notes:

"Hamels, a three-time All-Star, is 2-11 with a 4.58 ERA through 17 starts. He has already tied his single-season high for losses and recently became the first Phillies pitcher to lose 11 games before the end of June since Claude Passeau and Wayne LaMaster achieved that notable distinction in 1937."

Stepping back for one second from the grander point, I can't fault Crasnick completely; he makes sure to note some important factors concerning won-loss records for pitchers. While the article may not speak for his personal views, the general tone lacks conviction in attempting to point out the flaws in the most conventional pitching statistics.

"But won-loss records can be deceptive, obviously, and Hamels' 2-11 mark has been caused largely by circumstances beyond his control. He ranks 87th among 98 MLB starters in run support and has been tagged with losses or no-decisions in games decided by scores of 2-0 (twice), 2-1 (twice) and 3-2."

Crasnick titled the piece "The Bad Luck Club" but Cole Hamels may not actually be unlucky. Instead, it's quite possible that the Phillies' lefty has pitched well, but not nearly as well as in previous seasons, leading to passable numbers in some aspects of his game, and apparently horrid ones in terms of earned run average and won-loss record.

Just to get a sense of Hamels' 2013 numbers both in a shorter-term glance and a longer-term one, take a look at these numbers.

Cole Hamels has always made his living by confusing hitters with one of the best changeups in the game, combined with a plus fastball, and some of the most repeatable and well-repeated mechanics in the game. Unlike most stingy left-handed pitchers, Cole has never employed a harsh breaking ball, even against left-handed hitters, but over the years he has adapted to the league by adding in a cutter, as well as mixing in a curveball now and again.

When looking at Hamels' pitch usage according to Brooksbaseball.net we see that Hamels has reduced the number of changeups he throws hitters, albeit not by a significant amount, and introduced a cutter in 2010 that he now utilizes about 1/5 of the time. When separating some of this data into handedness, it seems that between 2012 and 2013, Hamels has increased the number of fastballs he's throwing hitters on both sides of the plate from about 45% to just above 50%. Especially to left-handed hitters, Hamels has used his non-fastball pitches less frequently, meaning due to bad control he has found himself in more hitter-friendly counts, he's possibly tipping his pitches, or he lacks confidence in his off-speed pitches specifically in 2013.

At the end of his piece, Crasnick makes it clear that Hamels has probably pitched better than certain statistics show.

"Hamels isn't the only prominent big leaguer who has performed better this season than some of the more conventional numbers suggest."

This sentiment resonates more closely with progressive thought concerning pitching analysis, but I feel that the piece could have been more effective had it proposed a similar message using the an inverse method. Instead of beginning with Hamels' conventional numbers, use a common method employed by numerous sports writers. Compare Hamels to another pitcher, but use aliases for them. Call one player "A" and the other player "B", showing how Hamels has pitched at an above average clip in 2013. Next, move on to discuss how this diverges from the southpaw's recent and career numbers, and end with the same conclusion, that Hamels looks dreadful using conventional and outdated metrics. I feel that this would provide those who read the articles with a better perspective, no only on the 2013 version of Cole Hamels, but on the evaluation techniques of pitching as a whole.

Big thanks to Fangraphs, Baseball Prospectus, and Baseball-reference for assistance with the statistics used in this piece.