Holland has had inconsistent results throughout his young career, but has seemingly put it all together. What has led to the development of Holland's slider as a dominant, nearly untouchable pitch?

Share All sharing options for: Derek Holland develops his slider, throws a 'Maddux' and continues dominance

Derek Holland was picked by the Rangers late in the 2006 draft and quickly climbed through the minors. Baseball America ranked him as the No. 2 prospect in the team's system after the 2008 season and as the #31 prospect in all of baseball too. He made his debut in 2009 starting in the bullpen but eventually started 21 games and finished with a disappointing 6.12 ERA. Holland spent half of the 2010 season in Triple-A but has been up with the major league club ever since while producing inconsistent results. So far this year, Holland seems to finally be putting it all together, even throwing a dominating two-hit, seven strikeout "Maddux" yesterday afternoon (albeit against a seriously depleted Yankees lineup). Through 106 innings in 2013, he's sporting a sparkling 3.14 ERA / 2.75 FIP. Holland has been great this year and his performance is legitimate thanks to the development of his slider.

Perhaps the most considerable difference in Holland's mechanics this year has been the change in release point. He has dropped his horizontal release point by about three inches while increasing his vertical by a little bit more than two. They're subtle, but hopefully still recognizable through my first attempts at making a GIF.

Is Holland throwing harder? Not necessarily. While his fastball and sinker are almost half a mile an hour faster than last year, his slider's velocity has remained rather flat. Velocity isn't a factor here but there has been a noticeable change in movement. From 2010 onwards, Holland's slider averaged about three inches of horizontal movement. In 2013, it's hovering at around 1.7 inches. Vertically, it hasn't really changed. 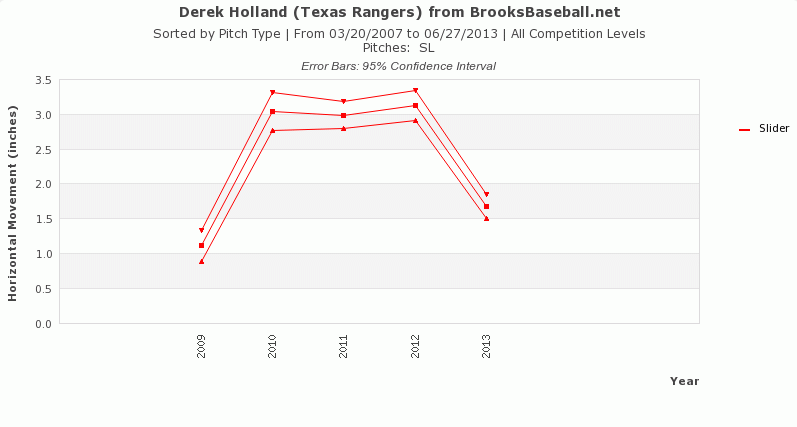 This decrease in horizontal movement may show that Holland has more control of the slider, meaning he has a greater ability to know where it's going and therefore can consistently throw it for strikes. 38% of Holland's sliders are being thrown for strikes this year, more than any other pitch. It has a swing rate of over 53% with 47% of those swings being whiffs. Post-2010, his slider has been used less and less as a put away pitch, until now. When he's ahead of left handed batters, he's throwing it 42% of the time and 36% against those that are right handed. He's fooling batters on both sides as shown by an impressive 25% whiff rate, a noticeable increase over the past couple years. 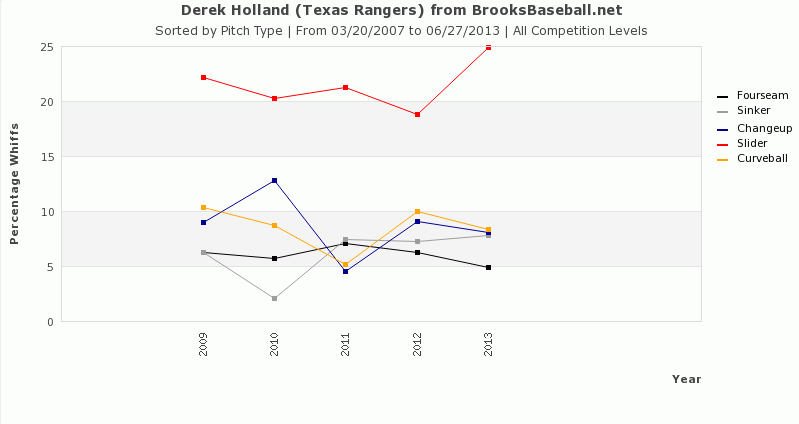 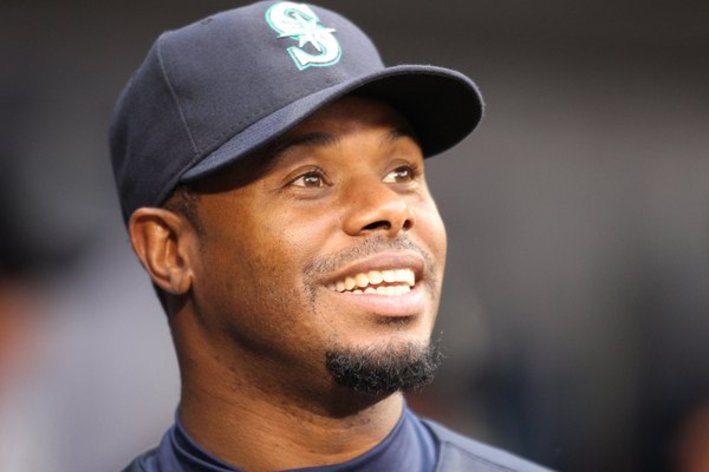 Holland is excelling against all hitters and especially against lefties. But the strike zone is called differently depending on the handedness of the hitter in the box. Jon investigates how left handed batters fare on pitches on the outside edges of the plate.

So Derek Holland has changed his release point, which may have something to do with his improved command, especially on his slider. He's walking fewer batters than ever before (2.29 per nine) and hitting the zone at a 49% clip, confounding batters with a 62% first strike rate. With more precise movement, control and command, Holland's slider has become a cornerstone of his pitch arsenal and has doubled in usage from last year to 25%. As a lefty pitcher, his slider is cutting across the zone and becoming a serious problem for left handed hitters. 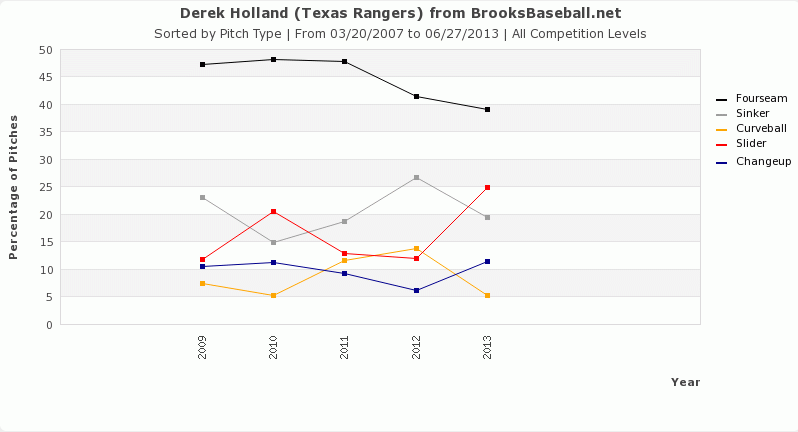 Yesterday's "Maddux" against the Yankees was awfully impressive. It isn't going to be considered some flash-in-the-pan performance. Derek Holland has been dominant for the Rangers in 2013 and should continue to be.

Big thanks to Brooks Baseball for their new, improved and incredibly easy to use dashboard. All statistics courtesy of FanGraphs and Brooks Baseball.

Mike Mulvenna is a writer for Beyond the Box Score.