When will the "Year of the Pitcher" end?

Since the end of the Steroid Era, we have been living in a perpetual "Year of the Pitcher." Could that era possibly be coming to an end?

Share All sharing options for: When will the "Year of the Pitcher" end?

The first two weeks of June 2012 are highly emblematic of the past few years in baseball. On June 1st, Johan Santana threw the first no-hitter in New York Mets history, shutting down the St. Louis Cardinals, 8-0, in 134 pitches. Seven days later, the weak-hitting Seattle Mariners managed a six-man combined no-hitter over the Los Angeles Dodgers (winning of course by the barest of margins, 1-0). Finally, five days after that, Matt Cain topped it off by throwing the second perfect game of the season, dominating the hapless Astros for the second-highest Game Score in history with 101.

We've seen a lot of great pitching recently in the majors. Over the last five years, we've seen 18 no-hitters, with six perfect games amongst those. It has been clear that as the steroid era waned, a new era of the pitcher dawned.

However, this era will not live forever. Baseball is, after all, a cyclical game. When the era comes to an end is decidedly up for some debate. However, looking back at baseball's past cycles might give us an idea when offense will rise again.

To being with, let's establish that we're going to look at this study by using wOBA as the statistic of choice. So let's look at wOBA (for qualified players) through the years. 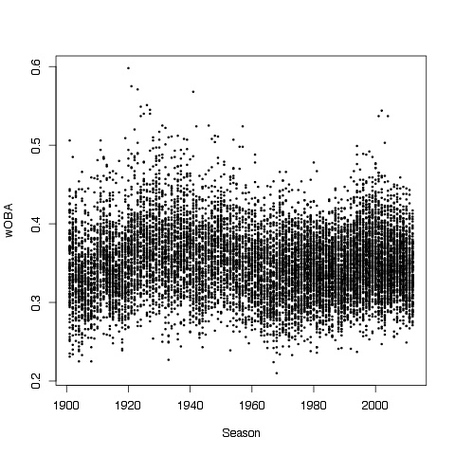 You can see some semblance of cycles going on in this data. However, we can get a better idea by trying to fit the mean function f(x). We'll attack this by fitting a non-parametric spline of wOBA over the years. 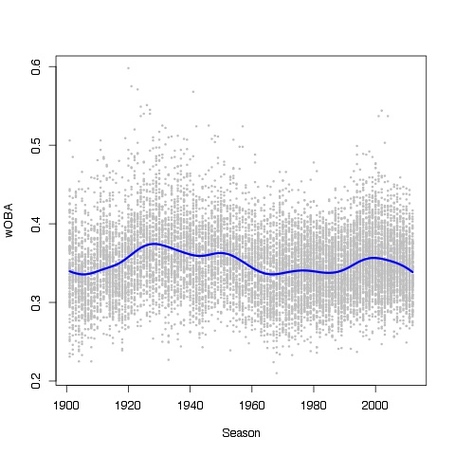 So, just a cursory examination of these shows that each of the five completed eras last around an average of 20 years. But let's look at each of these eras individually.

The Rise of Offense owes a lot to the existence of Babe Ruth and the end of the dead ball. The ball allowed more home runs to be hit, and Ruth made them cool. But other players took advantage of the new ball, with incredible numbers being put up by Rogers Hornsby and Lou Gehrig, among others.

In 1931, baseball changed the ball again. This time, the ball was slightly deadened, and offense finally slowed down. Overall, offense declined a little, but things mostly held steady for the next 20 years. 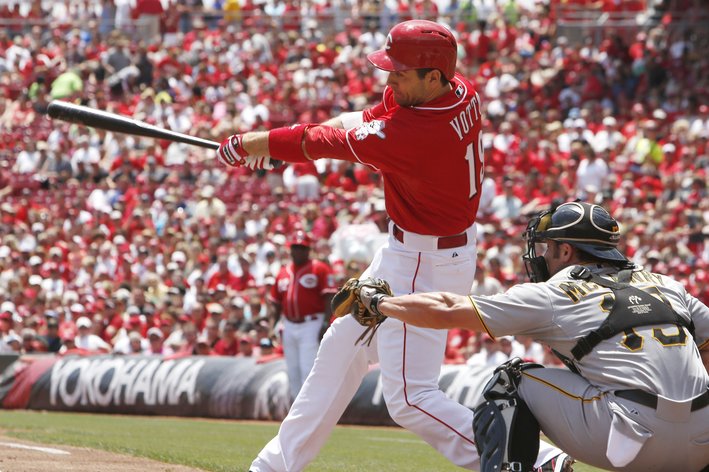 Just because we're in the Year of the Pitcher doesn't mean hitting is dead. Take a look at the hitters we at Beyond the Box Score chose as our 2013 National League All-Stars.

Between 1951 and the pitcher's heaven of 1968, offense declined. The league average wOBA dropped to levels not seen since the dead-ball era. While many great hitters came into their own in this era -- Mays and Aaron just to name two -- the pitchers seemed to gain the upper hand.

Baseball made a notable rule change after the 1968 season: lowering the height of the mound. Tired of pitching dominance, the lower mound was supposed to add a slight jolt to offense. This, combined with the addition of the DH in 1973, stemmed the tide of pitching and an overall balance appeared to be reached.

However, things would not stay that way forever. Players will often do whatever they can to rise to the highest peak. And in the 80s and 90s, that desire to perform unfortunately led to the Steroid Era. Even though both pitchers and hitters used steroids, the hitters seemed to benefit more, as the league average wOBA rose near its rabbit-ball levels.

Finally, in the early 2000s, steroid testing made its way into baseball. With the increased penalties for steroid use, offense died down some and pitching became dominant, at least when compared to the excess of the late 90s.

So it appears clear that there are overarching cycles that define baseball's offensive production. However, within each overall cycle there appears to be two-to-three "sub-cycles" that exhibit brief increases or decreases in production. These sub-cycles aren't the starts of new cycles, they just are brief five-to-seven year increases or decreases from the current state.

This can be seen in our fits of the mean function f(x). One of the benefits of nonparametric regression is that we can adjust our function to concern itself more with local estimation. So, let's look at the more localized fit. 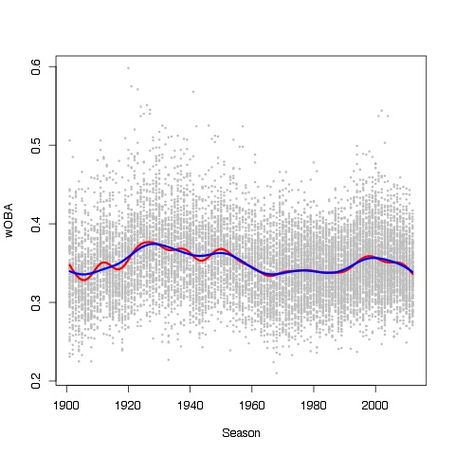 You can see some of the cyclical pattern here, but let's make it more apparent. The following graph shows the localized deviation from the overall trend. We'll see a clearly cyclical pattern when looking at this difference. 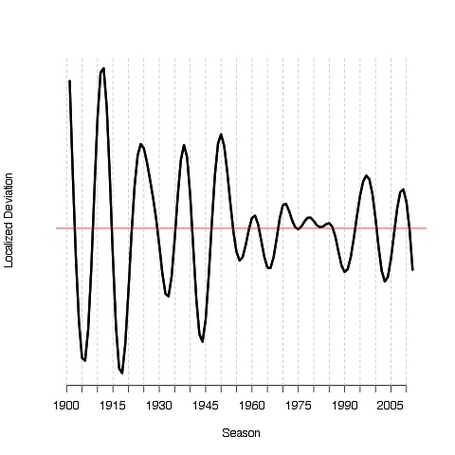 It doesn't get much more cyclical that that. From this graph, we can see that each sub-cycle lasts roughly about seven years. Now, we have information on the overall cycles and sub-cycle of baseball. Let's look at the state of baseball at the current moment.

Baseball As It Currently Stands

As we can see, offensive production in baseball is on its downside. We're currently working on a downward overall cycle and a low sub-cycle. If history is any indicator, we could be coming toward the end of this current sub-cycle. This could start a slight uptick in production, but it would still be on the overall downward trend.

However, is the downward trend slowing? To examine this, we'd need to look at the rate of change in our mean function f(x). In other words, we need the derivative f '(x), which we are able to calculate and graph. 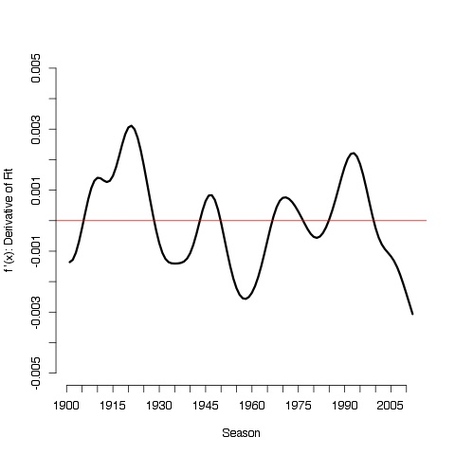 The larger the |f '(x)|, the steeper the rate of change. So it doesn't appear that the rate of change is slowing. In fact, it's been growing on the past few years. However, if in fact the seven-year sub-cycle is coming to an end, this derivative should slow towards 0 in the coming years.

Baseball And the Impetus For Change

There's one final unknown that makes any prediction about when the Year of the Pitcher will end difficult. We see this factor clearly when looking at the beginning/end of the past six eras.

Every era here has some sort of cause to its change. Whether it was a rule change (lowering the mound), equipment change (the "live ball"), or chemical change (steroids), there was something that predates the era that may have partially created the era. Who knows what the next rule change is that could slow pitching.

So here's where we put everything together, and make a prediction about what we're going to see in the near future. To recap, we have overall cycles that tend to last anywhere between 15-20 years, with two-to-three sub-cycles of around seven years each.

Prior to the Steroid Era, baseball had reached a sort of homeostasis. Average level of wOBA was relatively flat-line for those 17 years, with little sub-cycles all during that time. I think we are headed to a similar homeostasis in the near future. The question is how and when we get there.

By the looks of things, we are three or four years away from the end of the current sub-cycle. At this point, I think we'll reach the end of the Year of the Pitcher. We'll reach the homeostasis achieved from 1968-1985, and I think (with improved drug testing), we'll stay there.

Also, an interesting development could be the potential impetus for the end of the era. Bud Selig is retiring prior to the 2015 season. I think it's entirely possible that the DH is introduced to the National League by the 2017 season, a couple years after Selig's retirement. That could slightly increase overall offensive production, and mark the end of the Year of the Pitcher.

So, to view what that could look like, we have the following graph. The darker grey points are the actually observed wOBAs from 1901 to 2012. The lighter grey points give us a predicted distribution of wOBAs over the next 20 years. The blue line gives us the general overall trend for 1901 to 2012, and the red line gives us the localized fits during that time. Finally, the green line is the predicted overall trend for wOBA over the coming 20 years. 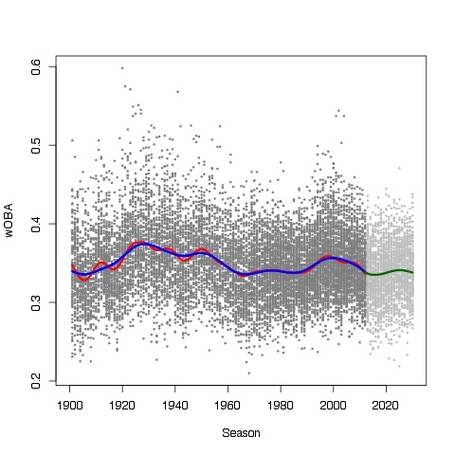 So, to recap everything. Baseball is cyclical, and we're just in the trough of one of the sub-cycles. I'm predicting that this sub-cycle and overall cycle ends in 2017 -- give or take a year -- with this end being marked by the introduction of the Designated Hitter to the National League. At this point, baseball enters a plateau or state of homeostasis that I believe will persist, at least until baseball makes a significant rule change or the new designer steroid comes about.

Stephen Loftus is a staff writer for Beyond the Box Score.