Gerardo Parra: A star on the rise

This is the story of a fourth outfielder turned stud starter. Due to the way the All-Star ballots are set up, Gerardo Parra is nothing more than a write-in candidate. Since he's not getting the love he deserves there, the very least I can do is show him some love here.

Share All sharing options for: Gerardo Parra: A star on the rise

Gerardo Parra has always been "the other guy" in the Diamondbacks organization. This off season, the club went and made a bunch of moves in the outfield which resulted in Parra maintaining his status as the fourth outfielder. After an injury to Adam Eaton, Parra has gotten the opportunity to start every day. To this point in the season, he hasn't just filled the spot; he's turned himself into one of the better outfielders in baseball.

It we take a look at Parra coming into the season, it's easy to see why he was viewed as a fourth outfielder. His defense was excellent, but his offensive numbers left something be desired, primarily due to his career ISO numbers. Going back to 2009, Parra's ISO totals failed to reach higher than .120--outside of a nice jump to .135 in 2011--which is particularly disappointing for someone playing half his games at Chase Field.

2013 has opened up new opportunities for Parra. This is his age 26 season, which suggests that he is heading into the best years of his career. If we look at Jeff Zimmerman's take on age curves, Parra should be peaking right now. The data suggests that he is doing exactly that. Here's a quick peak at what Parra has been trending towards:

Offensively, Parra has shown steady improvement across the board. He's reduced his strikeouts, increased his walks, and increased his power. Going by his plate discipline numbers, Parra has changed himself for the better relative to the last few years. His SwStr% is down to 8.6, which is well below his career average. Along with this, he is swinging at fewer pitches--just 49% of the time--and is making more contact both in and out of the zone--92.7% Z-Contact% and 70.5% O-Contact%--both are at or near career highs.

In addition to his improved offense, which is driven by being more selective and making more contact, Parra is also having a career-best season in the field. Here is a table expressing some of Parra's defensive rates per 162 games:

This has all translated into a career-year across the board. However, Parra is not without faults. For whatever reason, either he or his managers continue to have him attempt to steal bases. Thus far, Parra has stolen six bases but has been caught a staggering nine times. Outside of his 2011 season, where he stole 15/16 bases, Parra has simply been a bad base-stealer. Adding up his numbers outside of that 2011 year, he is just 27 out of 52, which is good for only a 51.9% success rate. Ouch.

Fangraphs' Dave Cameron has a clear message for Gerardo Parra: stay put on the bases.

Fortunately for Mr. Parra, the biggest flaw in his game--his caught stealing rate--is the easiest thing to fix. If he simply stops trying to steal, he won't be thrown out, and he won't be losing his team runs. In terms of overall value, Parra has been steadily improving. When his fWAR, rWAR, and WARP are put over 162 games, we get a chart that looks something like this: 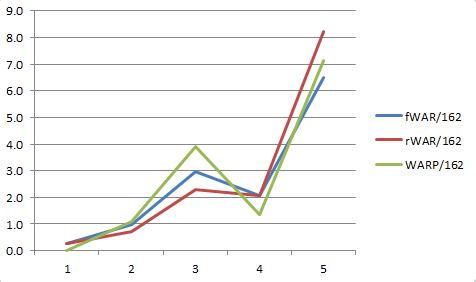 The general trend for Parra has been improvement, outside of a dip in 2012, where he saw inexplicable negative jumps in his rates from SwStr% to FLD to ISO. Now that he's gotten the opportunity to play every day, he appears to be over these lumps in his career trend. While his HR/FB ratio and BABIP are at career highs, it does not appear that those numbers are flukes. As mentioned before, he's improved his plate discipline.

Another trend that has helped Parra immensely is that he is hitting the ball on the ground more, which plays more to his speed: 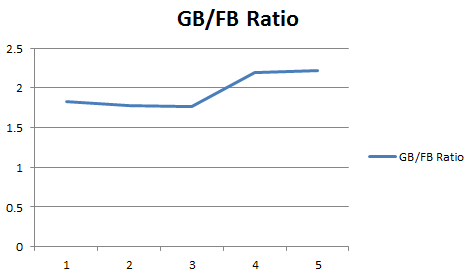 Along with keeping the ball on the ground, Parra is driving the ball much more when he puts it in the air. This kind of combination reduces the number of easy fly ball outs, which should lead to an increase in overall BABIP.

Gerardo Parra is 26 years old and is getting his first chance to start as an every day player. The timing of this opportunity comes right as his skills are peaking, and he's shown an ability to shine in the field. With plus speed and a great throwing arm, he is an elite defender in the outfield. Due to his increased discipline at the plate, he is also driving the ball and increasing his power, which has turned him into a significant offensive threat.

It could be that Parra is playing the best baseball of his career, and at a pace of over six WAR it's easy to believe that that is the case. However, as in any scenario, we have to accept the possibility that this is what Parra can be. Maybe, just maybe, Gerardo Parra is among the best outfielders in baseball.

Whatever the real answer is, we'll find out in due time.

Big thanks to FanGraphs, Baseball Prospectus, and Baseball-Reference for the data that went into the piece. A big thanks to Dave Cameron for his excellent article on Gerardo Parra's base-stealing woes. You can follow Dave on twitter @DCameronFG.

Ken Woolums is a writer for Beyond the Box Score and Off Topic. You can follow him on twitter @Wooly9109.