It has been well-established that the draft is an important resource for teams, but just how much are top selections worth and should teams be doing more to maximize their return?

Share All sharing options for: 2013 MLB Draft: How valuable are draft picks?

When high school right-hander Shaun Anderson was selected by the Washington Nationals with the 1,216th pick of the 2013 Rule 4 Draft, another draft was in the books. Despite claims that the MLB draft receives little attention from media and fans, the first two rounds were once again televised on MLB Network, and SB Nation has over 500 draft-related stories from blogs in the baseball network. Every year, amidst the multitude of draft coverage on the internet, there is a small segment of writing that is devoted to researching the values and strategies that should be applied when selecting amateur players. Interestingly enough, each author seems to use historical data when assessing the worth of draft picks, which got me thinking -- is there a better way to decipher the value of these selections?

I can understand why many researchers use historical data in their studies. Intuitively, it may make sense to use the players that were selected first overall when trying to figure out what the number one selection is worth, but that misses a large part of what makes that pick so valuable -- the team that has the first pick is the ONLY team that has a shot at the top talent in the draft. In theory, if the scouts get everything right, the best player should go first, the next-best player should go second, and so on until the end of the draft. Thinking about that gave me two questions that I want to answer:

Like I mentioned above, there has already been some great research on valuing draft picks, with one of the best articles unsurprisingly coming from Baseball Prospectus alumnus, Nate Silver. While his work focuses on deriving which picks were or were not worth giving up for a free agent, I can still use his format as a model to answer these questions. 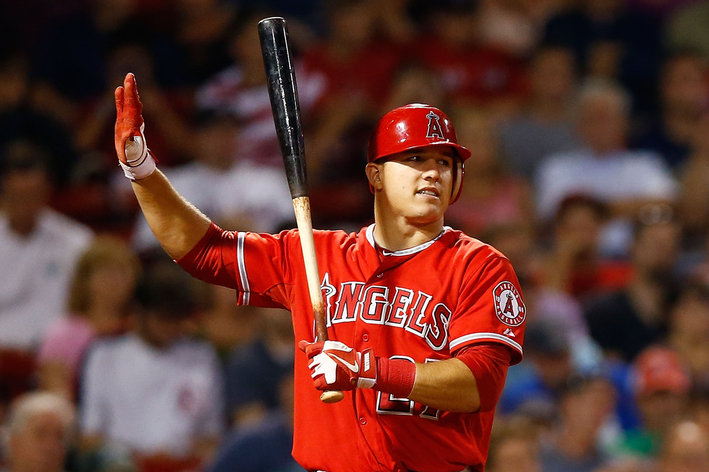 Want to read more about the Rule 4 Draft? Here's everything you've ever wanted to know about the event.

As Silver correctly identifies, the worth of a prospect is in his potential to produce at the Major League level during his first six big league seasons. This is due to MLB's salary system that pays players very poorly (relative to their market value) for their first six years of service time before they become eligible for free agency. With that in mind, I will only look at the first six years played in the big leagues to evaluate each player. That will mean that service time for some players may be slightly incorrect, but it should serve as a fine approximation. For the purpose of this study, we will estimate that players are paid 31% of their market value during the years before free-agency, a number that was derived by using $500,000 as a first year salary, $750,000 for the second year, and the arbitration findings from John D. Burger and J.K. Walters' paper that Silver references. As in Silver's study, we will account for the signing bonus later.

More importantly, we also need a measure of value both for the "best" players in the draft class, as well as the actual selections. To do so, I looked at each draft from 1990-2006 and compiled the fWAR for the top-100 players (ranked by 6-season WAR) and for the top-100 draft picks, excluding the players that did not sign. I then compared the results from the top-100 players with the draft picks, as well as the difference and average between the two.

Quickly before we start, I'll explain the following tables - No. 1 Player refers to the player from the entire draft class that produced the most value in their first 6-years, No. 1 Pick refers to the actual first pick, Difference refers to the difference in production between the two, and Average is the average production of the top player and the top draft pick. The 6-year fWAR is an average of the players from the 17 draft classes, Market Value is found by multiplying the WAR by the $4.92 million per win cost found here, Marginal Cost is found by taking 31% of the market value as outlined above, and the Signing Bonus is an average of the top slot from the tier (so the 8th pick in Tier 4) from the 2009-2012 drafts. *All $ amounts are in millions.

With that in mind, let's get to some values:

To no surprise, the first overall pick in a draft is an extremely valuable commodity. Owners may complain about the signing bonuses paid to top picks, but on average, the performance from top picks has far exceeded the cost to the team. The actual top selections from the 17 drafts used have provided an average of $33.51 million net value over their first six seasons, a sizeable amount. Yet if you look at the net value of the top player selected in each of those drafts, you see that teams have left an average of nearly $50 million on the table by picking incorrectly. While there are some great actual selections - including Chipper Jones, Alex Rodriguez, and Joe Mauer - names like Derek Jeter, Nomar Garciaparra, Scott Rolen, Tim Hudson, Chase Utley and Albert Pujols illustrate just a few of the missed opportunities atop the draft.

Although the actual players that have gone second in the draft have performed a little bit better than those taken 3-7, the difference between the best players and the actual picks in these two tiers is extremely close. Considering players like Adam Wainwright, Barry Zito, C.C. Sabathia, and Manny Ramirez were some of the players that teams passed on in Tiers 2 and 3, it stands to reason that $30-40 million of value is a reasonable figure for the difference.

Tier 4 takes us through the top half of the first round, where we start to see a drop off on the impact these players make on the field. The first three picks in this tier are protected from free agent compensation, but this is the level that organizations need to begin thinking about sacrificing a pick to sign a top free agent. While every draft is different in terms of available talent, a good general rule is that if a team deems a free agent to be worth more than two wins a season, it makes sense to give up the pick.

Tier 5 encompasses the last half of the first round, and while the actual picks have not performed that well, the 16th through 30th best players have still been quality Major Leaguers, showing again that these picks are rather important in building successful teams.

In Tier 6, made up of the competitive balance picks and a portion of the second round, we start to see diminishing returns, and in Tier 7 we see that the actual selections have been more valuable than best players at the same spot. That makes sense, considering the amount of "misses" that occur in the top 60 picks. 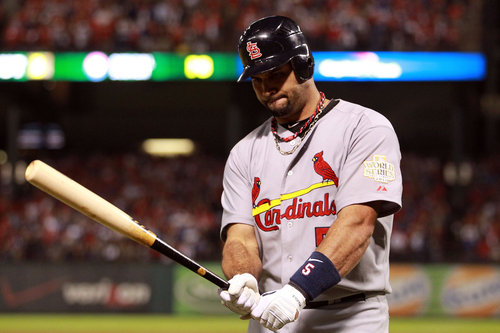 When starting this research, I knew there would be a difference in value, but it's much larger than even I anticipated. Although top draft picks have historically produced a noticeable profit for teams, there still is a ton of value to be had by making better choices. Take the 1999 draft for example - after Josh Hamilton and Josh Beckett went off the board at 1 and 2, picks 3-8 were as follows: Eric Munson, Corey Myers, B.J. Garbe, Josh Girdley, Kyle Snyder, and Bobby Bradley. Four of those players failed to reach the big leagues, and the six players combined for 0.3 fWAR. If any of those teams would have instead selected Barry Zito (9th overall), Ben Sheets (10th), Carl Crawford (52nd), John Lackey (68th), or, of course, Albert Pujols (402nd), it would have changed the fate of their franchises. I realize that sounds a bit dramatic, but in reality Pujols, Lackey, Zito, and Crawford all helped propel their teams to the playoffs (adding even more financial value), while only one of the six teams that passed on them made the playoffs before 2005.

To answer my initial two questions, I think you can look back at the tables and simply use the last two columns. While it may not be an exact measure (and I would love to hear a better way of weighting the two), the average of the historical picks and the best players is the number I would use to value the draft slots. However, I would use more of a range than the exact total because of the inexact nature of fWAR and the market value of wins. So, for example, the value of the top overall pick is presently somewhere between $55 and $65 million. As for the value that they are missing out on, we can simply look back at the difference column, while again estimating a range around that number.

With so much value to be had, are teams at least getting better at identifying the top talent? Below, you can see the trend in the difference between 6-year WAR between the top-100 players and draft picks over the 17 drafts from 1990-2006. 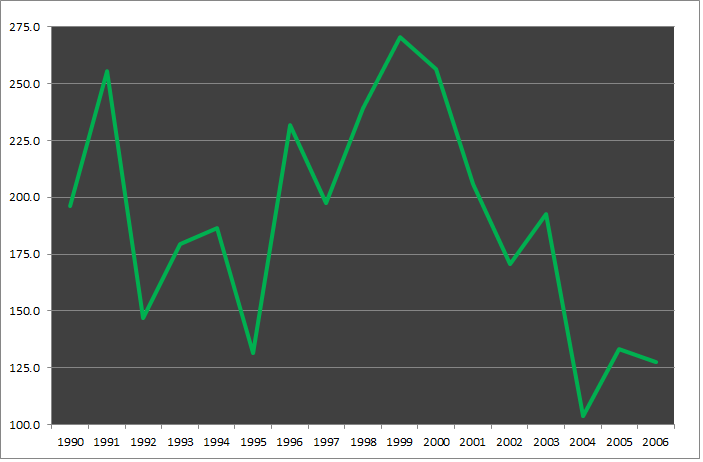 You will notice that since 1999 (which is badly skewed because of Albert Pujols) the gap has been closing, leading me to believe that teams are doing a better job of recognizing top talent. Still, the overall difference is certainly large enough that there is still room for improvement.

So, if teams have real financial incentives to draft quality big leaguers, why don't teams spend a larger portion of their budget on scouting? Especially now that the CBA limits the amount that teams can spend on the actual players, it stands to reason that a potential inefficiency to exploit may be the scouts themselves. If organizations can acquire evaluators that can find these top talents, they will have a competitive advantage. And I think that those individuals exist. Because past scouting reports are not publicly available, examples are few and far between, but they do exist. Jonah Keri's book The Extra 2% featured a chapter on Fernando Arango, the scout that felt that Albert Pujols would hit 40 home runs in the big leagues, and Angels' scout Greg Morhardt rated Mike Trout as a future Hall of Famer when he saw him in 2009. Teams generally pay area scouts anywhere from $35,000-$70,000 a year, and I'd be fascinated to see the results if one team spent significantly more to get top (scouting) talent in those positions. Even if a team paid 30 area scouts $500,000 annually, that $15 million would more than be made up with the first All-Star the organization drafts and develops

As some have already pointed out to me, there is no guarantee that an investement in scouting will truly payoff. Scouting is an inexact science, and it's unrealistic to say that any organization will be 100% right on evaluations because there is too many variables in play. That being said, I can't help looking at the value that teams are leaving on the table and thinking that they should be investing more in making sure the right people are doing the evaluations considering the tangible gains to be had. And, who knows, maybe the follow up to Moneyball or The Extra 2% can tell the story of a small market team that found the new market inefficiency - scouting.

Big thanks to Chris St. John for helping pull data for this piece. You can follow Chris on twitter @StealOfHome.