How a 1991 children's novel prophesied the offensive explosion in baseball while subtly pointing out the fickle nature of the BBWAA's MVP voting.

Share All sharing options for: MVP Runner-Up: A Baseball Novel

Many folks who make their living, or spend unhealthy amounts of their free time, in the baseball world have loved the game since they were children. When we weren't playing little league, we were collecting cards, watching games, or hearing the roar of the crowd in our head as we circled the bases after an imaginary shot to dead-center cleared the wall in game 7.

Some of us, when forced to leave the field at night, merely read about the game, and may have stumbled upon the novel "Rookie" by Jerry B. Jenkins. For those that haven’t read the book, it chronicles the childhood and coming of age of a gifted boy named Elgin Woodell whose father happens to be a drunk, violent ex-big leaguer. The narrative of baseball combined with life and the detail of how it shapes the little things in Elgin’s world as he grows to love the game, despite the darkness his father brings into his and his mother’s life, makes for a moving tale.

While I can’t recommend the book highly enough to those who have a young child, I have some serious problems with the facts presented by Jerry B. Jenkins relating to Elgin’s MLB career. Here is a screen grab from Rookie’s Epilogue that shows some of Elgin’s career statistics and accolades: 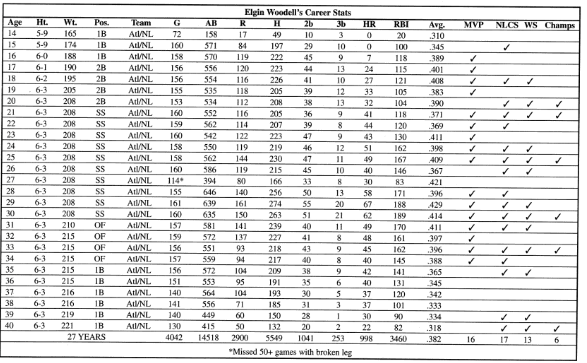 Ok, so these are some small, quibbling problems. Beyond that, we know practically nothing about the teams that Elgin played for during his career. Maybe there was a star player blocking him at SS early in his career, maybe the other infielders in his age 14 season were incredibly accurate and didn’t mind a 5’9" first basemen who had failed to go through puberty. However, we can safely assume some very basic facts about Elgin’s career:

So, utilizing these very simple and safe assumptions, I have expanded Elgin’s batting lines to infer the number of BB’s per season (PA-AB-SF-SAC), and the number of PA’s that would lead to extrapolating his SLG and OBP. The expanded numbers look like this:

Draw your own conclusions and call for your own specific PED testing regimen, but looking at that prolific career, we would expect a fair amount of accolades to be given to Elgin Woodell.

Accordingly, we have the following:

In Elgin’s age 20 season he had won 4 consecutive MVPs and the Cubs won the NL Pennant, he posted this line as a second-basemen:

In Elgin’s age 26 season he had won 5 consecutive MVPs and the Cubs won the NL Pennant, he posted this line as a shortstop:

In Elgin’s age 35 season he had won 7 consecutive MVPs and the Cubs won the NL Pennant, he posted this line as a first-basemen:

In each of the three seasons outlined above, Elgin Woodell hit for average and power and his team won the NL Pennant. He had all the criteria that one could ask for to win an MVP:

Since 1931, when MVP’s were first awarded, exactly 23 seasons have occurred where a player has amassed at least the following in a single-season:

In an odd piece of errata, the strike-shortened 1994 season saw 3 players go 30-100-.350 despite playing less than 115 games. However, since no postseason occurred (and no batting averages regressed), the 3 players have been removed from out data set. Of the remaining 20 seasons, the 10 players who won the MVP also played in the postseason. The 10 players who did not win the MVP also, in a not so surprising coincidence, did not make the postseason.

We are left with a very difficult story to reconcile: how did the world’s greatest baseball player, a sure-fire hall of famer by the age of 24 or so, get passed up for multiple MVP awards despite spectacular statistical seasons that fell during years where he "led" his team to the playoffs?

You could chalk it up to a lazy writer just making it so his protagonist didn’t win EVERY year (this is a human story after-all, so the perception of his performance must also be human).

But, the more obvious answer is that another player had to surpass Woodell by such a substantial margin in raw statistics that the "playoff" factor could not override the statistical gap created by Mystery Player and Elgin. There have been 163 MVP’s awarded since 1931 (One to each league, each season; and Willie Stargell and Keith Hernandez tied in 1979 giving us the odd-numbered total) and out of those 163, 115 played for team’s that made the postseason. There have been 48 players to win the MVP and not make the postseason.

On average, an MVP-winner who misses the postseason needs to hit 7 more HR’s, knock in 21 more runners and bat 22 points higher. In terms of counting stats, that’s a solid month of production, in term's of BBWAA columns that's using the word "clutch" ~38 times depending on the player's upbringing, position and demeanor.

This leads us to extrapolate what the historic seasons that another player in the NL must have posted to beat out Elgin Woodell:

Finally, we know roughly what a guy had to do to beat out the great Elgin Woodell for the MVP. Only problem is that there have only been 13 seasons in the history of the game that saw an OPS of 1.176 or better. The list reads as follows (in chronological order):

A quick look at this list confirms that Elgin was beat out by some epic names and huge seasons. There weren't excellent enough seasons closely bunched with one another until the 90’s and 00’s. Could Elgin Woodell have played against Thomas, Bagwell, McGwire and Bonds? The book was copyrighted in 1991 so it couldn't have been a recounting of past performances. Instead, our only assumption is that Jerry B. Jenkins, author of the Left Behind series and numerous other religious novels, is in fact a baseball prophet and saw the future. He correctly predicted that such fantastic baseball seasons would exist throughout the next 15-20 years that even the incredible fictional seasons by Elgin Woodell paired with postseason appearances would be overshadowed by the likes of Mark McGwire and Barry Bonds.

The steroid debate may rage on, but one thing is for sure: if you want to impress the BBWAA in real-life or in a children's baseball novel, you had better hit a lot of dingers if you play on a crappy team.