This is part two of a two-part BtBS evaluation of Zack Wheeler’s debut. For a more straightforward review, check out Ryan Potter’s piece from earlier today.

Zack Wheeler debuted for the New York Mets last night in the second game of a day-night doubleheader. I made sure to watch closely and evaluate the 6’4" righty as only I can.

But first, I needed to get inside the clubhouse to get a feel for Wheeler’s feel for the big leagues. Here are some points from my pre-game notebook on Wheeler.

Pros
*Brought those small, white-sugar powdered donuts for the clubhouse, an option for rookies but a must-have for a team spending a full day at the park. Showed good command of the clubhouse culture and the desire to be a team-first guy.
*No fungus on his shower shoes.
*Spent the morning talking to coaches and veteran teammates, including going over some hitter tendencies with pitching coach Dan Warthen.

Cons
*Did not stop during warm-ups to grovel at the feet of Chipper Jones.

Overall, Wheeler shows good potential to fit in on the team, a positive for the 23-year old. The transition to the bigs aint easy, and showing the respect and deference to teammates and staff can make that transition easier. 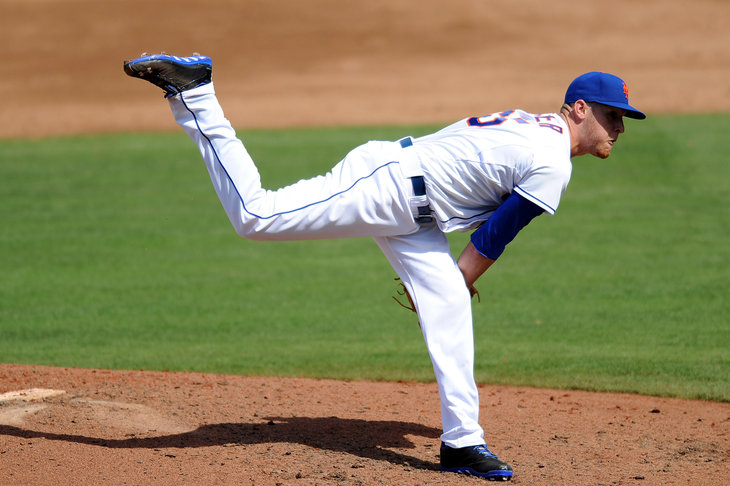 Go here for an actual analysis of Wheeler's start.

Now, on to the actual game.

Before we get into his pitching, though, I wanted to point out that Wheeler went 0-for-3 at the plate with three strikeouts. On the one hand, I love that the kid went up there swinging – it shows a fearlessness that’s necessary to succeed at this level. However, the fact that he failed to put a ball in play shows a limit to his athleticism, and pitchers need to be good athletes to succeed on the bump. Perhaps it was an off day, but the Mets may want to shop the kid to the American League before that hole in his game drags his career down.

As for his performance on the hill, he allowed no runs over his six frames, walking five, striking out seven and allowing four hits. Overall a mixed bag, but let’s look at some pros and cons.

Pros
*Has a good, controlled leg lift. Gathers well at balance point.
*Fastball has late life, explodes to the back half of the plate.
*Consistent release point across all pitches, with similar arm action.
*Missed outside when he missed, rarely missed over the heart of the plate.
*Appreciated the moment after the game; strong relationship with parents.

Cons
*Arm isn’t as loose and free as you’d want.
*Not a lot of horizontal movement on slider.
*Relied too much on fastball late in count; only spotted one pitch over in black when behind.
*Ignored running game, lacks feel for situation management.

And of course, there’s the most important note of all – the Mets won. The kid is clearly a gamer, and he went out and worked around some jitters and control issues. On a double-header day, he went over 100 pitches to give the bullpen a shorter path to the victory without overtaxing them in the second game of the day. That kind of will to win and feel for the day-to-day grind of the game is as important as any out pitch or statistical nugget.

Overall Impression: Impressive debut. Would like to see him grovel at the feet of any legends present at his next game, but otherwise a sterling debut. Shows a lot of potential. Could use more seasoning at Triple-A to work on getting off-speed pitches over and controlling runners. Ready for the show from a make-up stand point.

Note: This was done mostly tongue-in-cheek and should not be taken as a serious scouting report. Follow @BlakeMurphyODC