The Curious Case of Gerrit Cole

Young Gerrit Cole can hit triple digits, but the strikeouts have been notably absent. Is there anything that Cole can glean from Shelby Miller's equally fastball-heavy approach?

Share All sharing options for: The Curious Case of Gerrit Cole

Gerrit Cole is 6'4", 220 pounds, and now leads all MLB starters in average fastball velocity, at 96.3 mph. You know that he was the #1 overall pick in 2011 draft, and had a generally successful, albeit brief, minor league career. People care about getting hitters out and not allowing runs, which contribute to winning. Cole has a 3.75 ERA and 1.17 WHIP in his two starts, with the playoff-seeking Pirates winning both games. He has also yet to walk a batter.

But you can't help but notice that Cole has a grand total of three strikeouts, against 50 batters. He is generating swing and misses at the same rate as Freddy Garcia, whose fastball is nine miles per hour slower, and whose body has occupied Earth for fourteen years longer.

Cole most recently faced the injury-plagued Dodgers, and the only hitter he struck out was Zack Greinke, who sometimes hits baseball players hard, but not often baseballs.

Does this matter? Justin Verlander punched out just 124 batters in 186 innings as a 23 year-old rookie, the same age as Cole. He turned out just fine. But at some point, Cole will need to find a way to translate his electric stuff into missed bats.

A number of articles have already been written on Cole, including this fun one by FanGraph's Jeff Sullivan, taking a look at Gerrit's command. His conclusion:

Cole's control was good on Tuesday night, as evidenced by all the strikes. His command wasn't perfect, but nobody's is, and Cole's stuff comes built-in with margin for error. It's going to be interesting to see how Cole proceeds- whether he keeps pounding the zone, or whether he pitches around it and generates more strikeouts.

I hope fans keep reasonable expectations for Cole; just because Shelby Miller has been so good as a rookie, and Matt Harvey has dominated in his first full season with the Mets, doesn't mean we should assume Cole will excel as well, even if his talent level matches theirs.

Of course, Schoenfield is correct- all players are different. But the comparison with Miller is intriguing. The one knock on Shelby has been his reliance on one pitch, as he is throwing his four-seamer 74% of the time, good for fourth highest among qualified starters. Scouts have raved about his plus curveball, and he flashes a changeup as well, but has hardly needed either of them. A 2.50 FIP and K:BB ratio of 5.0 places him firmly among the best starters in baseball this year.

As Sullivan and Schoenfield allude to, Cole is also leaning on his fastball, throwing it 79% of the time. And Cole's velocity is even higher than Miller's, but their strikeout rates are night and day. Small sample of course, but the elephant in the room is Cole's middling strikeout totals even at AAA this year, with just 47 in 68 innings. This isn't completely new.

So what is the primary difference in their fastball execution? Naturally, let's take a look at their location.

Here is a plot of Cole's pitches in his debut against the Giants:

And then on Sunday against the Dodgers:

I'm not including pitch type to avoid information overload- we've already established that Cole has thrown a ton of fastballs. Notice that almost all of his swinging strikes (yellow) against the Giants were generated in the middle-upper half of the zone, while he barely induced any swinging strikes against the Dodgers. In both starts, he rarely hit the top quadrant or above the zone.

We have to note that Miller simply threw more pitches, with Cole seemingly on an ~80-pitch limit in both starts. Still, Miller lives all around the strike zone, and in particular notches the majority of his swinging strikes in the upper half. This is a theme throughout a number of his starts, including against (for the sake of consistency given Cole's first matchup) the contact-happy Giants:

In that game alone, Miller notched seven swinging strikes at or above the top quadrant, more than the amount of total pitches Cole located in those zones in his start against San Francisco.

To summarize, on their seasons to date, observe: 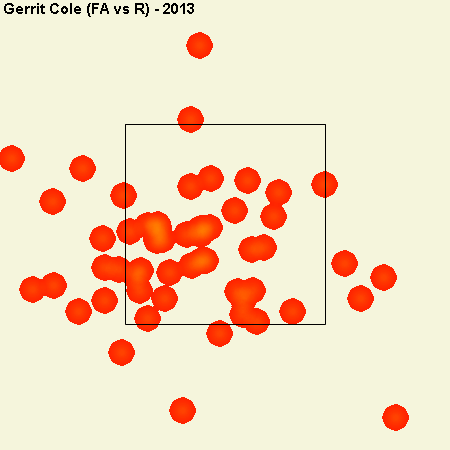 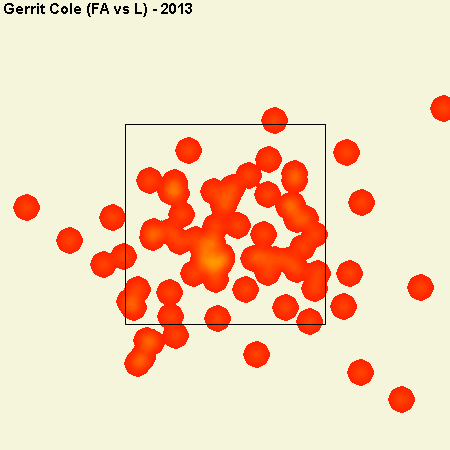 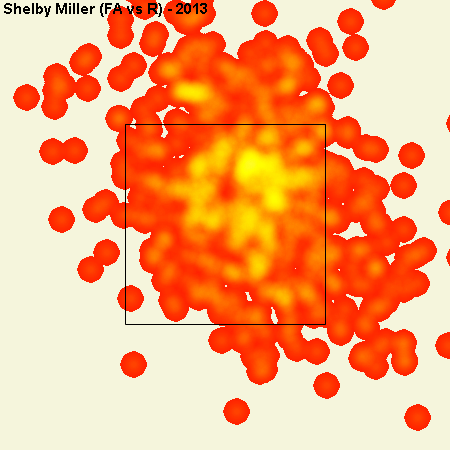 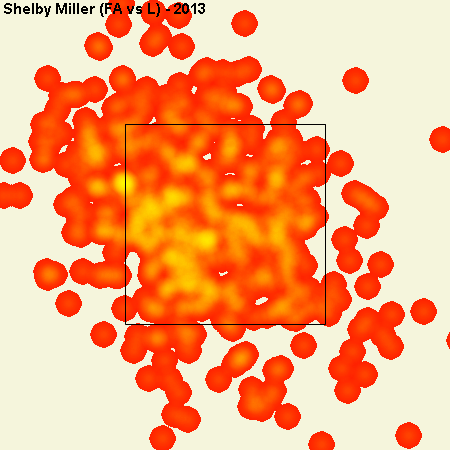 Yes, Miller has thrown more pitches, so he has dots everywhere compared to Cole. But it's clear that Miller likes attacking up and in to righties, and from the eye test his fastball has a good amount of natural run to it. Cole's is a bit more straight, and while I'm sure that's a huge factor on generating more misses, there's also a three mile-per-hour difference to account for. Maybe Miller's delivery is deceiving hitters, but it looks fairly straightforward to me.

We're analyzing two starts, while Cole has his entire career ahead of him to figure this out. Usually when a flame-throwing top prospect is called up to the big leagues, we worry about his efficiency. Instead, you might confuse Cole's lines with those of Kyle Lohse.

Of course, it's absolutely a positive that Cole is showing great control. Ironically, perhaps the best recent example of a prospect with no idea how to throw a strike is Cole's former UCLA teammate, Trevor Bauer. Bauer has publicly expressed his disdain for contact, and affinity for the elevated fastball:

Can SOMEONE explain to me why fastballs down in the zone are so revered? I don't get it. But baseball is obsessed with fastballs down...why?

The last thing Cole should be doing is walking six guys a start, as Bauer has done during his time in the majors. Still, while Bauer's views may be on one extreme, there is some credence to his point - BABIPs are higher on ground balls, which typically are generated by pitches down in the zone. It goes without saying that strikeout rates are critical to a pitcher's long-term success.

Cole has a fastball that plays anywhere in the zone, and, as Sullivan notes, his velocity allows for a wide margin for error. Even if he walks a couple more batters, it's worth testing the limits of their plate discipline, especially now that he's established his ability to pour in strikes at high clips.

Obviously, the development of Cole's slider and changeup will be integral to his strikeout rate. But Shelby Miller isn't the first pitcher to show you can still dominate while relying heavily on a great fastball.

Cole's fastball velocity is better than great. It's time to experiment further with his location now.

Statistics and images courtesy of FanGraphs and Brooks Baseball.

Andrew is a contributor to Beyond the Box Score. Follow him @AndrewShen_SF.