Phil Hughes was Baseball America's #4 prospect headed into the 2007 season. Sometimes, he lives up to that billing. Other days, he's serving up home runs at league-high rates. What explains this extreme variance in performance?

Share All sharing options for: Phil Hughes: Baseball's own "Jekyll and Hyde"

On May 15 of this year, Phil Hughes had the worst outing of his six-year career, against the Seattle Mariners: two outs recorded, eight baserunners, seven earned runs, no strikeouts. Three weeks later, he took the mound at Safeco Field and shut down the same Mariners: seven innings, five baserunners, no earned runs, seven strikeouts.

The ups and downs of Phil Hughes’s tenure as a Yankee are almost legendary in the Bronx now. The highly touted Yankee farm product has never become the steady arm he was supposed to be, instead mixing glimpses of great potential with bouts of home run derby. Having watched Hughes for years now, I decided it was time to dissect what makes him such an unpredictable pitcher.

Others have set out to answer this same question, including recently the Pinstripe Pundits. Drawing on a few starts from this season, the conclusion in that article was that a great deal of Hughes’s success hinged upon mechanical consistency when throwing his fastball. I’m going to broaden the study to the beginning of the 2012 season and look at a number of possible answers. Slowly, I’ll narrow down the problem areas and identify the real problem area(s).

The first task was to separate Hughes’s starts into clearly defined "good" and "bad" samples, to best construct anatomies of each. I used Game Score as a quick and simple method, by excluding all starts since 2012 in which his score was between 36 and 64—roughly speaking, average starts. That leaves us with 12 "bad" starts and 10 "good" starts.

[Editor's note: All stats are taken prior to Hughes' 6/12 start]

Next, I wanted to verify that Game Score was giving us two samples with drastically different outcomes. Here are some stats from each sample to demonstrate the extreme bipolarity.

So, armed with two clearly distinct samples, I made a number of statistical comparisons to try to identify some problem areas. First, let’s have a look at some indicators of pure wildness—the inability to throw strikes.

Broadly speaking, control is an issue we can rule out as a source of Hughes’s irregularity. It’s not like some days he gets up and can’t throw a strike. That means there must be something different happening on pitches in the strike zone—as the next comparisons will demonstrate.

Simply put, guys are making contact much more often in Hughes’s bad starts—and when they do, they’re squaring the ball up and hitting it solidly. That must mean there’s something different about the strikes Hughes is throwing. Something about his pitch selection, velocity, movement, mechanics, and/or location is distinctive when he’s pitching well.

Speed is likely not the issue. His average fastball has actually been a hair slower in his good starts (92.7 mph) than in his bad ones (92.9 mph). The same was true for his curveball, slider, and changeup. There also wasn’t much variation in his pitch selection, with his fastball being used about 65% of the time, the curve a distant second, and the slider and change playing supporting roles. (Hughes’s repertoire has evolved even since the beginning of the 2012 season. His slider, which he started using in mid-2012, has been much more useful than his old cutter. Still, there have been some dreadful outings since he developed the slider. Pitch selection is not the main source of concern.)

Hughes’s fastball ought to be the focus of attention from here. It’s appropriate at this point to look a little more in depth at the argument brought forth by Derek Albin at Pinstripe Pundits. Hughes was quoted just a few weeks ago on the topic of his fastball command, saying:

"I felt like I was maybe on the side of the ball a little bit, which tends (to cause) my fastball to come back over the middle of the plate," Hughes said. "My bullpen, I tried to focus on staying behind the baseball and continue to stay aggressive."

Then Derek tested this idea by looking at Hughes’s release points and fastball spin deflection as measured by PITCHf/x over a few up-and-down starts in May. Derek found a strong relationship:

It’s pretty obvious that his arm slot has been all over the place, but it looks like he got on top of the ball a little bit more last night. It’s also evident that his release point took a dip during his two recent poor performances. … With the lower release point and not getting behind the ball, Hughes is generating more movement to the left from the catcher’s perspective.

The methodology is perfect on paper, but in reality it’s not fool-proof. For one thing, PITCHf/x release points are inferred, not observed. Also, PITCHf/x starts tracking the ball 50 feet from home plate, but pitchers usually release the ball closer to 55 feet away. Still complicating matters, some stadiums’ PITCHf/x systems have slight biases in speed and spin deflection measurements, making apples-to-apples comparisons difficult. In particular, Kansas City’s Kauffman Stadium, the source of one of the graphs in Derek’s piece, has been somewhat of an outlier for a while. An ideal comparison would therefore be between starts in the same stadium in the same year.

Luckily, such a comparison exists. Hughes’s best start of this year so far (May 4 vs. Oakland) and two worst (May 15 vs. Seattle, April 13 vs. Baltimore) were all in Yankee Stadium. This should give us a slightly better idea of whether he’s being inconsistent mechanically and whether it’s having an effect on his fastball’s movement and/or location.

Below is a graph of the release points (back-calculated to 55 feet—still approximate, but a better guess) from his "good" start, in blue, and the "bad" starts, in red. I also included color-coded linear trend lines to help illustrate the spread. 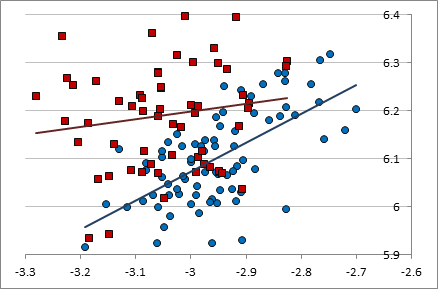 As you can see, in his good start he restricted his fastball release point to a consistent band of spots. When his arm dropped, it also went wider, meaning he had about the same amount of extension at release point on every pitch. In contrast, his bad starts show a complete lack of consistency with his release. Instead of a diagonal band, there’s a noisy splatter of data points. No wonder he feels so lost in those bad starts. 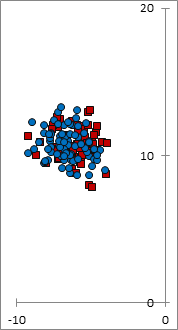 Derek looked at the PITCHf/x data and concluded that release point inconsistency was also affecting the spin deflection of his fastball. On this point, I disagree. Check the graph to the left.

As you can see, there’s not a whole lot of difference in spin deflection. The fastballs from the good start are maybe a little more tightly clustered, but there’s no evidence of consistently more or less backspin or sidespin. (This is a subjective judgment; feel free to disagree with me.)

More likely, the irregularity of Hughes’s fastball release points in his bad starts results in location mistakes and/or a loss of deception in his delivery. Loss of deception is impossible to measure using PITCHf/x, so we’ll have to settle with pitch location. Below are heat maps of the fastball locations from all of Hughes’s good and bad starts. (The strike zones are not standardized; they are averaged.) 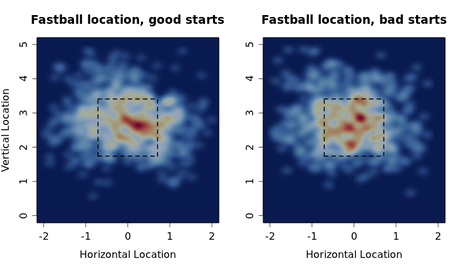 I think it would be fair to say that these graphs do not show identical patterns. Hughes throws too many strikes with the fastball in his bad starts. He does not hit the outside corner often at all, instead leaking heavily to the arm side and leaving the ball out over the center of the plate. In Hughes's good starts, there are more pitches at the edges of the zones rather than in a large column over the middle of the plate. It also is consistent with Hughes's own diagnosis, which is that a glitch in his mechanics causes his fastball to centrally locate.

Hughes is about to turn 27. He is a free agent at the end of this season. He can make himself some big bucks if he proves to the Yankees (or another team) that his good side is here to stay. But if no amount of bullpen training can get him to correct his mechanical flaws—or if that's not even the reason for his shaky fastball command—then he'll probably never be better than a league-average pitcher.

Big thanks are owed to MLB and Sportvision for the PITCHf/x data, and to Harry Pavlidis for the manual pitch labels.