If Only The Padres Could Pitch

Teams have separated themselves into great, good, average, below average, and bad. The Padres fall towards the latter end of the scale, but it isn't due to their usual lack of hitting production.

Share All sharing options for: If Only The Padres Could Pitch

In 2007, then Angels pitching coach Bud Black became a Major League manager. Black moved south from Los Angeles, taking over as the manager of the San Diego Padres. The Padres previous manager, Bruce Bochy took the geographically opposite approach of Black, moving north to San Francisco, to manage the San Francisco Giants. Since that time, Bochy has gone on to win 2 World Series with the Giants, most recently in 2012.

Read More On the Padres 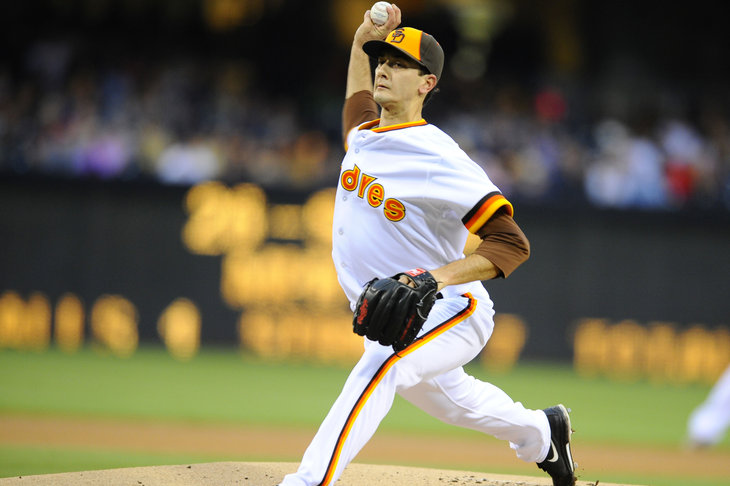 The switch seems odd now, as Bochy had spear headed the Padres to back-to-back NL West titles in 2005 and 2006, failing both years to make it past the divisional round. Bochy still holds the record for most seasons managing the Padres at 11. Bud Black has remained at the helm of the Friars since joining the team in 2007, but he has yet to do what Bochy accomplished 4 times in during his tenure, which is to make it to the post season.

The 2013 Padres find themselves in another hotly contested NL West. Many saw the Dodgers as the favorite to make the playoffs out of the west, but as of now, LA has a 22-30 record, and find themselves 7.5 games behind the first place Diamondbacks. The division sports three teams with winning records, the Dbacks in 1st, the Giants in 2nd, and the Rockies in 3rd have all played above .500, leaving 4th place San Diego and last place Los Angeles with the lone losing records.

Still, the season has only recently reached the one quarter mark, which implies there is much more baseball to play. This is usually the point in the article in which the writer reminds the readers of the teams that have recently begun the season with a losing record only to come back and win down the stretch to unthinkably make the postseason. In lieu of such commonplace anecdotes, the reminder of such a statement will have to suffice. The Padres have won 24 games and lost 29, and thus far that record supports their play on the field since their Pythagorean win/loss record also stands at 24-29.

This record puts the Padres in the same boat as the Twins, Angels, White Sox, Mets, and Phillies. These teams hover just below the line of demarcation, the .500 mark, but due to flat out lacking in certain areas, have had difficulties climbing above said line. So, what's caused San Diego to stumble, or put another alliterate way, what has been the plight of the Padres?

From a hitting standpoint the Padres have been somewhat impressive. This constitutes odd as the Padres home venue, Petco Park, has been known the baseball world round as a pitchers park due to it's expansive nature. Recently, the Padres moved in some of the fences in the hopes that the stadium might become less a pitchers park. Thus far in 2013 Petco has been more homerun friendly, but still remains one of the more difficult parks in which to score runs.

Up to this point in the 2013 season, the Padres rank tied for 13th in Major League Baseball in wRC+ at 100. That marks stands ahead of the Rockies, Nationals, Yankees, and the NL West division leading Diamondbacks. The Padres rank near to last in the league in ISO, barely better in SLG%, and only 18th in the league in OBP. So what has made the Padres offense formidable enough to garner a 100 wRC+? Two major factors, the first being base running and the second being timely hitting. I recently published a piece on the St. Louis Cardinals concerning their incredible hitting numbers with runners in scoring position, and if the Cardinals are the kings of hitting with runners in scoring position, the Padres are the Dukes, or some other title of royalty of lesser stature.

The Padres have been, what many like to describe as clutch. Offensively the Padres have been better than the league average, but even more so with runners in scoring position. The Padres other offensive strength has been on the base paths. The Friars, led by breakout shortstop Everth Cabrera (19 stolen bases and a 3.1 BsR), Chris Denorfia (5 steals and a 1.7 BsR), and Will Venable (8 steals and a .7 BsR). When the Padres reach base they make the best of their speed and base runner acumen to get into scoring position, so Headly, Quentin, and Alonso see more fastballs, and thus drive in runs when they get their hits.

Just for comparison's sake, the Royals have an above average pitching staff, but due to an 84 team wRC+ also have a sub .500 record. The Padres probably don't have a roster to make the playoffs, and no one expects them to do so in 2013. Still, if the team can keep Chase Headley and find better pitchers than Edinson Volquez, Eric Stults, and Jason Marquis, make the Padres a team to watch. The season is still young, and the Friars may look very different both in a roster sense and a statistical sense at the end of 2013, but as of now, this seems like a team that just can't pitch well enough.