In 2009, Mark Reynolds smashed 44 homeruns and accumulated 3.2 fWAR with Arizona. After a few disappointing years in Baltimore, the slugger is off to a blazing hot start in Cleveland. Is his production sustainable?

Share All sharing options for: Mark Reynolds' Hot Start Looks To Be Legitimate

Mark Reynolds ranks 17th in all of baseball with a .412 wOBA and it's May 7th. Right now, his batting line sits at .300/.376/.650. Yesterday, he mashed a towering homerun off of Jarrod Parker, bringing his total to 10 in only 117 PA on the young season. We've been accustomed to his power but the high average is something of a surprise. So far, Reynolds has accumulated 1.2 fWAR and has made Cleveland's 1 year/$6 million investment look like an absolute steal. Can he keep up this torrid pace?

Well, right now, Reynolds is on pace to hit 53 dingers. Likely, that's not going to happen, but, at this point, it's safe to say he's going to top his 2012 total of 23. The average true distance of his 10 homeruns is 420.8 feet, over 20 feet more than the normal MLB homerun. His isolated power is currently sitting at .350 with a 26.5% HR/FB rate. While this all may be considered regression potential considering the small sample size of only 117 PA, it's interesting to note the similarities and differences between the pitches Reynolds has seen, plate discipline and batted ball tendencies in 2013 compared to his 127 wRC+ season in 2009 with the Diamondbacks.

Early-Season Regression Candidates Are In! 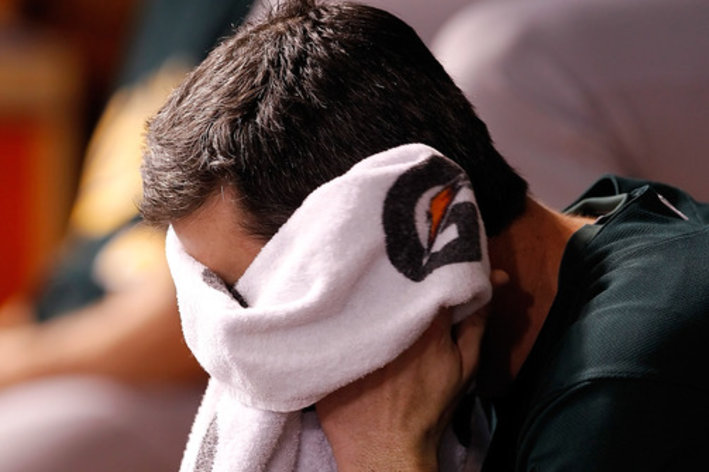 Mark Reynolds may be off to a hot start but a couple of pitchers have struggled out of the gate. Some have been more unfortunate than others and are due in for some improvement after their disappointing opening month.

At his best that year, Reynolds finished with a 3.2 fWAR, .381 wOBA and 44 homers. The average true distance of his homers that year were 419.5 feet with a 26% HR/FB rate. Needless to say, Reynolds was strong, posting the 5th highest ISO in baseball that year with .284. According to PITCHf/x, much of his success could be contributed to the fact that he saw 50.8% four seam fastballs, which he hit for 17.5 runs above average. Ever since then, Reynolds has not seen over 39% four seamers, bottoming out at 30.3% so far in 2013. In its place have been more two seam fastballs, cutters and changeups. He's no longer getting those heaters to smash into the stands like he used to but he's finding a way to succeed.

In 2013, Reynolds' O-Contact% is 55.4%, only 7.5% below league average. Albeit in a much smaller sample size, his contact% is up to 68.6% this year, the highest it has ever been in his career. Much of the jump in average and homeruns can be attributed to his ability to make more contact than usual, especially with his trademark power.

Reynolds is sporting very similar batted ball tendencies from his breakout 2009 season right now. His 2013 line drive, ground ball and fly ball percentages are all within 1.4% of their 2009 rates. Keep in mind, with those batted ball rates, Reynolds posted a .260/.349/.543 slash line, much lower than his aforementioned .300/.376/.650 in 2013. His current BABIP is .303 so the average doesn't seem to be luck induced. These peripherals are helping Reynolds keep it afloat but there has to be more. In fact, he is currently striking out at the lowest rate of his career at 23.9% compared to 33.7% in 2009.

There isn't a projection system on Fangraphs that has Reynolds batting over .237 or striking out less than 28.4% of the time in 2013. Boosted by an almost average contact% and an uncharacteristically low strikeout rate, Reynolds has definitely exceeded expectations. Whether he will be able to maintain this rate of contact remains to be seen. His strikeouts may rise as his O-Contact% whittles closer to his career average but Reynolds has a good shot at reproducing his 2009 production.