The Hardest Thing To Do In Sports: Hitting A Baseball (When You're A Pitcher)

With the days of pitchers hitting maybe — or maybe not — numbered, let's look at what we might see from pitchers over the next few years.

Share All sharing options for: The Hardest Thing To Do In Sports: Hitting A Baseball (When You're A Pitcher)

In an 1986 essay entitled, "The DH: On the Other Hand..." George Will describes the amusing at bat of Red Sox pitcher Bruce Hurst. Because the game was held in Shea Stadium, Hurst would have to bat.

It was his first at bat in eons. The spectacle was so ludicrous that the home plate umpire laughed...Having struck out his first two trips to the plate, on his trip toward his third strikeout Hurst said defiantly: "I'm serious!" And the umpire cracked up.

Pitchers hitting has long been a source of amusement and consternation for fans. It eventually got to be so amusing/embarrassing that the American League decided to add in the DH to save their pitchers from more ignominious at bats. Okay, so maybe that wasn't the real reason, but it still served that purpose.

Will notes that the existence of the DH faces the fact that pitchers mostly go through the motions when at bat.

Without the DH, every ninth batter is unserious. A pitcher hitting is like the shortstop pitching. Baseball doesn't an unserious pitcher — say, the shortstop — to pitch to one of every nine batters on the opposing team.

When and if the DH is coming to the National League is a topic of some speculation. Bud Selig seems to be a little split on the subject. While he likes the DH rule, he also isn't sure about implementing it in both leagues. In fact, he plans on leaving the rule the way it is until he retires.

Either way, whether the DH comes to National League parks near you or it stays an American League institution, it's worthwhile to take a look back into archives to see a little about how the offense of pitchers has evolved. In addition, if the pitcher continue to hit in the National League, what types of numbers could we see?

James Gentile did an excellent piece on the history of pitchers hitting about 4 months ago. So I'm going to continue on from that to project potential pitcher's hitting statistics, or at least the population curve, through 2026 (If hitting pitchers last that long).

As a side note to all the math people wanting to mess with this, all models were fit through nonparametric linear splines. All derivative estimates, in order to assess rate of change and look for change-points, were done by the standard methods for nonparametric regression.

First of all, let's get the fact out of the way that pitchers have always been terrible hitters. However, it hasn't always been as bad as they currently are. Granted, we're talking .235 wOBAs compared to .162, but that's still 47.9% better.

The Early Days were mostly characterized by a cyclic pattern, with the three sub-eras being from 1900-1915, 1916-1934, and 1935-1951. There's a slight downward trend over that time, but the pattern is clear. Initially, we saw a lot of pitchers spending time in the field as well as the mound but this practice died out by the mid '20s. The high point of pitcher offense came around 1921-1928.

Something happened starting in 1952. I don't know what it was, but most all the derivatives of the fits indicate a strong negative (In a baseball sense) change in the direction of the statistics. wOBA and OBP start a large downward dive, while K% goes on the rise.

What changed? Darned if I know. Maybe pitchers stopped taking batting practice. Maybe they stopped caring about hitting. Maybe new commissioner Ford Frick wanted Babe Ruth to continue to have the greatest hitting season by a pitcher ever (By wRC+), and decided to institute a rule to keep pitchers down. Either way, there's no denying the change had taken place. Pitcher hitting would continue to decline until 1968.

After the dream year on the mound for pitchers, baseball made a few rules changes. They lowered the mound 5 inches and shrunk the strike zone to help increase offense. From the normal batter's perspective, it worked reasonably well. However, for pitchers at the plate, things returned to the cycle seen in the Early Days. The only difference was that they were now operating at a lower level.

There is definite difficulty in projecting a pitcher's offensive season based on the previous years. The absolute value of correlation from season to season for each pitcher is incredibly low. This is highly driven by relatively small sample size, but that's unavoidable. Pitchers will not be earning more at bats any time soon, so anyone wanting to look at pitcher hitting will need to work will smaller sample sizes (Might I suggest the Bayesian Paradigm with strongly informed priors).

However, this doesn't mean that we cannot project the general trend of the population over future years. Let's start with wOBA. First of all, I think it's fair to say that we'll stay in the plateau that we've seen since 1969. I don't foresee a shock to the system like we saw in 1952. Finally, the slight downward trend seen since 1969 may continue for a short while, but will very soon bottom out.

Further, as Ryan Potter recently noted, baseball is a cyclical game. This is decidedly clear with pitcher offensive statistics. It seems that, in the Modern Era, roughly every 10 years, the trends take a turn. Every 20 years, a new cycle begins. Right now, pitcher hitting is in the trough of the latest cycle. Based on past data, there's reason to believe that a slight upswing should be due. So now, our projection forward for the fit of wOBA, along with a possible representative sample, could look like this. 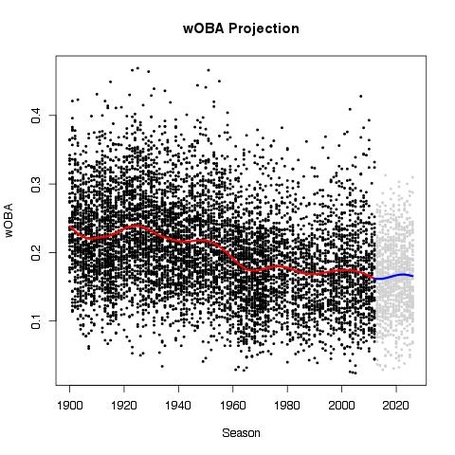 OBP has a highly similar structure, which isn't surprising. The projection therefore will look very similar to that of wOBA. 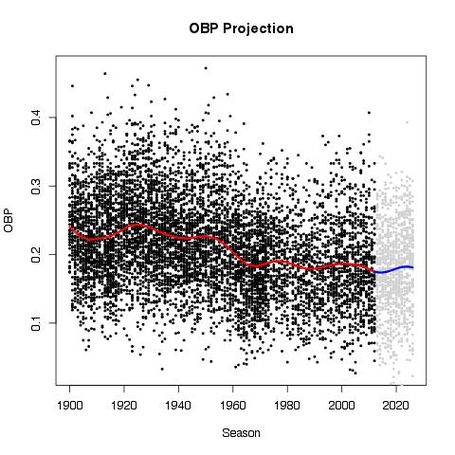 The final stat I'm going to try to project forward is K%. ISO and wRC+ aren't as interesting of projections. For the sake of visual, here are the fits for ISO and wRC+. 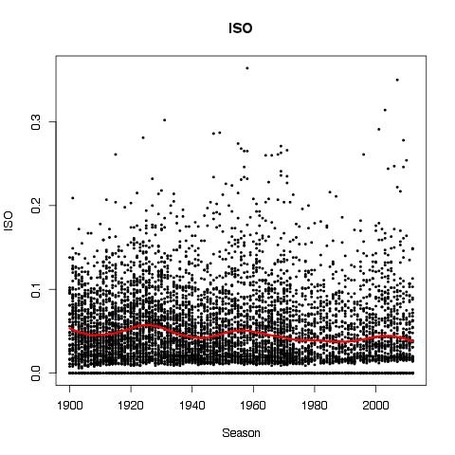 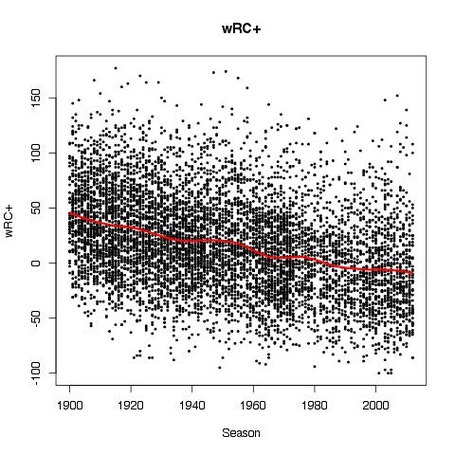 But back to K%. This is a more difficult projection to make, mainly because we really don't know where it could stop. It could conceivably increase until the fit of K% reaches 90% and higher, but this is decidedly unlikely. Much more likely is that K% will reach a certain plateau level and then cycle around that value. But what that value will be is unknown. Even though James Gentile has discussed the increase in called strikes and strikeouts, I think that pitchers K% may be approaching the plateau. However, I don't expect it to reach that level (My projection is around 40%) for around 10 years. 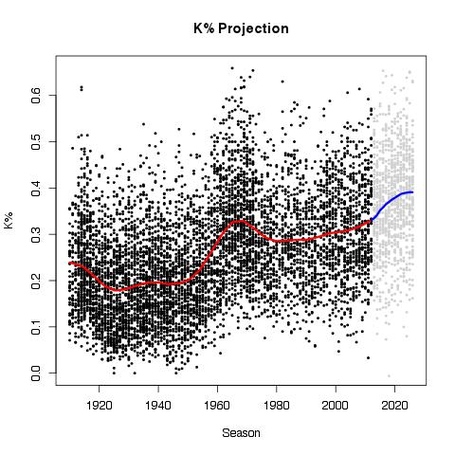 So this is where we are at with pitchers' offensive statistics. Things may have finally reached their plateau level, and I think they're likely to stay there for a long time. That is, unless baseball decides to have the shortstop take to the mound when pitchers come to the plate.

Fun Random Stuff Found: In searching, I found a few statistics/oddities that I found amusing that I figured I'd report here.