How can we quantify the goosebumps we get from deep home runs down the line?

The first thing I did with ESPN Home Run Tracker data was calculate a statistic called home run damage (HRD). I particularly enjoy it, but it posts some tricky results. Home runs to center field are more damaging (longer and faster) than home runs down the line, but it doesn't "feel" that way. Some four-baggers are perceived more damaging than they really are.

We see an example of this with a recent blast by Edwin Encarnacion to the upper deck in Rogers Centre. According to the heartless data it was worth 3.13 HRD, good for 1,533th since 2006. However, it just seems like a great knock because it reached all of the upper decks. MLB.com even calls it a moonshot! That is slightly misleading, since the moon is 238,900 miles away and this home run was only 427 feet. What can we do to give these incredible looking home runs their due, while understanding that they were not actually hit that far? Well you may have heard of depth perception, but I'd like to introduce you to a new concept called Home Run Perception.

*What is up with Encarnacion's chicken wing right arm? What an interesting home run trot.

The basic idea behind this attempt to calculate which home runs are perceived as being longer than they really are is how their distance compares with the distance between home plate and the wall they flew over. Since this is all about perception, I'll be using true distance in the calculation. It doesn't matter how fast the wind was or how hot the day was. If we see the ball fly 500 feet, so be it.

However, there is something to apex as well. Even if a big fly is slightly shorter, it seems longer if it hits a higher deck. It would be much better to use the height at which the ball actually landed instead of using the highest apex in flight; however, I don't have that data and will have to go this way instead.

The next step was to actually find the dimension of the wall where the home run exited the park. Enter Seamheads again. I matched each of their dimensions with my angle buckets as best as I could. Not every park had every dimension for every field, so I used average values from known dimensions to come up with an estimate. Here is a reminder of what I named each bucket of exit angles, graphed in such a way to show where they relate to each other on an actual field. I also included the total percentage of all home runs hit to each angle. 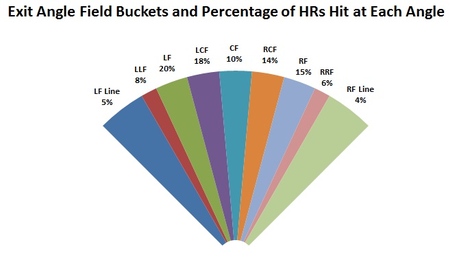 The final piece of the perception puzzle is not how long it flew, but how high. A fourth-deck home run just feels longer than a home run that flies a similar distance but lands in lower-level seats. My solution to this was to multiply the apex by feet past the fence and divide by 100. A home run needs to be both way past the fence and land high in the stands to be perceived as extra long, so this solves both of those problems. Again, I would love to use the actual landing height here, but don't have those numbers.

Finally, I add the distance past the fence and the apex adjustment together for a total Home Run Perception score:

The home run with the highest perception score is Mark Reynolds' upper deck blast at Chase Field in 2010. It would have landed at ground level a full 153 feet beyond the left field fence and gained 150 apex points for having a slightly above average maximum height of 98 feet.

The home run with the lowest perception score is Eric Hinske's near fly out down the right field line. His perception value is actually a negative number, since the exit angle of this home run was to straight right field. Had it not curved quite as much, it would not have even gone over the fence. His apex score is negative as well, even though the ball did get to a very high maximum height of 126 feet. This feels right, as the high apex gives the idea that this was truly a pop fly that just snuck over the wall.

The next fun result to play with is to correlate HRD and Perception and create a residual. Based on the perception score of each home run, what should the HRD be?

The home run with the largest difference between expected and actual HRD is Garret Jones's ding dong on April 5, 2010. He hit a home run out of the park and into the Alleghany River, but it would have been a pop fly on a day where the wind wasn't blowing out like crazy. It had a perception score of 36, leading to an expected HRD of -0.31. However, the fact that the wind pushed it out so much and that it came off the bat so slowly led to an actual HRD of -7.97.

Manny Ramirez is on the flip side of this discussion. His home run on May 7, 2008 just barely cleared the center field wall in Detroit. That wall is 420 feet away from home plate. The perception score of this home run was a measly 30, leading to an expected HRD of -0.48. Compare this to the actual HRD of 4.02.

If we look at a different point of view, what home runs do we find with a high perception but low HRD?

The previously mentioned Ramirez "Just Enough" home run to center field in Detroit is the most damaging home run with the worst perception, but just to even things out, here is the second worst perceived home run with at least 4 HRD, Bryce Harper to deep right field versus the Mets (4.00 HRD, 40 Perception Value). This was a line drive with good distance (423 feet) and a lot of speed (117.1 mph), but still just squeaked over the fence. Its low apex also contributed to its low perception value.

What I have attempted to accomplish here was to use numbers to ruin any fun you may have had watching major league hitters go yard. I trust I was successful in that endeavor.

Our brains can't separate home run trajectories from their surroundings and especially have a difficult time understanding that they fall in a much shorter distance than they rise. Both of these reasons are why we get so excited about a 500-level fly down the line but nearly ignore a wall-scraping laser to center field, despite the latter actually being more impressive.

Ahhh who cares about all that psychological junk when your time would be better spent watching Travis Hafner Place a Restaurant On Notice in Kauffman?