Shark's in the Water: Samardzija Emerges

A little over a year ago, the hope in Chicago was that Jeff Samardzija would develop into a nice middle-of-the-rotation starter. A year later, the new question is: can he be an ace?

Share All sharing options for: Shark's in the Water: Samardzija Emerges

Let's turn back the clock to 2006 where Jeff Samardzija is a two sport standout at Notre Dame. As a wide receiver and a pitcher, "Shark" was a projected first round pick in multiple sports, which is something that doesn't happen too often for college athletes. Going into the drafts for both leagues, Shark faced a very important and difficult question: should he go to the NFL where the guaranteed money is big and he makes a near-immediate impact, or should he take the risk and head for MLB where his debut in the league will be delayed? Because of this question, MLB teams were faced with the risk that they would draft him and he would later choose the NFL, thus resulting in the loss of a pick. Come time for the draft, Samardzija fell all the way to the 149th overall pick to the Chicago Cubs.

The decision was not viewed favorably by everyone. After all, in a piece from Sports Illustrated, Samardzija was noted as having "first-round potential" in the NFL draft. Using numbers from www.sportrac.com, I calculated the average total contract of a first-round pick in the 2007 NFL draft to be $21,133,869. This earning potential--that comes with near immediate playing time in many cases--certainly beats the 5 year, $10 million contract Shark signed with the Cubs.

At this point, I don't think too many people are questioning the decision anymore. In his most recent start against the cross-town White Sox, Shark threw a two-hit complete game shutout with eight strikeouts and only 2 walks. In fact, over his last three starts, Shark has totaled 24 IP, 3 ER, 23 K, 5 BB while only surrendering ten total hits. To figure out where this dominance is coming from, it's important to backtrack just a bit.

Every player has his peaks and valleys, and the valleys for Jeff Samardzija in the minor leagues were rather deep. After being ranked #80 on Baseball America's prospect list the year before, Shark did not appear on the 2008 list. While in the minors, Shark really struggled with his command and control. He failed to miss bats and frequently missed the zone, which helped lead to a 6.3 K/9 and 3.9 BB/9. His final tally from the minor leagues appears as so:

Hardly a line that is going to get people excited.

Adjustments take time, and things were no different for Samardzija. In his first three years in the majors--where he worked out of the bullpen--Samardzija managed only a -0.4 fWAR in 81.2 IP, which really had doubters questioning why he chose to play baseball.

Then, in 2011, it was like someone had finally turned the light on. Shark made 75 appearances in the 2011 season and flashed moments of absolute dominance. Suddenly, his strikeouts started to show up as he fanned 8.9 batters per nine innings. The performance showed so much promise, in fact, that the Cubs decided to make a leap of faith and convert Shark into a starter.

Boy has that decision paid off.

Emergence as a Starter

Read More About Smardzija at Fangraphs

The evolution of Shark from a pup into a hitter-eating machine begins with the emergence of his velocity. According to PITCHf/x, Samardzija had a devil of a time with velocity in his early years in the majors--even as a reliever. Rather than flashing the high-90's fastball that many had raved about going into the draft, Shark's fastball averaged under 94 MPH. Since the beginning of that fateful 2011 campaign, Shark's fastball is averaging almost exactly 95 MPH, which is closer to what was advertised when he came into the draft.

The second major component of Samardzija's emergence has been the frequency and consistency of his slider. Back in 2008, Shark only threw his slider 10.5% of the time, and only built it up to 17.2% of the time in 2010. In 2011, he cranked the frequency up to 23.6% of the time, and his results improved mightily. Going by pitch values on Fangraphs, Shark's slider jumped to 5.6 runs in 2011 versus the combined -0.5 runs it had provided in his first three seasons. However, the slider didn't come along simply because he started throwing it more. Sometime between 2010 and 2012, Shark changed his release point by quite a bit: 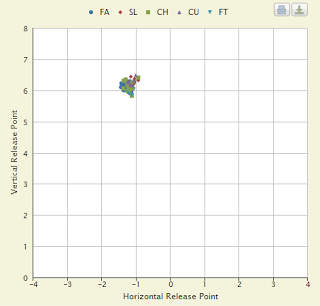 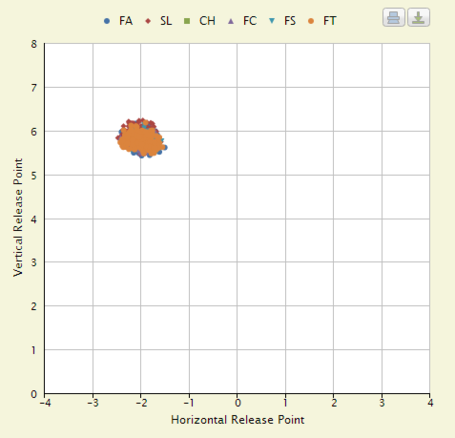 The difference between the two points is quite interesting. It appears that Shark has gone away from his over-the-top release and is now releasing further away from his body. The big difference in releases causes changes in the angle of perception of the hitter, can impact how the ball is released--thus changing RPM on the ball and velocity/break--and might just be easier for him to repeat. It's not just the change in release point, either. The spread here is very small, which suggests he's repeating the motion very well.

For comparison's sake, Justin Verlander had a similar spread on his release to what Samardzija has over the past two years. In fact, the two pitchers release out of nearly identical horizontal slots, with Verlander releasing from higher on the vertical axis. The data shows that it has improved Shark's velocity, and it certainly has helped him rack up more strikeouts and pitch at a higher level.

In 2012, everything came together for Shark. His slider kept its status as a plus pitch by posting 5.2 runs in value, and the increased velocity on his splitter--clocked at 86 MPH on average--helped him rack up 11.6 runs with the pitch. One stat I love to use when looking at pitchers is O-Swing%, and Shark's improvement in the category is promising. Before the increase in velocity and increase in use of his slider, Shark's O-Swing% was only reaching 23-24%. In 2012, that number shot up to 34.2%, which was 9th best in the league.

The combination of the change in release point and use of pitches has impacted Shark's swing-and-miss numbers as well. His SwStr% has jumped from sitting between 5.5 and 7.4% in his early days to a staggering 12.1% in 2012, which was good for 5th in all of baseball among starters.

The emergence of Jeff Samardzija as one of the best power pitchers in the league is not a fluke, nor is it something to take lightly. If he can continue the new found consistency in his new release point, there doesn't appear to be much of a reason to think he will fall off. His slider and splitter are both very strong pitches, and pairing them with a high-90's heater is an arsenal that nobody wants to deal with. From this point on, it's reasonable to assume that Shark is here to stay as one of the league's better power pitchers.