Share All sharing options for: Taking a look at Kevin Gausman's first start

The Baltimore Orioles drafted Kevin Gausman with the 4th overall pick in the 2012 draft, and since then Gausman has made a quick assent to the major leagues. He's only pitched 62 innings in the minors, with the majority of those coming at double A. While in the minors he was extremely impressive, striking out 25% of batters, walking 2% of batters, and posting a 3.11 ERA. This is while in double A. Gausman proved that he was ready for the majors, and as a result got called up from Bowie.

Last night he made his highly anticipated debut in the big leagues. For the most part he did not disappoint, giving up 4 runs in five innings, and striking out 5. The lone home run, a two run home run, was off of an inside fastball, and it was actually a nice pitch. Sometimes you just have to tip your hat to the batter, and that's exactly what needed to be done in this instance.

There is no cutter: A Kevin Gausman arsenal 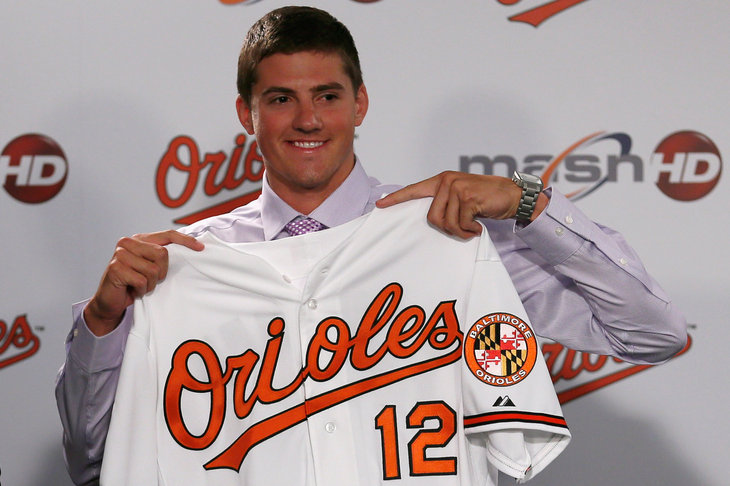 Lance tells us that Gausman doesn't have a cutter

Gausman started off the first inning throwing mainly his fourseam fastball, hitting anywhere from 95-98 MPH. Gausman didn't need much effort at all when throwing his fastball, and I imagine that is due to the relatively smoothness of his mechanics. He does a good job at generating the majority of his power from his legs, while having the upper part of his body follow with ease.

Throughout the night Gausman did a pretty good job at locating his fastball, this one in particular might have been a little generous. He did an excellent job at keeping the ball down, and like I said earlier, one of the only mistakes he made with it was on the home run that he gave up in the fifth inning. I'm not a scout, but after watching Gausman pitch last night I would say that his fastball is already a plus pitch.

Gausman's changeup was also highly impressive, and eventually it could be one of the better changeups in all of baseball. I thought he did a very good job at locating it, and when paired with his fastball it should be an extremely viable weapon.

Towards the end of Gausman's outing he began to struggle with his command, but being a rookie as well as making his first start in the big leagues this isn't a total surprise. In particular he was having trouble with his slider. There were two at-bats in the fourth inning where Gausman threw his slider in back-to-back at-bats, and both times the slider was fairly flat.

This is one example that I'm referring to. Guasman left his slider up, and Arencibia took full advantage of it, hitting the ball fairly hard into right. Out of all of his pitches this is probably the one that needs the most refining, else big leaguers will keep hitting it all day long.

Regarding his overall delivery I talked with our very own Ben Harrow, and we both agreed that Gausman has solid mechanics, but they aren't perfect. Since he's a big guy he could use his height better to prevent batter's ability to see pitches, but his crouch in his windup hides the ball well. I personally was reminded of Roy Halladay's windup, but that's just me.

Gausman is only 22 years old, and if it all clicks, and he also remains healthy, the Orioles should have a budding ace. While he did have his struggles, and it shouldn't be a surprise that he did, he also showed that he already has two MLB ready pitches and that he's ready to face major league hitters.

Thanks to both Ben Harrow and Craig Goldstein for help with questions that I had.