Appreciating the greatness of Clayton Kershaw

Taking a look at how Clayton Kershaw stacks up in history.

Share All sharing options for: Appreciating the greatness of Clayton Kershaw

To say that Clayton Kershaw is good is an understatement. He's only 25 years old, and he's arguably the best pitcher in all of baseball. Oh, and he's getting even better. It doesn't stop there either; right now, Kershaw is on pace to be one of the best starting pitchers that baseball has ever seen. While it's true that injuries happen, if Kershaw stays relatively healthy over the next 7-10 years we could be witnessing a true legend.

What really got me interested in looking deeper into Kershaw's success was this chunk of information that was shown on ESPN: 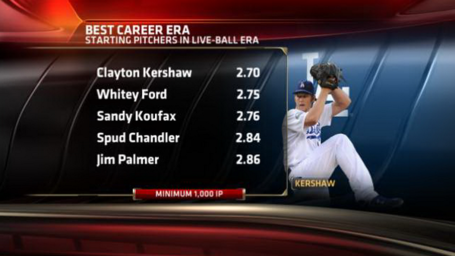 When I first saw that I almost had to do a double take. I knew Kershaw was good, but I didn't realize how historically good he was.

Naturally, the first thing I looked at was how Kershaw compared to another pretty good Los Angeles Dodgers pitcher. You know him as Sandy Koufax.

If you took out innings pitched, WAR, and the names, it'd be extremely difficult to tell the two apart. Nearly every metric is identical, and both ERA- and FIP- are extremely close on their own. Now Kershaw is still extremely young, but if as he enters his prime he should continue his assent as one of the best pitchers in Dodgers history.

I wasn't done there though. Next I made a spreadsheet and looked at how Koufax compared historically to other greats in the game. This time I took every starting pitcher since 1920 who threw at least 1,000 innings. I then divided their career WAR by the total amount of batters they faced, and got a metric called WAR/TBF. I've used this in the past, but mainly just as something fun to look at.

When I saw the results there were some names that surprised me. Being a Twins fan I knew just how good Johan Santana was, but according to this list he has the eighth most WAR per TBF among all starters since 1920. Kershaw slides in right behind him, with .0058 WAR per every batter that he faces. Over 900 TBF, that's a total of 5 WAR. 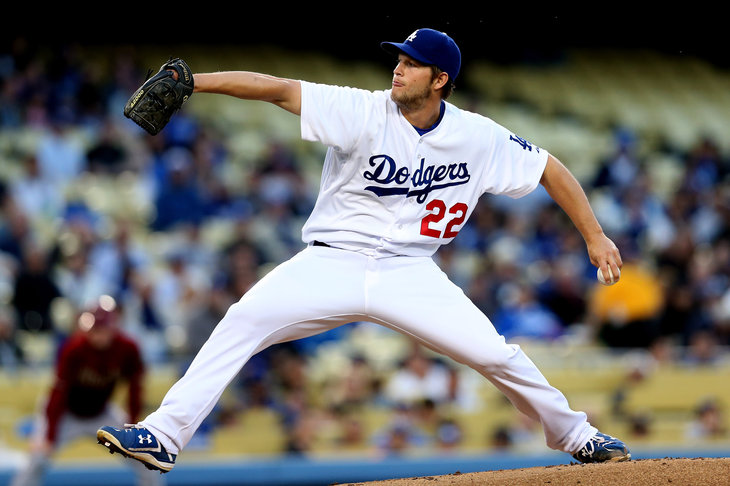 Marc Normandin also takes a look at how Kershaw stacks up against history.

Pedro Martinez finishes at the top of the list, and it really isn't close. For every 900 batters that Martinez faces, he would receive roughly 7 WAR, which is pretty incredible.

Kershaw also ranks favorably in a variety of other categories as well. He's in the top ten in terms of K%, coming in at fifth. Ahead of him are the likes of Randy Johnson, Pedro Martinez, Kerry Wood, as well as Tim Lincecum.

Kershaw's ERA- currently ties for third all-time with Roger Clemens, and is only behind Lefty Grove and Pedro Martinez. His FIP- is tied for eighth all-time, tied with Grove, Maddux, and Vance.

What we need to remember is that Kershaw is still only 25 years old, and it's extrememly difficult to temper our expectations. Like any pitcher, injuries will always be a concern, but if he can remain healthy we could be witnessing a true great.