Patrick Corbin is providing to be more than a stopgap for the arrival of Tyler Skaggs or Daniel Hudson's return from surgery and outperforming the rest of the staff in Arizona, let alone most of the MLB. What's leading to his newfound dominance and is his performance sustainable?

Last night, Patrick Corbin threw a complete game in Colorado, striking out 10 Rockies and holding them to three hits, a walk and one run. The lefty has been a pleasant surprise in the Arizona rotation so far in 2013, making up for the slow starts of Ian Kennedy and Brandon McCarthy. Last year, in his first stint at the major league level, Corbin had a 4.54 ERA/4.00 FIP in 107 innings, allowing 14 homeruns, the 13th most amongst starters who pitched 110 innings or less. After a dynamic April where he posted a 1.89 ERA/2.64 FIP in 33 innings, many expected Corbin to regress. Instead, through 29.1 innings in May, he is still chugging along with a .92 ERA. In fact, he hasn't given up more than two runs in any of his nine starts! So what has changed? Why is Corbin, who was expected to be a temporary solution for the Arizona rotation until Daniel Hudson returns from surgery and Tyler Skaggs develops enough for the major leagues, achieving newfound success? Is all of it sustainable?

Most importantly, Corbin's velocity is up. Mike Podhorzer was ahead of the curve back in early April, noting that his spring training velocity was up from last year. Sometimes velocity changes in spring training may not carry over into the regular season but this hasn't been the case with Corbin. Throwing a fourseamer, sinker, slider and changeup, all of these pitches have gotten faster. Brooks Baseball has the average velocity of his fourseam fastball at 91.39, sinker at 91.64, slider at 79.36 and changeup at 80.82 for 2012. Now, in 2013, every pitch is up nearly one MPH with the fourseamer increasing to 92.43, sinker to 92.38, slider to 80.34 and changeup to 81.39. His pitch usage hasn't changed all that much, with the biggest difference being a 4% increase in sliders. As Matt Swartz explains, an increase in velocity can lead to better performance, which may be through a higher strikeout rate, lower BABIP and fewer HR/FB. While Corbin's strikeout rate is only slightly better than last year's, he definitely has been benefiting from a lower BABIP and many fewer homeruns, only allowing 2 thus far.

What Can We Learn From Expected Strikeout and Walk Rate Outliers? 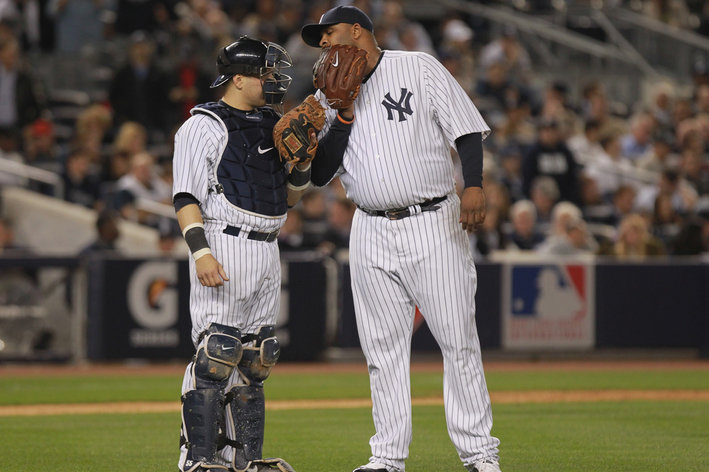 Chris takes a look at some other pitchers who are overperforming their peripherals and examines pitchers who post unexpected strikeout and walk rates.

Before last night's game, Corbin and Shelby Miller had the best ERA- in baseball at 38. But when you normalize the HR/FB rate, Corbin sports a downright average 100 xFIP-. Last year, he gave up just a couple too many homeruns, with a HR/FB 2% over the league average. The 2013 average HR/FB rate is 11.1%. Corbin has a significantly smaller 4.2%. He's likely going to give up homeruns at a higher rate but with the increased velocity boosting the effectiveness of his pitches, perhaps Corbin can boast a lower than average HR/FB rate at the season's end.

Also alarming is his very low .259 BABIP. Perhaps Corbin's improved arsenal is creating a new batted ball profile, which can help explain the drop in BABIP. His GB/FB is nearly identical to his 2012 but he's giving up less line drives and more groundballs and fly balls. Still, Corbin is giving up less line drives and fly balls than the league average while inducing more groundballs. After his 10-strikeout performance in Colorado last night, his strikeout rate will increase to above average. But he's walking more people at a higher rate than last year, right about league average in 2013. The major standout is his tremendous LOB%, which is sitting at 89.2%, the third highest in the MLB. This is where Corbin's due for the biggest regression. As Fangraphs explains in their glossary, pitchers with high strikeout rates are able to get out of jams, leading to a LOB% above the normally average 72-73%. Corbin's striking out batters more than he did last year, but he's right around league average. Pitchers with a LOB% above 83% are those extreme strikeout pitchers like Shelby Miller, Clayton Kershaw, Matt Harvey and Clay Buchholz, all who are striking out more than 9 per game. In comparison, Corbin is striking out about 7.5. His LOB% is a fluke and is due to regress closer to the mid-70's, given his current strikeout and walk rate and a noticeably low BABIP.

Anyone studying Corbin's peripherals at the end of April likely came to the same conclusions that have been listed above yet he's still succeeding. He has undoubtedly improved from last year with more effectiveness stemming from an increase in velocity across the board but what he is doing right now is simply not sustainable. Balls are going to get through holes eventually. Fly balls are going to leave the yard. Last year, Corbin suffered from a little bit of bad luck when he posted a 4.54 ERA but a 3.73 xFIP. An ERA in the 3.5-3.7 range at the end of the season is looking extremely reasonable right about now.