Much Ado About Bunting: The Art and Skill of Laying it Down

What makes a player a good, or successful, bunter? Is it because they have good to great speed? Is it because there truly is a skill associated with laying down a good bunt? Also, big thanks to fellow BtBS writer Chris St. John for the idea to name this piece what I did.

Share All sharing options for: Much Ado About Bunting: The Art and Skill of Laying it Down

There are many reasons to detest a player laying down a bunt and it's certainly easier to think of the many different reasons why we, collectively, dislike bunting overall than the reasons why we like it. It's been suggested that when you only play for one run, by laying down a sacrifice bunt, then that's all you are going to get. It's also suggested that the success rates of bunting are so low that you are simply giving away an out to your opponent and we all know how precious those are. Then of course there's the perception that slow players should never bunt because they are too slow to succeed at it and fast players should bunt more often because they stand a better chance of success.

The first thing we should take a look at is the success rates of individual players when it comes to bunting for a hit. In order to do this I've pulled data from FanGraphs that shows all bunt hit success rates from 2002 to 2012. During this period of time the average success rate for all players is just 25.76% when we remove the players that didn't attempt a single bunt. The problem with that result though is the fact that it takes into account all of the players that may have only attempted to bunt once or twice and were unsuccessful.

Here is the breakdown of bunting success rates based on number of bunt attempts from 2002 to 2012.

As you can see, from the chart on the left, the higher the number of bunt attempts by players the higher the overall success rate but the total number of players attempting a high number of bunts goes down dramatically. I'm sure we could attribute part of this cause due to the fact that not everyone is a good bunter and of course that a manager is more likely to have non-power hitters attempt a bunt than they are their power hitters.

However, when we begin to look at specific ranges the overall success rate goes down somewhat and we can formulate a clearer picture of the success rates that players experience based on their bunting prowess, or at least the expectation from their managers or themselves that they can bunt successfully.

First and foremost we should determine who we would consider fast, which can be a pretty subjective thing in-and-of-itself but let's try anyway. A few general statements about players who have decent speed are that they typically steal an above average amount of bases and in many cases, not all but many, they have an average to above average success rate doing so.

Examining the first idea that players with above average speed steal more bases, thus they would have more bunt hits I developed this graph showing the correlation between the two. 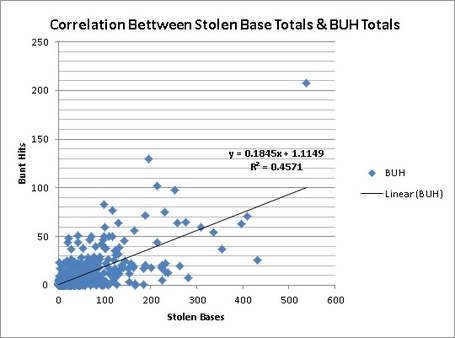 As you can see the R-Squared value is just 0.457, which isn't completely useless, but it also doesn't give us an incredibly strong correlation either -- and I consider a strong correlation to be something closer to the .7 range. It's still interesting to see that the players with more bunt hits also have relatively more stolen bases to their credit, with the major outlier in both categories being Juan Pierre (top-right diamond).

Examining the second idea now: are players with a higher rate of success stealing bases also more successful at dropping a bunt down for a hit or do they have a high success rate based on bunt attempts? 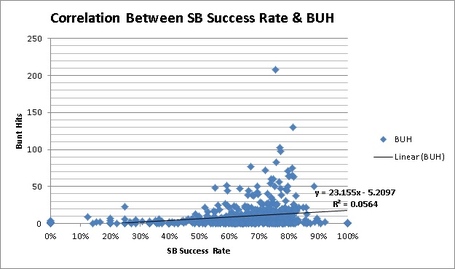 The same is true when we compare stolen base success rate to overall bunt hit success rate , with the correlation being slightly lower. 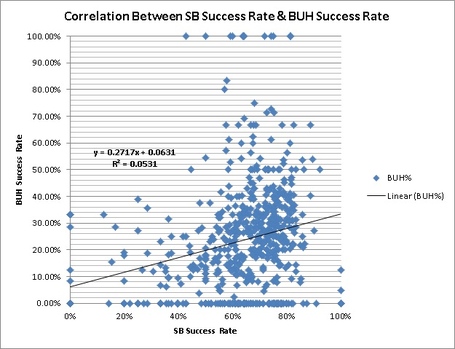 Out of curiosity I decided to take a look at whether players who steal more bases have a tendency to attempt more bunts, with the thought being that the perception of those types of players that managers, coaches, or even themselves may hold is that they would be good at it. 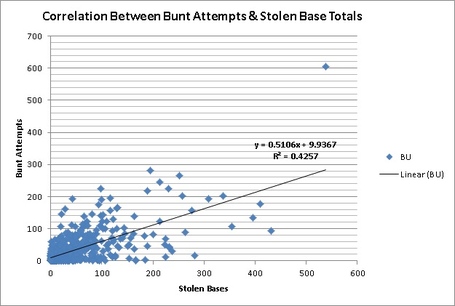 That perception certainly rings true, to an extent anyway, because players who steal more bases also attempt more bunts. We've already seen that it doesn't necessarily make them better bunters but they do attempt more which could also account for their higher bunt hit totals. However, it does make sense that faster players would be likely to bunt for hits with a reasonable amount of success even though stolen base success doesn't hinge entirely on speed.

So we've worked through the data available to make the case that while speed certainly doesn't hurt when it comes to bunting for a hit it's also not the lone factor in determining whether a bunt is successful or not. Some of the more prolific speed guys, at least the ones we are able to pull data on going back to 2002, such as Juan Pierre and Corey Patterson have decent results when it comes to bunting for a hit but other speedsters such as Carl Crawford and Chone Figgins aren't so great at it.

Now let's focus more on where a bunt is put into play, and which defenders fielded it, as opposed to the speed of the player. If we look at the table below we see three positions that fielded bunt attempts and what the success rate of the players were who attempted them.

We already know that placing a bunt down the third base line is the best possible spot on the field to direct a bunted ball to go. The fact that the success rate of sacrifice hits and the bunt hit average is so high when they are hit in that direction is nothing short of amazing. Why all players don't put more time and effort into practicing laying down the "perfect" bunt is beyond me because it's obvious that teams could benefit by dropping a good one down and getting that man on base or would benefit by forcing the opposing defense to move their corner infielders in just in case.

What about the other zones on the field though? We already know that dropping a bunt that goes down the third base line is the ideal position for the ball to go. It's also not a bad idea to drop one down perfectly along the first base line if you're quick enough to beat the fielder and not have them tag you. But there are other areas on the field you can direct a bunt as well such as towards the shortstop, second baseman and pitcher (the dead man's zones), and between the first and second baseman.

According to research done by Baseball Info Solutions, which I've pulled from an article written by John Dewan on Bill James Online these are the zones on the field: 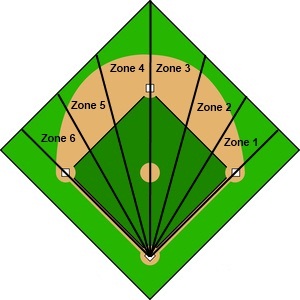 Below are the breakdowns of the batting averages by zone in 2011 based on sacrifice and non-sacrifice situations provided by John Dewan of Baseball Info Solutions.

Batting Average by Zone, 2011
Sacrifice Situations, SH is not an AB

Looking over this data from just the 2011 season it's plain as day that it's not about speed, at least not as much as some of us would like to believe it is, and it's far more about ball placement that determines the success of a bunt or sacrifice-bunt attempt. That could also explain why a player like Carlos Pena is 27 for 44 (61.4%) in bunt attempts for hits from 2002 to 2012. You don't have to be fast to succeed at bunting as long as you know how to bunt effectively and can put the ball in the right spots on the field.

You can follow me on Twitter @BSLLanceRinker, find out more about me by reading my BtBS bio, and even listen to my weekly podcast 'Bird Talk' that I host and produce weekly -- we talk about the Baltimore Orioles.