It is generally assumed that a balanced lineup is the most efficient, but is there any truth to this? Using team OBP, wOBA, and R/G, are there any trends that pop up over the past 17 years?

Share All sharing options for: Lineup Styles, Part One

In the sabermetric world, we have found a way (wOBA) to combine OBP and SLG to create a single metric for offensive production. Since 1996, on the team level, wOBA has a .955 correlation to runs per game, so it's safe to say wOBA works pretty well. Clutch performance and baserunning are the two main factors that cause differences between the two.

As a Braves fan, I heard plenty of hype going into the season about the extreme power and strikeouts throughout the lineup. While having all that power is nice, I didn't know if it would be as valuable without a balance of OBP-heavy hitters. Without guys on base, the power would likely drive in less runs than the context-neutral wOBA would indicate. I figured the opposite would also be true, having too many OBP-heavy hitters, creating the need for more baserunners to score.

Unknown to me before starting this project, Tango did a quick post last week on his site, using his lineup generator to clone players and come up with run values. The high-OBP lineup scored about 10% more runs than the high-SLG lineup. In the comments section, he notes that the lower wOBA gets, the OBP-heavy lineups decrease production faster, eventually being passed by SLG-heavy lineups.

While all of this theory is great, actual results will really help the cement the cause. Since 1996, there have been 506 team seasons, a nice sample size for the modern-style of game. Running a simple regression, I found expected R/G given the team's wOBA. Using OBP-wOBA as offensive style, I paired style with the residual value for runs scored. 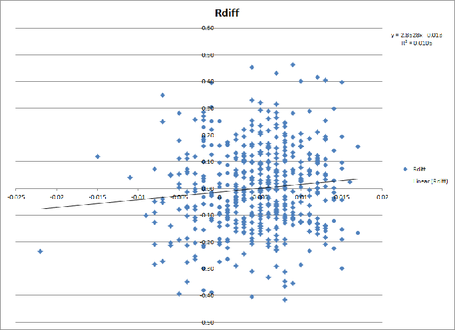 Here is the average difference in runs with each style level. 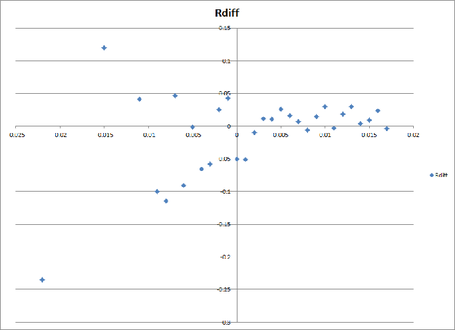 As you can see, there isn't much correlation between style and the residual runs scored. The most power-heavy team, way on the left side, is the 2010 Blue Jays, where their .334 wOBA and .312 OBP only resulted in 4.66 R/G, almost a quarter-run less than expected. It looks like there is a slight dropoff in residual runs scored with a power-heavy lineup, but sample size is also a factor. League-average OBPs are actually about 4-5 points higher than league-average wOBAs, so the '10 Toronto team was actually about 27 points below the average. The most OBP-heavy teams, the '97 Marlins and '04 Giants, were only 12 points above the average.

Over a 162-game schedule, most of the style groups only caused a single-digit run increase or decrease in expectations. In part two, I am going to break down each 2012 team by player, seeing if too many of one type of hitter hurts, having too many extreme-style hitters change things, or any other trends.