Finding a home: The search for the next MLB city (Part 1)

A lot of people talk about how the Rays and other teams are the victims of unfortunate ballpark/city situations. However, if it came to it, where would they move to? In this series, I'll break down what cities have the resources, people, and drive to become the next host of a MLB franchise.

Share All sharing options for: Finding a home: The search for the next MLB city (Part 1)

A sad fact in life is that not every business enterprise can be successful. When times get tough enough, sports franchises are forced to change the way they work (sometimes with extreme measures like relocation). This series is going to explore just how feasible relocation currently is. The question being asked here is this: if any of the 30 MLB franchises decided to up and move, where could they go and what would be their likelihood of success?

To start, let me make one thing very clear: this post is not about expansion. Adding a new MLB team changes the dynamic of the discussion. Establishing a brand is different than relocating a brand to a new market. Here is the setup:

1) All North American markets are open for business. This includes several major Canadian and Mexican metro areas. (Note: For this series, the only non-U.S cities included are Mexico City, Montreal, Toronto, and Vancouver.)

2) Markets that currently host a team are eligible to gain another team.

3) Host cities will be categorized by metro area.

Setting Up the Study

Before talking about the numbers, the framework of the study needs to be set up. Firstly, there were 46 metro areas included in the study: the 26 current MLB markets and 20 other metro areas. There were no minimum requriements that metro areas had to meet. Secondly, Gross Domestic Product is used to help define the economic state of the area. GDP is defined as an area's output of goods and services, and this measure is typically measured in one fiscal year. (Note: For this study, 2010 is used as it was what was available.) GDP allows you to see how money is being earned or is flowing through a given market and serves as a way to measure the affluence of a market. However, GDP is a set number and doesn't take into account how many people it took to produce the goods involved.

To measure the markets in another way, GDP per capita is used, which is an indicator of the money being earned by the individuals within the market. Within the markets studied in this research, GDP/Capita was heavily dependent on the volume of college graduates in the area, with an R of .65. This makes it important to know the volume of college graduates in an area. GDP numbers were borrowed from this graph from economist Joe Cortright. The ranges of college graduates were turned into ranks (15-24 is 1, 25-34 is 2, etc) and measured against other variables such as GDP. The last major items considered were unemployment rate and demographic information, both of which help to tell more about the current ability of a metro area's population to possess and spend disposable income on baseball.

When attendance and wins are added to the above variables,the current state of MLB metro areas can be analyzed. To help define what cities might need to host a team, here are the minimum and average numbers for each of the key variables:

This sets up a nice framework for what should be expected of MLB teams. When compared to non-MLB metro areas, current MLB metro areas have much higher populations, much higher GDP, larger GDP/Capita, a better average college graduate score, and a lower rate of unemployment. In short: MLB cities are already MLB cities for a reason.

Setting Up a Predictive Model

The next step here is using the information to set up a model to determine whether or not a city putting up a bid for a team will be able to maintain a strong enough business model to survive on its own. Attendance is a driving force behind any strong organization. Getting people in the park increases the opportunity to create revenue through concessions, merchandise sales, and other avenues in addition to ticket sales. Due to this, attendance is going to serve as the main focus for this predictive model. If fans don't come out to games, then teams are going to struggle to make money.

To find out what makes people show up, the main variables mentioned earlier were related to attendance.. For this study, five-year averages were used for attendance. The primary factor in whether or not fans would attend games is the average number of wins achieved per season. When the average number of wins over a five year span was related to the average attendance, a correlation of .68 was found. The evidence suggests that people pay to watch their teams win, which means the first step in determining success is figuring out how often a team will win.

The problem that this causes is the fact that this scenario calls for any potential team to move. This even includes franchises like the Yankees and the Red Sox. Therefore, when the results of the model are shown, they will be shown for a "bad" team (70 wins), an "average" team (81 wins), and a "good" team (90 wins). GDP, GDP/Capita, and population size were also tested. In the case of GDP/Capita, no evidence was found to suggest it has a true impact on attendance. The same was not true for GDP and population size, both of which correlated to attendance with an R north of .47. While the impact may be small, these are factors that can be used to help build a model. 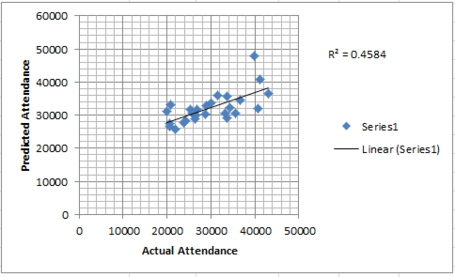 Since the relationship between GDP and attendance was the weakest of the three, I wanted to see how the model would do if GDP was not used in the equation. When GDP is removed,the equation becomes:

The results of this change are shown below: 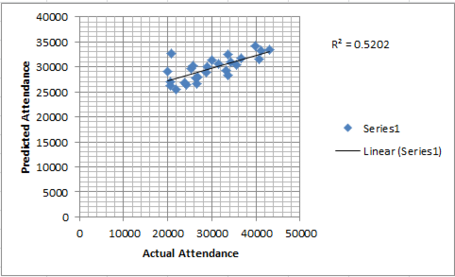 When wins, population size, and a given assumption that people will attend games simply because they love baseball are used to to predict attendance, a relatively strong model can be formed (.72 R) that is stronger than simply using wins alone.

Current MLB cities are prime real estate for MLB franchises. They boast high populations, high GDP, high rates of GDP/Capita, high volumes of college graduates, and relatively low unemployment rates when compared to the other 20 metro areas included in this study. However, it appears that not all current MLB franchises are thriving in their cities, which means that the next MLB city is going to have to do more than score well in the given model for predicted attendance. In the next post, I will start breaking down metro areas and analyze whether or not they are viable options to become the next MLB host.