What Can We Learn From Expected Strikeout and Walk Rate Outliers?

Which pitchers strikeout and walk more or fewer batters than we expect and what similarities do they have?

Share All sharing options for: What Can We Learn From Expected Strikeout and Walk Rate Outliers?

Two weeks ago, Glen Perkins stated in a Fangraphs Q&A: "I don’t know if there’s a stat for an expected strikeout rate based on swings-and-misses and chases." Well obviously, I went into overdrive attempting to create such a stat. However, my quick work was in vain, as Beyond the Box Score's very own Blake Murphy did exactly that in his series on predicting walk and strikeout rates the day before the Perkins Q&A was posted.

Since Blake was ahead of us all on this front, I want to attack the idea from a slightly different perspective: which pitchers consistently outperform our expectations based on their peripherals and what can we learn from them?

Just to keep things interesting, I ran my own multiple regression to find expected strikeout and unintentional walk and rates. I used the same minimum of 350 total batters faced to keep my method similar to Blake's.

Blake used only SwStr%, fastball velocity, and league average to create his equation, with basically the same results as mine. I missed fastball velocity when initially running the calculations and feel like his simpler and as accurate equation is a much better route.

Blake did a similar shotgun technique to me with similar results. It's harder to predict walk rate based on peripheral stats than it is for strikeouts. I wonder if this is because there is not as much variability in walks as in strikeouts.

Based on these equations, which pitchers consistently outperform their expected rates?

I took the expected rate and multiplied by the total batters faced that season, then subtracted this from the actual amount of strikeouts and walks. So in 2010, Cliff Lee had 185 Ks and 16 UIBBs, but was expected to have 159 and 25 based on his peripherals, for differences of 26 and negative 9, respectively.

I did this for each player season since 2007 and added up all the differences to find the top outliers.

Here are the leaders with at least 1,000 batters faced:

What a weird group. Worley isn't exactly a strikeout pitcher, hovering just above league average. In the two full years he has appeared in the major leagues, he has a total of 226 strikeouts. However, based on his peripherals, we would have expected him to only rack up 163. Travis Wood is in a similar boat. Gallardo on the other hand, is definitely a strikeout pitcher, ranking 21st in the league since 2007. Bedard and Morrow also have a propensity to get swings and misses.

Of these top five, Wood is the only one who regularly throws a changeup. He's also the only one to heavily throw three different fastballs (four seam, sinker, cutter).

And pitchers with the most strikeouts missing per plate appearance based on their peripherals, minimum 1,000 batters faced:

Okay, so a knuckle-baller broke the system. Beyond that, we have two lefties and two righties. What do Olsen, Karstens, Capuano, and Byrd (and Wakefield, for that matter) have in common, according to Brooks Baseball?

They're all soft-tossers. So I really should have included fastball velocity in my metric like Blake did. Interestingly enough, all four of them also rely heavily on fastball-slider-changeup repertoire, though I'm not sure how common that is.

This chart summarizes the findings: 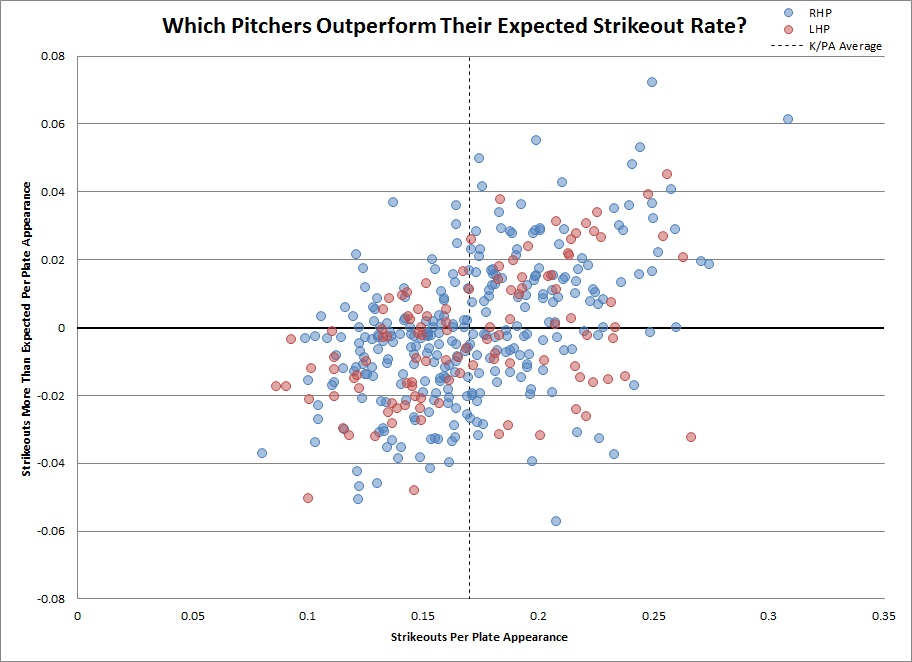 Jonny Venters sticks out like a sore thumb on the bottom right, but a full 46% of the players with a strikeout rate above 0.20 and fewer strikeouts than expected per plate appearance are left handed pitchers. Compare this to 28% of all pitchers in this study who are left-handed and we have a clear trend. I wonder if some of this is due to lefties facing more right handed hitters. They are less likely to strike out the hitters that they see more often, leading to lower than expected strikeout rates. This isn't the case with every lefty though, as both Bedard and Wood are top-ranked at getting more strikeouts than we would expect.

What do the top five pitchers who outperform their peripherals and walk fewer people than we expect have in common? Not throwing the four seam fastball a lot.

Kuroda, Francis and Hernandez are all sinkerballers, throwing their two seamer a majority of the time. Anderson does throw his four seamer more often than any other pitch, but only does so at a 41% clip. He throws a slider nearly as often at a 33% rate. Litsch throws his four seamer, two seamer and slider at comparable rates, but throws a cutter more often than either of those three.

Now the pitchers who walk more than we expect:

Sanchez and Perez are the only two of these five to appear in the major leagues this season. It's not going very well for Sanchez, who has a 9.68 FIP in 13 innings, although his walk rate has fallen to a more manageable 0.11. Perez is a little better off with a 3.67 FIP. 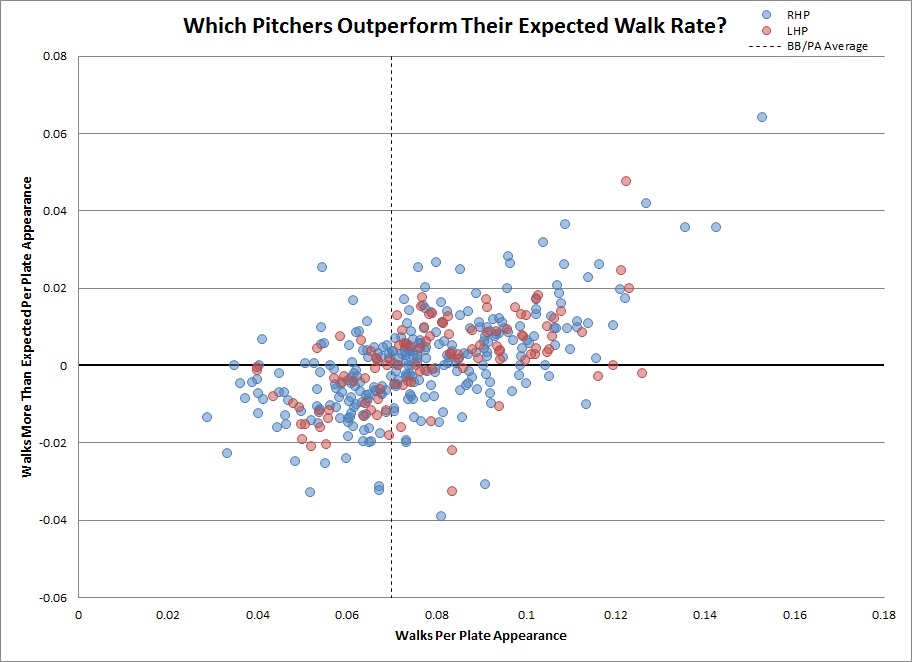 Pitchers that walk a bunch of people tend to walk even more hitters than we would expect. It's a linear trend and is much more clear for walks than for strikeouts. Perhaps this is why walk rate is a better next season predictor than anything else. I had a classmate in college that would get into failure spirals. Once one thing went wrong, he would get angry, leading to another thing going wrong, leading to more anger. It was rather funny to watch from a distance, providing he did no real harm to himself or others. I feel like that's what happens with pitchers like Young and Matsuzaka. Once the walks start, they just keep coming and coming until eventually they've lost control of the game.

So what have we learned? Based on the preceding small sample sizes, this may be worth more digging into pitch usage data.

Does not having a changeup help pitchers get more strikeouts than expected? Do pitchers with fewer than expected walks rely less on their four seam fastball?

As usual, thanks to Fangraphs for the data.