How and When does Velocity Change During a Start?

Taking a look at fastball velocity trends of starting pitchers over the course of a typical game.

Share All sharing options for: How and When does Velocity Change During a Start?

Recently, I investigated which types of pitches starting pitchers throw with which frequency as they work their way through the opposing lineup multiple times within the same game. One of the statements that I made in that article was that I assumed that fastball velocity would be highest at the start of the game, and in general would slowly decline as the game progressed.

In the comments, the legendary mgl mentioned a study done by Jeremy Greenhouse at Baseball Prospectus examining starting pitcher fastball velocity versus pitch count. The study found that fastball velocity peaked around pitch 20, a pitch count that would normally fall around the middle of the first time through the order given the average number of pitches per plate appearance. It was interesting to me the study found that pitchers do have to work up to achieving their peak fastball velocity, that it is not present right from the first pitches of the game.

Since I found the study intriguing, I decided to attempt to repeat it, with a few modifications. Greenhouse selected the top velocity quartile for each starting pitcher at each count for use in his study. Using the fastest 25% of pitches was an attempt to capture only fastballs in the study, while breaking it down by count was done to control for the fact that pitchers throw the ball harder in certain counts than others.

In this study, I have also selected the top velocity quartile for each pitcher in each game. I added an extra proviso that the pitch must also have been classified as a fastball (four-seam, straight, two-seam, sinker, cutter, split-fingered) of some description by GameDay. This removes occasions where sliders or knuckleballs for example may fill up part of the sample in a given game for certain pitchers. In this case I truly want to study fastballs. I had actually planned to remove cutters as well from the list, but in many cases these appear mixed in with four-seamers among the hardest pitches that a pitcher throws in a game – so I kept these for the study.

While I believe that controlling for the count is important, we also know that pitchers throw with slightly different velocities depending on the current base-out state as well. Below are three tables, showing the seasonal league-wide average velocity difference between pitches thrown in each count and each base state for 0 out, 1 out and 2 out relative to the first pitch of a bases empty, no out situation:

I feel that controlling for these other aspects of game context would also be important in such a study. For example, might the Greenhouse study that found a velocity peak around 20 pitches have partly been influenced by an elevated average number of baserunners at this time, generated by the presumed highest OBP hitters at the top of the lineup? Perhaps not, but I believe it is possible, so it would be better to control also for base state and number of outs as well, as we can see from the tables that these also affect relative pitch velocity.

Now, there is a fairly significant drawback to wanting to control for these other states. While Greenhouse calculated the top velocity quartile for each pitcher for each of the 8 possible counts, doing so for each pitcher for each of the 288 possible base-out-count states would leave miniscule sample sizes for each pitcher. So, for the study I have controlled each pitch based on the seasonal league-wide relative velocity delta from the tables above. I certainly do not love this part of my approach, but I believe at least at the league level that this will be effective. 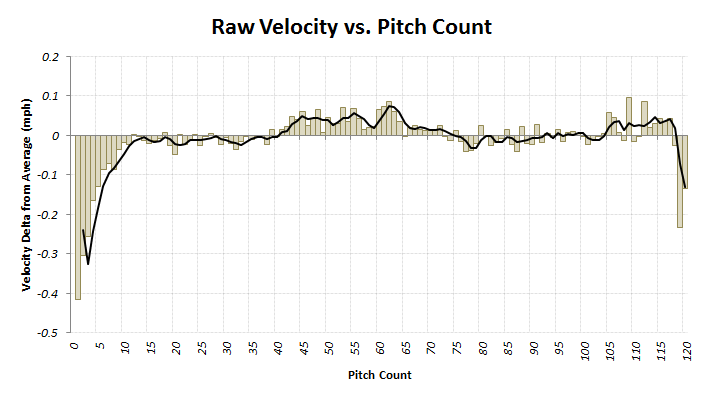 One of the most alarming areas of this graph is the first couple of pitches of the game, in particular the opening offering, which rates as the slowest relative pitch of the game. Remember though, that this is the one pitch in the game where the base-out-count state is known, and that this particular combination is one of the lowest relative velocity entries in the tables (since most entries are positive). Even by the second pitch of the game, there are suddenly seven different base-out-count states possible depending on the result of the first pitch of the game (can you name them?).

The following shows the same graph, but now adjusted for base-out-count state. I have also overlaid the number of pitches thrown over a season to hitters faced the second time in a given game, since they appear to be quite coincident. 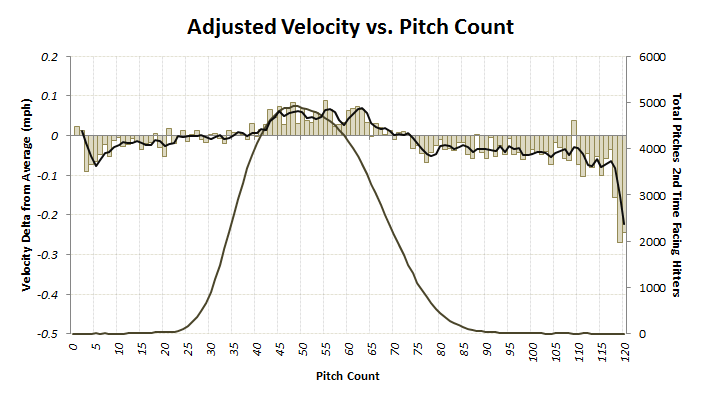 Another note to make is that once adjusted, pitches 1 through 110 are all found to be within +/- 0.1mph of the average of the selected fastballs. After this point in the game, we see velocity fall off more dramatically, which is not surprising. Note that before we corrected for base-out-count state, we had some higher relative velocity measurements near the end of the game, but these have disappeared in the adjusted version.

There is a major difference between the finding of this study compared to the Greenhouse study, which is the pitch count at which velocity peaks within a game. While Greenhouse found highest velocities tended to be in the 15 to 25 pitch count range, in this case it appears the peak is a more stretched out stage of the game between roughly pitch counts 45 to 65.

I have to say, I am surprised by this difference. Perhaps I am missing something, but I would not have expected such a discrepancy. Taking my results at face value, we can see from the overlay showing when the second time through the order tends to occur that the peak velocity lines up quite well with the second time facing each hitter.

I know from my recent work that pitchers begin to move away from the fastball and introduce more offspeed pitches the second time through the order. If this is true, it would suggest the second piece of the approach to facing hitters a second time is to amp up those fewer fastballs a little higher than what they flashed the first time against the batters. This makes sense to me strategically, although realistically on average the extra oomph here is only about 0.1mph between the two plate appearances.

Since the differences in velocity that are being detected here are quite small, it is worth considering other potential confounding factors. Air conditions may certainly impact velocity. Given the way that PITCHf/x operates, it will measure the position of the pitched ball between 40 and 10 feet from home plate, then using a nine parameter model will determine the best fit for the ball path. The model assumes constant acceleration, but is able to achieve the fit based on these nine parameters without needing to know about any characteristics of the air in which the ball was thrown. Since the air conditions would not change drastically over the course of an individual pitch, I believe that the real potential source of velocity error here would stem from the fact that the algorithm extrapolates to calculate a "start speed" at 50 feet from home plate instead of the actual pitch release point, which would be closer to 55 feet from home plate.

Over the course of a game, there is more opportunity for air conditions to change. In particular, for night games there would often be cooler temperatures toward the end of the game than the beginning. While it would not be impossible to track down environmental conditions at the closest weather station at hourly periods throughout each game (in fact I did this for all Tampa Bay Rays games for one season), this is a daunting task. I believe two researchers did undertake this task for the entire PITCHf/x era and presented their findings at the most recent SABR conference. Alas, this level of detail was not included in this meager study.

To take a look at relative fastball velocity over the course of the game for individual starting pitchers, I broke up the game into pitch counts 1-20, 21-40, 41-60, 61-80 and 81-100, and calculated the average of the qualified fastballs within each of these ranges over the season. Similar to something I tried a while back with looking at pitchers who increased velocity most as strikes mounted in the count, I calculated an average game "slope" for each pitcher. This slope is just the average rate of change of velocity per 20-pitch block within their average start. Given that velocity tends to start lower, peak toward the middle of the game, then drop off again at the end of the game, the average slope across the league was actually just under 0.

After doing this, I noticed some of the usual disabled list suspects pop up near the list of guys who showed the highest positive slope. As I did in the earlier study, I decided to break the sample into groups based on slope and look up the number of disabled list trips each group experienced:

There is certainly a rising trend here. I would be cautious about making any significant claims though, as this is data from only one season, and these numbers are small enough that a handful of DL trips more or less in these groups could change the landscape quite a bit. The trend is consistent with what I found previously with respect to relievers who increase velocity the most within a plate appearance based on the number of strikes in the count - namely that ramping up too much seems to be coincident with a higher injury rate.

If we take this at face value, it would appear that pitchers who see their velocity fade as the game wears on are less prone to injury than those who throw harder as they should be more tired. If true, perhaps this is a reality of what our bodies can realistically handle without breaking down. I should point out, that despite the common knowledge that Justin Verlander maintains his velocity deep into games, he actually posted a -0.07 slope using this method, putting him in the least injury-prone group. He did in fact maintain his velocity very solidly through pitch counts 21-100, but actually pumped his fastball significantly faster in the first 20 pitches of the game, driving his fairly high negative slope.

It would be interesting to expand this study beyond one season, for both the velocity trend as well as the potential link to pitcher injuries. I welcome your feedback, in particular on the use of the seasonal league-average base-out-count tables to control each individual pitch in the study. If you have any ideas on how to improve on this, as usual please let me know!

Credit and thanks to Baseball Heat Maps for PITCHf/x and injury data upon which this analysis was based.