After a few down years in New York, A.J. Burnett is once again an excellent pitcher.

I made fun of him on a recent podcast for having a rat face and an unlikable look, and I suggested that might be why some underrate him – he doesn’t always seem like a likable dude. (At times he does, of course, but maybe you don't catch those instances.) He also played for the Yankees, so that’s not exactly in his favor, either.

But there are some who love him. And if you watch him, how could you not? Burnett has been excellent this year. At age 36, he’s having perhaps his best start to a season. Check the resume, with how the stats rank in his career profile in parentheses:

He’s pitching well beyond PECOTA’s 90th-percentile projection for him. It’s early and the sample is small at just 56 innings, but he’s already accumulated 75% of his 50th-percentile WARP for the year, just nine starts in.

And he’s doing this without a deflated BABIP (.292) or the benefit of infield flies (career-low 2.8%, although not inducing these might be considered a negative). His strand rate is at it’s highest at 76.9% and is certainly due to come down, while he’s also limited HR/FB to 8.3%, the second best mark he’s had since batted ball data became available in 2002. The K-rate is also probably unsustainable given his velocity and swinging strike rate (xK% of 23.7% using my method), though we can only explain about 75% of Ks, anyway.

His fastball velocity is at last year’s level (92.3 MPH) but could tick upwards as the season progresses, as most pitcher velocities do. This comes after a move to throw fewer fastballs since 2011 when his velocity dropped below the 93 MPH level.

Instead, he’s moved to throwing more sinkers, knuckle-curves and change-ups. The sinker comes in at the same velocity as the heater, with about a 5 MPH difference in velocity with the change-up. So batters could sit on the two faster offerings and adjust to the change, except Burnett also throws that 82 MPH knuckle-curve a third of the time, a pitch that’s nearly impossible to adjust to if you’re sitting fastball. That knuckle-curve has a 43% whiff/swing rate and a 30% foul/swing rate, meaning it’s only being put in play on 27% of swings.

Last year, Burnett coaxed swing-and-misses on 45% of swings at the knuckle-curve, best in the bigs among curveball offerings. In 2011, he was third (42%). This pitch has been worth more than a run per 100 pitches each of the past three years, peaking at 1.55/C this season.

At age 36, after 2200 career innings, A.J. Burnett is peaking, and it’s equal parts unheard of and awesome. The number of pitchers age 35 or older who have posted a K/9 of greater than 10 in the Retrosheet Era (1916-present) is 14, if you include Burnett (and Ryan Dempster) this year. Other than Nolan Ryan, Roger Clemens, Randy Johnson and Curt Schilling, basically nobody posts a strikeout rate this high this late in their career (yes, part of that is the league-wide rise in strikeouts, but a big part of it is also Burnett being nails).

If you look at these pitcher aging curves from FanGraphs, what Burnett is doing becomes even more impressive. Basically, Burnett has made the move from great pitcher to good pitcher to mediocre pitcher and now back to great pitcher. He’s been a blast to watch so far. This article should have been more visual and more graphical, I realize, but I wanted to write about Burnett’s awesomeness, not draw about it. I’ll throw a graph at the end for the visual learners.

One more thing: Burnett makes $16.5M this year, but the Pirates are only on the hook for $8M. He’s on pace to out-earn that by a longshot, and even when some of these indicators regress as the season progresses, it’s clear that the Pirates made a smart move in grabbing him. As a pending free agent, it’s possible he could become a deadline target for a (more legitimate) contender, and it’s obvious that the age and price tag shouldn't scare anyone off. 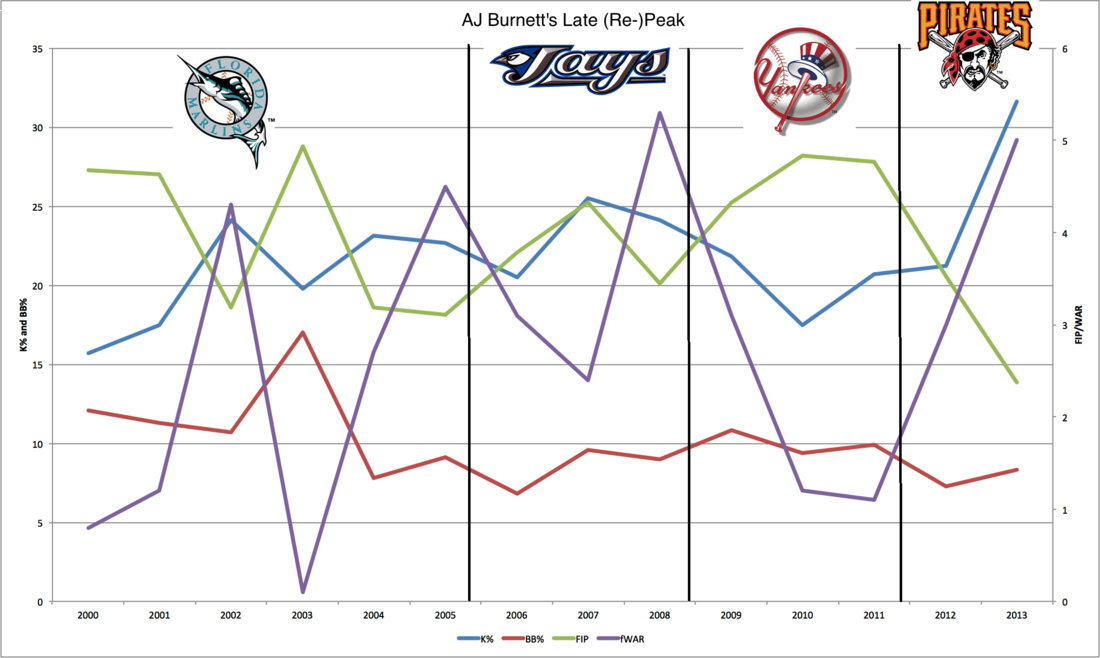