Changing the Way We Look At Offense, Part Six: Summary and Future Implications

WHB analysis has provided a new way to look at baseball. Before leaving the subject, it's essential to know why the WHB theory is important and what it could mean for the future of baseball analytics.

Share All sharing options for: Changing the Way We Look At Offense, Part Six: Summary and Future Implications

There is a problem with most modern offensive analysis: it is based on results on the field rather than the process that leads to those results. The goal of this research was to attempt to find a way to analyze offensive players and pitchers that would better reflect this underlying process. Well-Hit balls (WHB) provide this opportunity. WHB are defined as balls that are hit with high velocity, optimal trajectory, and are squared up on the barrel of a bat. This combination of three events helps to shed light on the effectiveness of a batter when he makes contact with the ball. If he is hitting the ball hard, it means fielders have less time to react and get to the ball. If he is hitting it with optimal trajectory, he is creating the ability for the velocity to lead to increased distance away from the plate. If he is squaring the ball up, it suggests he is seeing the ball well and his swing has worked well enough mechanically to hit the ball with the ideal part of the bat.

If one or more of these things are not accomplished, then a hitter is more likely to see a negative outcome. If a ball is hit hard and is squared up but isn't hit on the right spot on the barrel, the result will likely be a high chopper or a towering pop up. If the ball is squared up and hit with ideal trajectory but isn't hit hard, the result is probably a soft line drive, routine grounder, or lazy fly ball to the outfield. These are easy balls to defend, and they should be avoided.

Achieving a WHB is not a hitter's only objective at the plate, as drawing walks and avoiding strikeouts are important. In the second installment in the series, I related WHB to strikeouts. In this case, a small relationship was found between avoiding strikeouts and recording WHB. This makes sense, because in plate appearances that end in strikeouts, there is no hope for producing a WHB as the ball is not put into play. Drawing a walk is a positive event for the opposite reason. As suggested in the installment about pitching, a pitcher's greatest strength could be his ability to get a hitter to chase pitches out of the strike zone. If a player draws a walk, he should theoretically have avoided chasing pitches outside of the strike zone at least four times in his plate appearance, which is very positive.

These three basic goals at the plate are important to analyze because they are repeatable skills. A player has direct control over how hard he swings the bat, when he swings the bat, and the quality of contact that is produced by the swing. Analyzing players by how often they achieve results like singles and doubles is inefficient, because a hitter does not have control over where a defense is placed or the weather conditions that may exist on the field. BABIP attempts to measure this, but it falls short in its choice to not include home runs or give context on how hard balls are being hit. When analyzing a player, it is best to look at the skills that are most directly in his control, and WHB theory allows for that to happen.

Going back to the pitching entry, WHB theory doesn't just stop at offensive players. Pitchers have direct control over their ability to limit WHB being put into play, their ability to avoid walks, and their ability to record strikeouts. This is where DIPS theory is found to be incomplete. Instead of assuming ball-in-play results (BIP) are the result of luck, it's possible to measure contact quality through WHB and see how effective pitchers are being.

In the first entry in this series, I related WHB theory to on-base percentage (OBP) and created the metric Well-Hit On-Base Percentage (WHOBP). WHOBP is a measure of the frequency by which WHB and walks are achieved per plate appearance. The metric excludes sacrifices and hit-by pitch scenarios as these are more of a product of situation and good fortune than repeatable skills (as an example, in sacrifice fly situations, a WHB fly ball is likely to be hit deep enough to produce the run from the sacrifice). When WHOBP was related to Chase%, a .64 R was found, which suggests that pitchers who get hitters to swing at pitches outside of the zone are the most effective at limiting WHB and BB.

Using WHOBP, K%, and Chase% to analyze pitchers is more efficient than DIPS because there is now a better way to look at BIP results than assuming that BABIP is a product of luck. Essentially, WHB serve as a "true outcome" of pitching. Due to the fact that home runs are often the product of WHB, they serve as an effective replacement for home runs. Therefore, pitchers should be analyzed by the WHB, BB, and K they are giving up (a new, modified version of the DIPS theory).

With the knowledge that WHB provide opportunities for effective analysis where current methods do not, I formed a new metric called the Standardized Metric of Aggregate Speed and Hitting (SMASH) in the fifth entry in the series. In theory, WHB should go for hits, which means that the run expectancy for them can be calculated if the average expectancy for a hit is found. These "linear weights" can then be applied to the values in the original WHOBP calculation to determine how much value players are accumulating per plate appearance, which created a metric known as Weighted Offensive Output (wOO+).

With the goal of WHB theory being to analyze player skills instead of player results, it is important not to forget the impact of speed. The underlying assumption with wOO+ is that a player's performance is solely the product of the value he produces through WHB, BB, and K. Since wOO+ lacked the ability to account for speed, I created a speed metric. However, it's not the case that raw speed is all that matters since players need to use their speed in games for its effect to appear. By looking at recorded running times, stolen bases tendencies, and GB/FB ratio, players were classified into different speed categories. This resulted in Speed Factor, or "SF", which was added to wOO+ to create SMASH.

The last major reason why WHB theory is more comprehensive and effective than other current metrics is its ability to account for the presence of luck. If the assumption is that every WHB should go for a hit, then WHB that don't go for hits are unlucky. Now, it isn't the case that all WHB outs are the product of random chance. Modern defensive shifting has created a more challenging environment for hitters because fielders are placed to defend against a hitter's skills and tendencies. Finding the frequency of well-hit outs relative to the league average creates a manner by which the net impact of luck and defensive placement can be measured. This is known as the Luck Factor (LF). LF provides a more effective way to discover why a hitter's skills aren't translating to results on the field (whether it is luck or the product of effective defensive placement).

Theoretically, WHB serves as a more effective manner of analysis than other comparable modern methods, and makes it is possible to create other new methods of analysis. One of the most important changes in analysis could come as a result of the Luck Factor. When defenses are placed, they are frequently shifted towards where a player hits the ball most frequently (see more in this article from Noah Woodward of The Hardball Times). However, the quality of fly ball/line drive/ground ball is very important. Since WHB have been shown to have a very strong relationship with offensive success (especially power), a defense's goal should be to limit those balls from landing in play as much as possible. To do this, consider the following diagram: 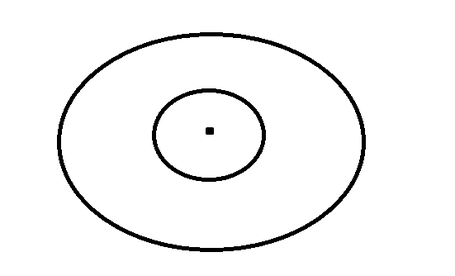 Let it be assumed that the dot in the center of the diagram is Angels outfielder Mike Trout. The ellipses around him represent two different scopes of range (neither is built to scale, they are just here for the sake of argument). The inner ring represents the range he has to reach WHB, and the outer ring represents his range to reach the entire body of balls put into play (that he and only he would be expected to field). Normally, his placement in the outfield would be based (making an assumption, here) around the concept of the outer ellipse, as it is ideal for him to be able to get to as many balls as possible. Consider then the following diagram: 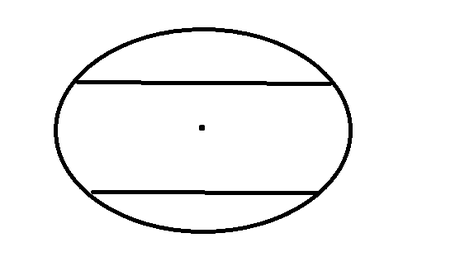 For the sake of argument, let the ellipse serve as the range in which a particular player hits the ball into play. The areas between the top line and the upper perimeter and the lower line and the lower perimeter of the ellipse serve as the place where WHB are hit into play and not fielded. This assumes that the WHB that fall in the upper section lead to extra-base hits and that those hit in the lower section are singles.

What WHB theory suggests is that Mike Trout should actually be placed based on the inner ellipse in the first diagram. If he can be placed in the ideal spot to field WHB off of a particular hitter's bat, then he can best prevent extra base hits (thus reducing the size of the upper section in the 2nd diagram). However, a negative consequence of this is that the area of the lower section in the 2nd diagram is increased. This is something that can be accepted if it is understood that those balls will remain singles due to Trout's ability to charge the ball, have his momentum charging toward the infield, and make a strong and accurate throw. If this defensive placement is used and extra base hits are traded for singles, the overall impact is a less effective offense.

WHB serve as an effective tool for analyzing a player's individual skills. By analyzing the process instead of analyzing results, it is possible to learn more about a player's strengths and weaknesses. Through the use of SMASH and WHB theory, it is possible to change philosophy in all realms of the game. Modern analysis has the flaw of using results (like hits, HR rate, etc) to analyze the process instead of using the process to analyze the results. WHB theory offers a way to tie skill to results, which serves as an effective tool for projecting future performance and more ideally placing defenses and building rosters.

Credit to Inside Edge, Tom Tango, Bill James, Baseball-Reference, FanGraphs, Rob Neyer, Marcel, and countless others for providing data and insight that went into this research and the writings.