Splitting up the Home Run Perception data in any way possible.

Share All sharing options for: A Closer Look at Home Run Perception

Last week, I unveiled Home Run Perception, which attempts to measure how long home runs are perceived to be. Now that there is a base of understanding, it's time to play around with HRP. I also mention home run damage (home run distance plus speed off bat). If you are unfamiliar with the concept, check out my basic overview.

I wanted to classify each home run based on its apex and how far over the wall it flew, since these are the two inputs into HRP. First apex:

And this is how I classified the distance past the wall:

Now we have 15 HRP classes and can look at how each class compares:

The HRP class titles above link to a video of the highest HRP home run in each class.

Towering bombs have the highest perception and the highest damage, and less than one percent of all home runs are categorized as such. 45% of home runs are "Regular Average" - an apex between 67 and 107 feet and anywhere from 3 to 47 feet past the wall.

For every type of distance class, the apex classes rank from towering to regular to line drive. Once the home runs get too short though, this ranking switches. I designed the stat to do this on purpose, since I felt that towering fly balls that scrape the wall just feel shorter than line drives.

Here are the top home run hitters in each class:

Perhaps you've noticed Adam Dunn's name atop many of the lists. His average HRP value of 75 is third among players with more than 20 home runs. Wily Mo Pena and Mike Carp are first and second. 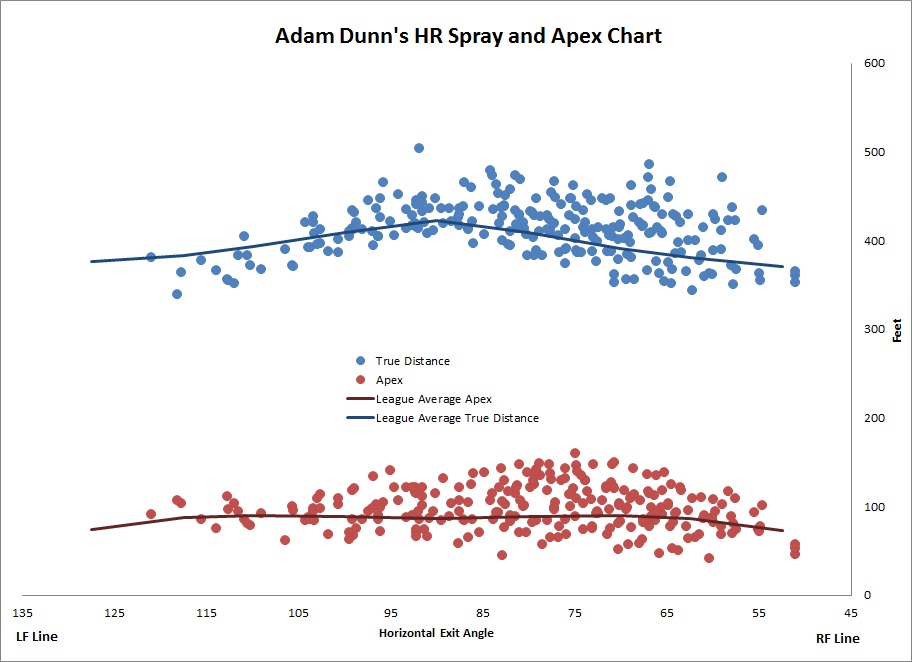 Dunn pulls a majority of his home runs, hits them far and hits them high, which leads to high perception scores.

Over 10% of home runs have a negative value past the wall, which means their true distance is shorter than the wall dimension I calculated. This has a lot to do with the wall dimension data, since most of these home runs occur to left and right field, but very few do so in center. Obviously there are some data issues that could be cleaned up with much more granular wall dimension data and actual landing angle instead of exit angle. This chart shows the exit angle spray and true distance of each of the negative home runs: 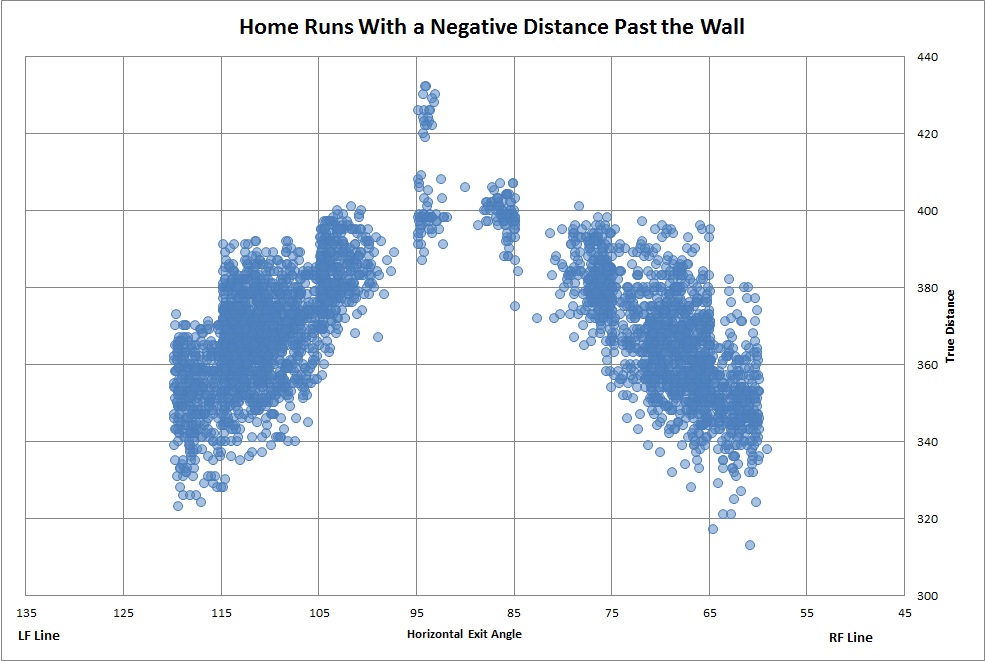 The next thing we can play with is perception by field: 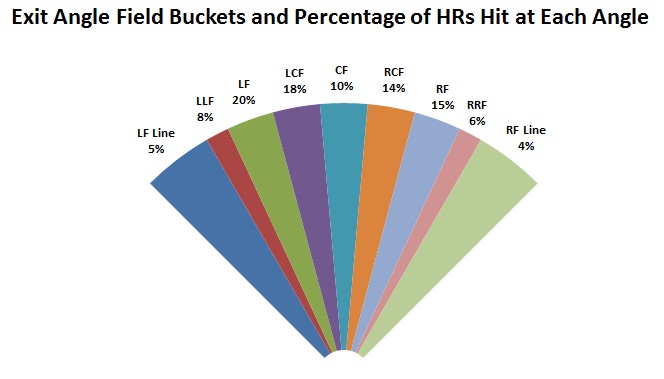 The highest perceived home runs are hit down the line and the lowest are hit to center field which makes so much sense. 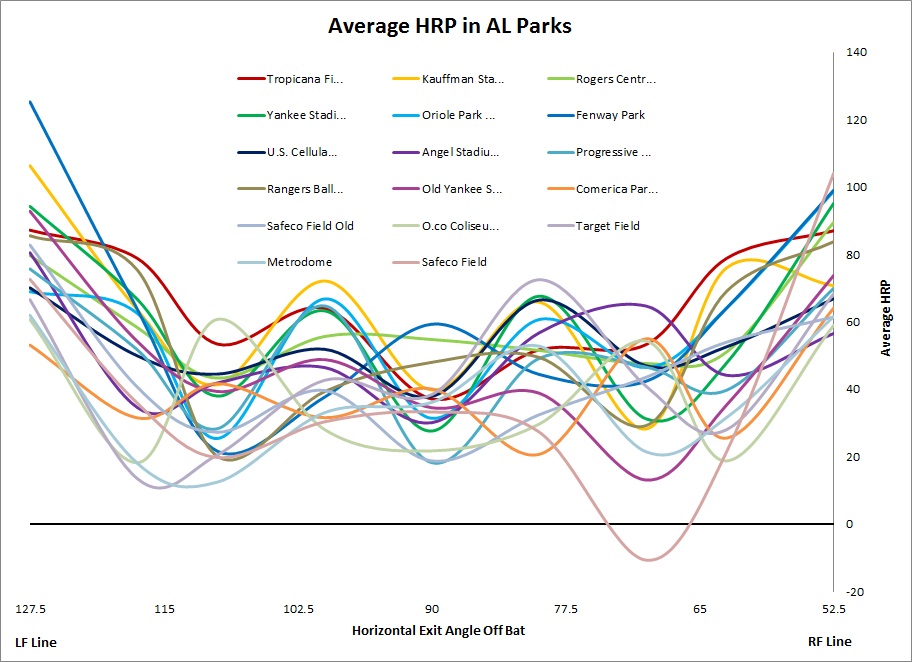 Fenway Park is an interesting study in the HRP stat. Since home runs have to be high to clear the Green Monster, they tend to get large apex scores. However, balls that land in the Monster seats don't have a high perception value in my opinion. Once they clear the wall and go onto Lansdowne Street, their perception spikes. Fenway also holds the mark for the highest average AL HRP in center field, due to the 390 foot dimension. However, right center drops back to 420 feet, making it necessary to hit balls a long way to get them out of the park.

The new Safeco field thus far has a negative average HRP in right field. This is another figment of wall dimension error. 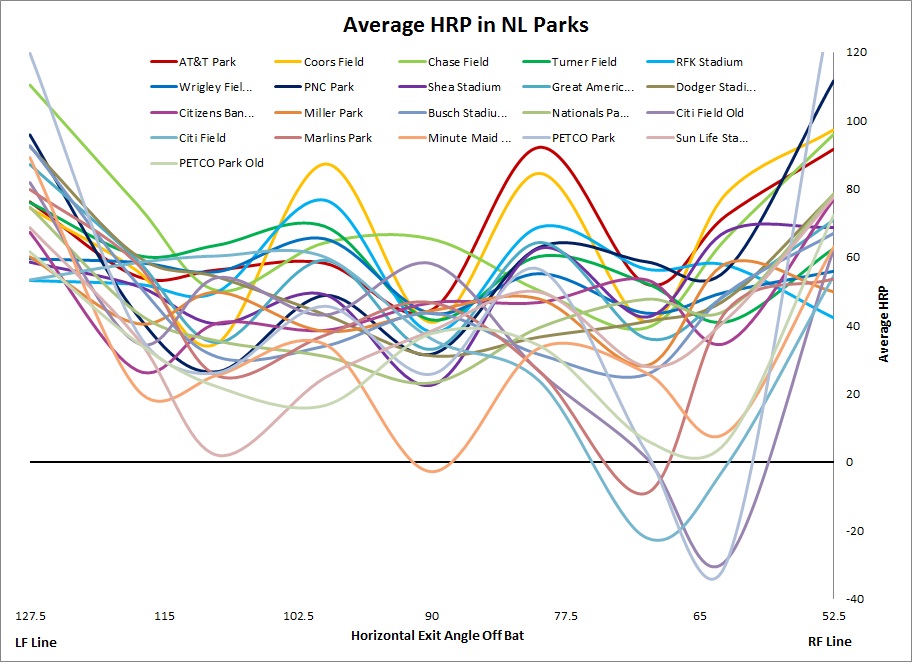 New Petco and Chase Field have provided some high HRP home runs down both lines, while Coors sticks out in the alleys. I believe the AT&T spike in right field is due to the odd shape of the wall. Home runs with a right field horizontal exit angle can have no chance but then curve closer to the line and land up in McCovey Cove.

After taking a deeper look into this stat, some pretty ugly data problems rear their heads. However, if we look past that, we do find some interesting, surprising, and obvious results. At least 37 of Adrian Gonzalez's home runs barely got over the wall. The highest perceived home runs are hit down the left and right field lines. Oh, and Adam Dunn is a beast.